Thanksgiving 2022 got off to a rough start.

As I'm still dealing with Long Covid, I never know when I'll wake up and feel well or not. Today was a "not."

I took something that I hoped would help and went back to bed. Only to get up several hours later and find the electricity had gone off. For the day.

So much for cooking any Thanksgiving food!

You might ask why that matters. "Aren't you in the Czech Republic celebrating at Malenovice with your JV team?"

No, we are not at our home in Czech for this Thanksgiving, but in Croatia, where we're on "exile."

This happens to be the nine-year mark for us. 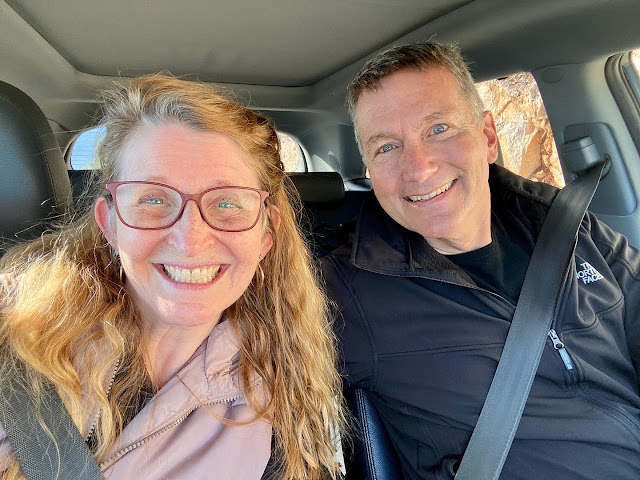 We've been here for three weeks and plan to be here off and on over the remaining months.

Lord willing, I will be able to travel with Dave later on, but for now, I'm not well enough. So we're sitting tight; I'm resting a lot and getting new medical help here in hopes God will use that to heal me.

Side note: I know God COULD heal me in the next five minutes! But because he hasn't chosen that healing route thus far, I've been in touch with new doctors as they look for ways to help me. 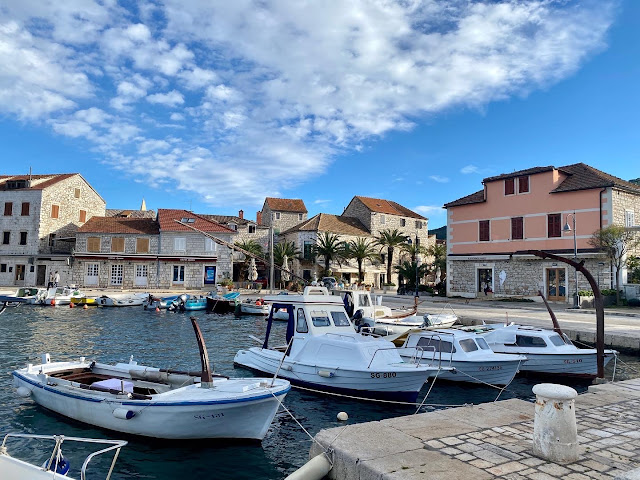 When we realized that the small Thanksgiving meal I'd hoped to make wasn't going to happen, we decided to drive to a nearby town to see if any restaurants were open. 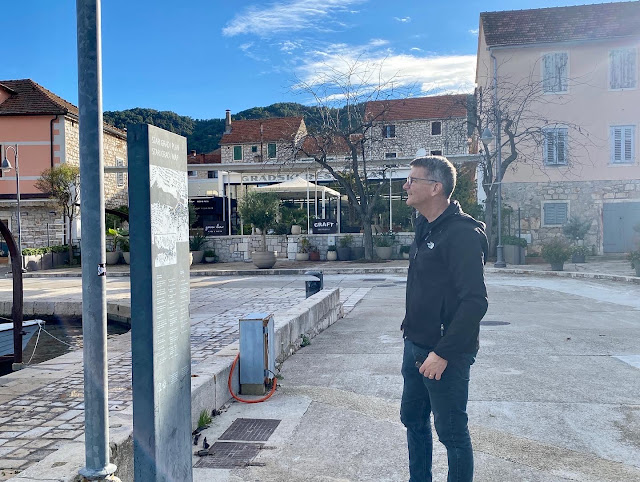 We're on the island of Hvar, so this is "off-season," and most everything, except the essentials, closes until April. So finding a restaurant open is not a given.
We walked through the entire town and only found one pizzeria and three coffee shops open for business.
Since pizza or just coffee didn't cut it for our Thanksgiving meal (I was hoping for at least some chicken and potatoes to make it feel more like the holiday!), we wandered a bit more, took a few pictures, and headed back to our car without a plan for what to do next. 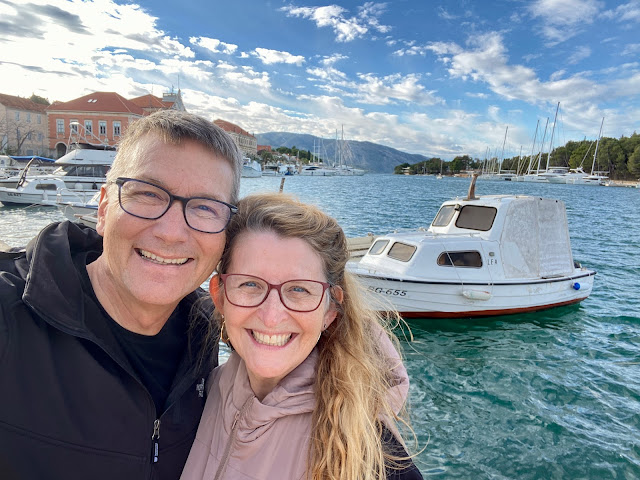 Suddenly, down a small cobble-stoned street, we saw the door open to a restaurant. Unsure if it was open for business or just being worked on for repairs (like some other places we'd seen), we walked over to it and were greeted by a cheerful young woman with these words.
"Are you here for the Thanksgiving feast?" 🦃 🍁 🥧

We both stammered a tentative "yes" and were then seated. In THE most darling restaurant, we hadn't known existed, called "Nook." 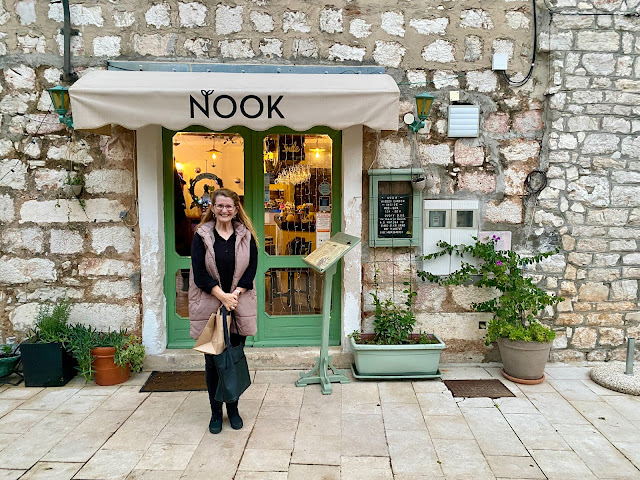 Over their three-course Thanksgiving feast, we heard how this restaurant came to be.
Dee is from Bosnia but moved to the US as a middle schooler and was there through getting her degree at university and working a job after that. Nino is from Scotland and has worked around the world as a chef. They met in Sarajevo when she returned to see family; he worked there as a chef. They fell in love and worked in other places before moving to Hvar and opening their own restaurant. In March 2020, just as the world locked down! 😂
But she said it gave them time to figure out everything before they could open that summer. They've been open ever since.
I haven't been to their restaurant before, but I can tell you that they have perfected their Thanksgiving menu - something she wanted to do for the foreigners, like us, who are on the island now! 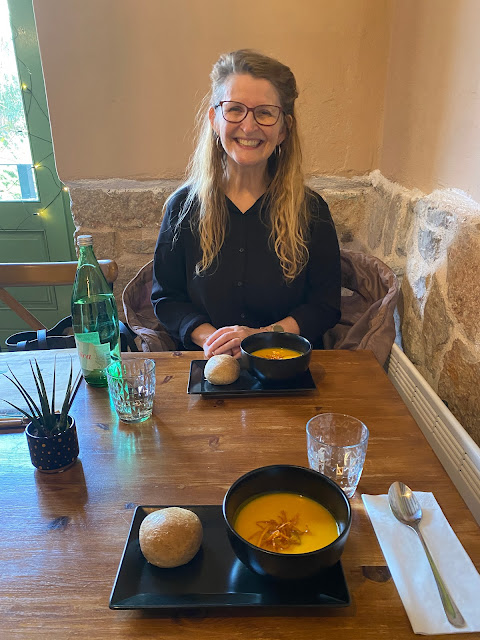 A delectable pumpkin carrot coconut soup started the meal, and it got better after that! 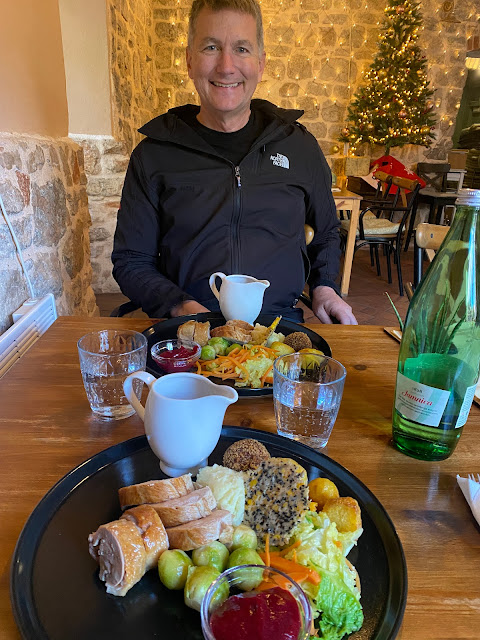 Turkey sourced from a grower in northern Croatia starred in the meal, along with all the trimmings, including stuffing balls and cranberries (which I've never seen here before!). It makes my mouth water just looking back at the photo. This meal rivaled any Thanksgiving meal I've ever had.
With no rush from them to hurry up and finish as they only had 20 reservations for the day (but had enough to let us in as two extras!), we enjoyed a leisurely afternoon at Nook before finishing the meal with coffee, apple pie, and homemade pumpkin ice cream! 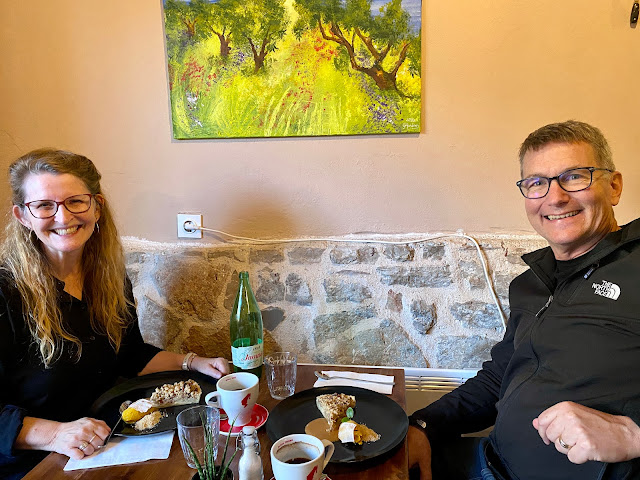 Dave had told me earlier in the day, when the electricity went off, "When things aren't going as we expect, we have to ask, "What's God doing?" and go there with Him."
This answer to our problem of not being able to have our Thanksgiving meal at home (or at Malenovice, for that matter!) was SO far beyond anything I could have imagined Him doing. He provided above and beyond...and then some!...through Dee and Nino. 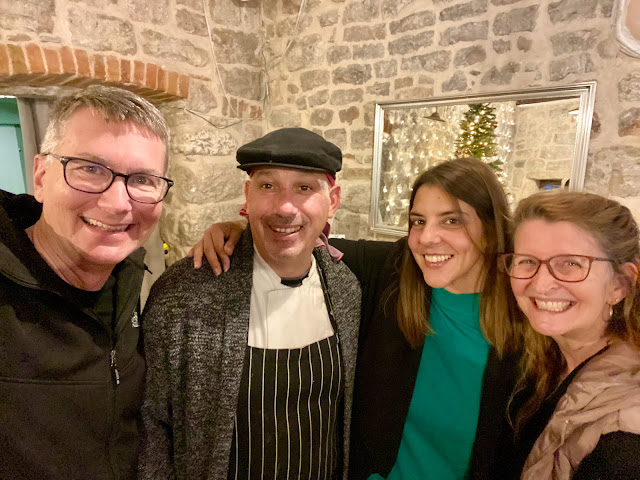 Also, He gave me energy for the afternoon to enjoy His bountiful gifts. That was also above and beyond, not the "norm" these days.
So I'm grateful in a new way this Thanksgiving 2022 for God's faithfulness and care, demonstrating again that He can provide whatever and whenever through whomever He wants!
He is so good!
Posted by Living By Lysa at 11:00 PM