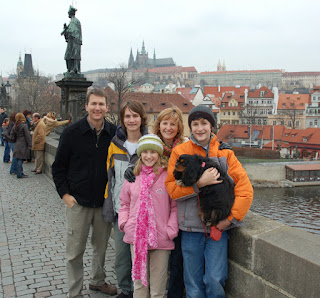 We took the kids out of school a day early last Friday and headed to Prague for a quick trip to the embassy for new passports, and then across the Charles Bridge into Old Town Square and the Christmas market to soak in the Christmas atmosphere...so fun!
After that it was on to the mall for some last Christmas shopping...reminded me of when my dad and I used to go out to shop for my mom on those last days before Christmas when I was a kid! That was fun dad! Wish I could've done it with you this year!

But then, the best part of the trip for me came...an hour and half drive to a village just outside of , near the German border of

Ever since I was a little girl I've had a dream. It started with a gift that my Grandma and Grandpa France gave me when I was seven. I remember answering the door at our house in , and finding a delivery man asking if this was the residence. After finding out they were in the right place, they brought a piano into our house - a surprise gift for our family.

I was talking to my Grandma at Christmas this year and she said it had been my Grandpa's idea - not that she didn't approve! But he just got it in his mind that someone ought to play the piano. If I remember right, he even paid for lessons for me that first year.

That began a life long love of music, and a skill that lead me to places I never would've dreamed of. I've always been so thankful for my grandparents' thoughtfulness and foresight!

But my dream has been to own a grand piano someday - one that had a heart and a song in it. For those who play the piano, you know what I mean. There are some pianos that you merely play, and there are others that play for you...they draw out the best in you. I've dreamed of having one like that.

When we moved into our new house here nearly three years ago, God provided a beautiful 120 year old grand piano that has partially fulfilled that desire. It's been a lovely piano to look and at a $400 price tag, was what we could afford at the time. But it didn't "sing". It merely played the notes and nothing more. So I continued to hope that one day God would provide again, and that this time it would be "the" piano for me.

On Friday the 22nd of December, God answered the dream of the little girl!

We drove out to a small village and to the home and workshop of a man who repairs, restores and sells used pianos. has been in contact with him for nearly a year, waiting for the time when he had a grand piano that was within our price range, and was that special piano that "had a song". A few weeks ago talked to him and he said he thought he might have the right one for us. So finally it was time to take the 7 1/2 hour trip to see!

After a walk through the dark village, the smell of coal burning heavily in the air, through a padlocked gate and into a non-descript looking warehouse, there sat "the one". It is a 1940 August Forster - a German made piano. When I put my hands on the keys and played the first notes, I knew I was home. It was the sweetest sounding instrument, with the touch and sound that was right to me.

We found out that this piano was bought and owned by one man for over 60 years. He was a composer in and played this piano much of his life. He died not long ago and his family decided to sell the piano as they had no place for it. This man in bought it from them, and now is selling it to us!! I couldn't be more excited!

He will deliver it to our house January 15th, so I have to wait a few weeks for it to be here. But since I've been waiting for nearly 40 years to have this grand, I guess I can wait a little longer! Pictures to follow when it arrives at its home!
Thank you Lord for making my dream come true!

PS. Side note to this story...my Grandpa France's mother, Katerina Soukup came from Plzen back in the late 1800's!!
Posted by Unknown at 3:41 PM No comments:

This is worth a giggle for a little Christmas cheer, 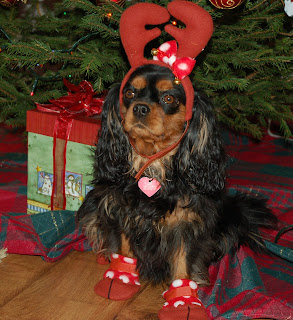 This is the nice thing about having your own blog! You can put in whatever tickles your own funnybone!
Posted by Unknown at 12:53 PM 1 comment: 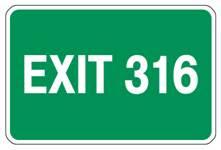 I know that this is unreadable to you, but it is UNBELIEVEABLE to us! It is a newspaper article on something that happened last Thursday.

Dave went to Prague to accept an award from the Ecumenical Council of Churches (made up of a representative from every denomination in the country, both Protestant and Catholic) for the "Best Ecumenical Act of 2006" - it was for producing and airing Exit 316. Going in to the awards Dave thought it was one of many awards that they give out. But when he got there he realized this was THE award that they give out for the year. Quite an honor!

Posted by Unknown at 8:58 PM No comments:

Email ThisBlogThis!Share to TwitterShare to FacebookShare to Pinterest
Labels: JV 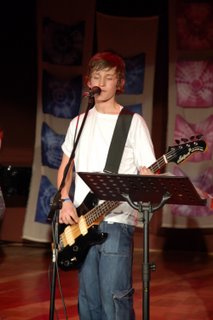 Back in 1967 a pastor in , had a burden for the youth of his church. Having seen a youth choir from , he was inspired to begin something similar for his youth and "TenSing" (short for 'teenagers singing') was born.
Today TenSing is a youth work within the YMCA and is in dozens of countries from Europe to . They are based on the idea of the three C`s: Christ, Culture and Creativity, and incorporate music, dance, drama, friends and faith into their program.
Why am I writing about TenSing? Caleb is a part of a TenSing group right here in Frydlant! It is an outreach to young people in our town, now led by Bogdan, the youth leader in our church, but first started by a young man named Jirka who was in our internship program at Malenovice. Last year he invited Caleb to be a part of it, and it has become a special and important part of his life!

This past Friday night they had their Christmas concert at the local music school and did a fabulous job! They mostly sing in English, choosing songs that talk about faith, God, and how that relates to their lives. Most of the young people in the choir are not believers, but that doesn't stop them from singing such songs as, "There's Nothing Better than Knowing Jesus"! We pray that as they sing and are a part of this group, they will come to know Jesus.

Caleb played the bass, sang and even danced during the concert - he was awesome! We were really proud of him and excited to see him a part of this group. 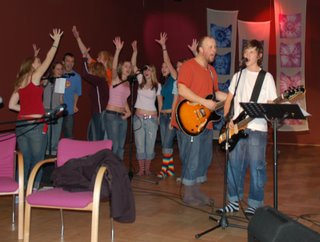 We had been in Czech for a little more than a year. I had a four year old, a two year old, and Claire was just a few months old. And life was a little bit hard. Okay, that's an understatement! I was WAY over my head! 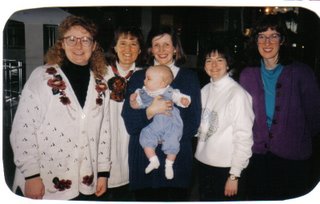 here. And as sometimes happens, He was in the form of four good women. Do you know what I mean? Sometimes God lovingly displays Himself in people that He places around us, and they touch us with His presence. Those four women were Lina, Laura, Andrea and Kim...all JV missionary women.

I don't remember who had the idea first...but somehow we decided that we needed to have an overnight with each other. In later years we'd call it a "JV Ladies Retreat". But that late February evening at a Polish hotel, it was simply five women who needed each other.

We laughed, we ate, we heard each other's testimonies, and we were the body of Christ to each other. It was the beginning of a wonderful tradition.

Eleven years later, we're still doing JV Ladies Retreats! They have grown in size, changed in locations, gone from one overnight to four (thanks to husband's and leaders who know the benefit of sending their wives and teammates away for time with other women!), and been a blessing each and every time.

This coming February, we will once again come together for a JV Ladies Retreat. Thanks to some inexpensive tickets on Sky Europe, a great low-season deal on a hotel, and other good provisions from the Lord, we're heading to Rome with 35 JV ladies for five days! Wh 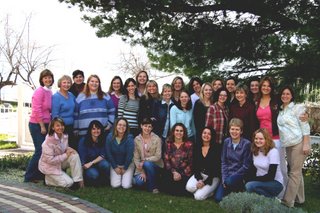 oopee! I can hardly wait!! Being with my JV sisters is such a joy and privilege.

As you look at these dear faces, ask God to bless them for their hard work, their sacrifices, their perseverance in the face of difficulties, and their obedience through it all...and pray that God will bless them with a sweet week in February of refreshment, joy and fellowship with their JV sisters.

And that we will have a great time in Rome!