Our new JV website was released yesterday!! Would love for you to go check it out!
http://www.josiahventure.com/
In two weeks it will have been 17 years since we moved here. Wow...how much has changed during those years! In November 1993, we were just two couples and our two kids!
I'm so thankful for great team of people God has called into this ministry since that time - nearly 200 on our staff now, and way more missionary kids than I can even count! I'm especially grateful for all that God is doing in the lives of young people and young leaders across Central and Eastern Europe.
I think you'll enjoy poking around the new website and reading about it all!!
Posted by Unknown at 10:23 AM No comments:

Outside my window...it's hazy/cloudy, leaves are changing colors on the neighbor's trees, 44 degrees
I am thinking...about where my family is today. Dave is in Wheaton, IL for JV Board meetings, and will go downtown to have dinner with Tyler tonight - they'll be sharing together tomorrow in the morning service at Grace Church of DuPage. Caleb and Claire are in Slovakia visiting one of our JV families and seeing the Exit 316 Tour there this week-end.

I am thankful...for six hours with a friend yesterday...coffee at a cool new cafe, dinner at my favorite restaurant.

From the kitchen...Lentil soup, gluten free blueberry-cinnamon scones and salad...having friends, Jonny and Lisa, to share it for dinner tonight.

I am wearing...my red Gull Lake sweatshirt and new, fuzzy, black Crocs that just came in the mail. Makes for a cozy, fall afternoon!

I am reading..."Hoping for Something Better" by Nancy Guthrie...a study on Hebrews. LOVING IT!

I am hoping...that this coming week will fly by.  Dave comes home a week from today - already ready to have him home again!

I am going...to call my dad and mom and tell them thanks for the Pumpkin Spice coffee syrup that they sent me a while ago so I could have my favorite fall latte this morning!

I am creating...a new collage on the wall outside my office here at home...have paintings and pictures at the framer and will pick them up on Monday. They are all original art from my kids, including the oil painting  that Tyler gave me for my birthday!

I am hearing...quiet, quiet, quiet. It's an odd feeling to be at home all alone...except for Lily, the dog, who is sleeping peacefully downstairs.

I am praying...for a supernatural work of the Lord in the lives of friends we are in the middle of counseling.

Around the house...and all around Frydlant - brilliant, beautiful displays of God's cleverness in giving us seasons! I sure love seeing leaves change into so many gorgeous shades of color.

One of my favorite things...latte and my Bible, sitting in my favorite comfy chair being with the Lord in the morning. 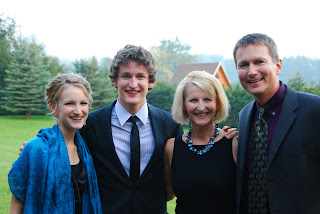 A few plans for this week...prepare the apartment over our garage for dear friends who are coming to stay with us for two weeks to check out JV!

A picture I am sharing...of our family all dressed up last week on our way to Claire's ball for the dance class she's taking.
Posted by Unknown at 1:57 PM 2 comments: 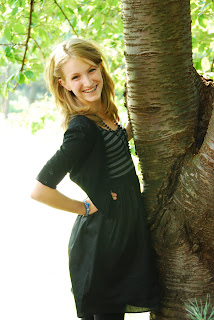 My girl is 16 today...so happy to celebrate CLAIRE on this day!!

Born in Germany, she came home to Czech 3 weeks after that...and has been growing lovelier ever since!

We started her day with gluten free pumpkin pancakes (my best pancakes ever!), then she was off to school.

She's out for tea with friends now, then will come home and get ready for her "pulkolona" - the "halfway through her dance lessons" ball! It's kind of cool that it's happening on her birthday..she will definitely never forget turning 16! Will for sure blog about that afterward.

Then tomorrow we're off to Vienna for the day to celebrate her! She wanted to go to the Albertina museum - there's a new Michaelangelo and Picasso exhibit there...and lots of other fabulous art. Gonna be a fun day...oh and a stop at the Starbucks next door is probably in order too!

When Dave and I married in 1987, Dave was not only leading Malachi Ministries, but he was also running a youth group on a military base in Karlsruhe, Germany. I got "grafted in" to the youth group as Dave's wife, and came to love those first youth group kids like they were our own children!

Through the years we've stayed in touch with many of those "kids" (who were only 8-10 years younger than us at the time!). We visited them when they were in college, had a reunion once when we were living in Wheaton, stayed in touch as they began to marry and have children, wrote scads of e-mails and connected through Facebook in later years...and occasionally we've seen a few of them.

This week-end one of our "kids" came to visit! She and her family are living in Germany now, so she was able to take a cheap Wizz Air flight from Frankfurt to Katowice and come spend the week-end with us.

The verse that came to my mind all week-end as we enjoyed time together with Tracey was from 1 John 3, verse 4 - "I have no greater joy than to hear that my children are walking in the truth."

It blesses me to know that the investment we made in Tracey's life years ago has borne fruit for many years since, as she has faithfully walked with the Lord!
Posted by Unknown at 10:41 AM 2 comments: