It's nearly 6 AM at our house here in Czech and I have been up for an hour already, finishing up my preparation for leaving on JV ladies retreat in an hour. If you're reading this during the week of February 26 - March 2, please pray for this time in Rome. 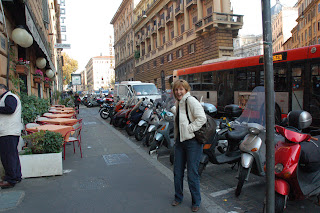 I am leading 35 JV women in a retreat with the theme of "Tending My Vineyard" It is my prayer that the Lord will meet each of us there in a special way as He carefully tends to our vineyards/lives.
I'm looking forward to sharing Rome with my JV sisters! Look forward to telling you about it when we get back.

Maybe I'll even get a scooter ride while I'm there!!
Posted by Unknown at 5:55 AM No comments:

Lessons from the Teacher 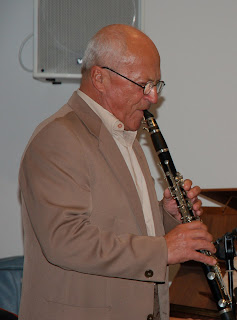 On Tuesdays at our house, Pan Surman (Mr. Sherman) arrives at 2:30 to give Caleb a saxophone lesson. The Lord brought him into our lives two years ago and we haven't stopped being blessed by this godly man.

This Tuesday was February 13th, the year anniversary for Pan Surman to have had surgery to remove his entire stomach due to cancer. When we heard last year that he had a ten pound tumor in his stomach and that the only way to even hope for recovery was to remove the tumor and his stomach completely, we weren't very hopeful. But we prayed and asked God to spare his life, and He did. But it wasn't until yesterday that I heard more of the story!

On the day of his surgery a year ago, he said he entered the hospital just as if he were going to the store or to walk his dog. He said he had no fear and knew that God was present with him no matter what happened. He went into the operating room, having told the doctor that God was with him and that he was resting in His will for this surgery.

Pan Surman said the doctor didn't know what to do with that! But said he'd do the best job he could for him.

They successfully removed the tumor and his stomach, but told him afterwards that short of a miracle, he would be getting radiation and chemotheraphy to rid him of the cancer.

At this point in the story, Pan Surman said to me, "Do you know what my favorite verse in the Bible is?" He then asked for a Czech Bible and took me to Mark 9:23

"...Everything is possible for him who believes"!

He then told me about the morning after his surgery. He was laying on his hospital bed before the sun had come up, awake but unable to move due to all the tubes connected to him. All of sudden he said he saw something on the wall - it was as if the wall parted like a curtain and out stepped Jesus!

"I've never seen Jesus before, but I know Jesus and I knew this was Him", he said with a twinkle in his eye.

He said Jesus was about average height and looked unremarkable except for his eyes and how they looked at him...he said they were full of love. And then Jesus spoke.

"Ed, I have already healed you of the cancer. It's completely gone. But I did this because I've still got work for you to do on this earth. Tell them what I've done for you, and wait for me to show you the work I have for you."

And then Jesus was gone. But Pan Surman said he believed from that moment that he had been healed, and never forgot what Jesus told him. And that every morning since then he has woken up remembering how Jesus came to him, and what a comfort that was.

Well, when they did the testing in the following days, you can guess what they found...or didn't find! There wasn't a trace of the cancer and he never had to have the radiation or chemo. He had just been to visit the doctor the day before being at our house having this conversation, and the doctor had said, "That sure was unusual what happened...and you're STILL cancer free...can't figure that out."

Pan Surman replied, "Oh that's easy! Jesus came and told me I'd been healed...and I believed Him!"

He said he's still trying to discern what it is that God has for him on this earth. But I think he's already living out part of that work by giving glory to God and testimony of what belief can do if God wills it! I can't help but think how pleased Jesus must be with Pan Surman and his belief.

The last thing he said to me was, "I told the doctor yesterday that God doesn't do things halfway - he does them completely - like how he healed me!" Praise God for his faith and testimony!

I wonder what his doctor is thinking about these days!

We said good-bye to Tyler tonight as he headed off to Poland with our friends, Laura and her son Jacob. He will spend the night with them tonight and then head for the airport in Katowice very early for his first ever flight alone to the U.S....thanks Laura for getting up so early with him!

My mom, dad and brother bought a ticket for him about six weeks ago after seeing that his very favorite band, "Switchfoot" was going to be in their town, (Eugene, Oregon) for a concert. They decided that it would be a really special and memorable thing if he came and they all went together (very brave of my parents!) to see them! As my dad says, "We're going to rock out"! I can hardly wait to hear about that!

So off they will go on Friday night to the old McDonald theatre in Eugene where I used to see movies when I was a little girl...like "The Gnomemobiles". Anyone remember that unforg 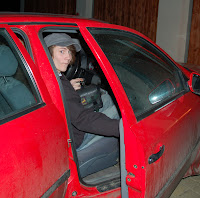 ettable movie?! The theatre has now been renovated into a live concert venue which is kind of cool for me to think of my son going there after all these years since I last went!

He'll be there for about ten days, soaking in all the goodness of Grandma, Bapa and Uncle Mike...root beer, Taco Time, Fred Meyer, Old Navy...just a few of the soon-to-be-had highlights!

We'll miss him while he's gone but I'm so excited that he gets such a special opportunity to be with his grandparents and uncle!

Email ThisBlogThis!Share to TwitterShare to FacebookShare to Pinterest
Labels: Tyler

Yesterday was a very special day for me! My grand piano arrived!

As I wrote in December, we had driven across the country to look at a 60 year old piano that was being restored. Happily we found that it was "the" piano for me and purchased it. A few delays with the restoration, as well as poor weather conditions, changed the date for delivery several times. But God was so good and in the end, had it delivered on the perfect day!

Dave got home from his 12 day trip away on Thursday night. While we were having dinner he received a phone call from the man who had restored the piano saying he would deliver it the very next morning. Out of a five week period of time, this was the ONLY day that Dave was home for the delivery! And it happened to be a day off of school for the kids (end of the semester break) so they could be home for the delivery as well!

True to his word, the man was at our house at 9:30 on a bright, sunny Friday morning. While Dave and Tyler were already up, we had wake Caleb so he could lend his muscles to the task of getting it in the house...that was no small task and a feat of strength for the guys!

I was giddy with excitement as they lifted it out of the trailer, carefully maneuvered it up our driveway and sidewalks, slid it over the door frames and on into the house...it was like having a baby delivered! Lots of hard work, but oh so worth the wait...a nearly 40 year wait!!!

After the plastic wrap was off, the legs had been attached, the stool set in place, and the lid lifted, I got to sit down for the first notes. Do you know what I played? "Great is Thy Faithfulness"!! I'd been thinking about what song to play for weeks, knowing in my heart that I wanted to honor God for this gift to me (and to our family). That was the song that rang over and over in my heart as I contemplated what to play. And it was a joyous moment to let it come from my heart, through my fingers onto this lovely instrument.

Truly, God is faithful and good and loving to His children!!

One last side note...I got to talk to my grandma yesterday afternoon to tell her the news. I knew she'd be thrilled since it was she and my grandpa who first gave me the opportunity to play the piano by giving one to my family when I was 7 years old.

My grandma (almost 95!) had a stroke two weeks ago and after a week in the hospital is now in a rehabilitation center trying to regain mobility and speech after being paralyzed on one side. While words don't come easy for her right now, she could hear my joy through the phone and share it with me. How meaningful to me to be able to tell her that my dream was fulfilled!!

Praise the Lord! "Sing to the Lord a new song. Sing his praises in the assembly of the faithful!"