Running a Half Marathon

The last race I ran was in 4th grade. It was the 50 yard dash. I didn't win. But today I ran a half marathon! 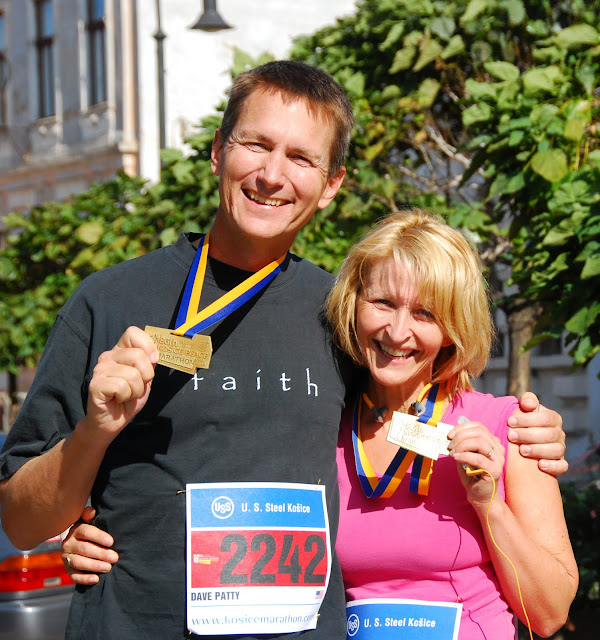 Athletics have not been a major part of my life...okay, not even a minor one! In high school I did music, drama, and student government. College years were even more about music, with little to no athletic activity.

In the years following that I attempted to jog now and then, but had no real motivation to do it, not to mention any self perception of being athletic.

But a year ago, when we switched our diet to deal with Caleb's ongoing stomach problems, I took some time to evaluate where I was at personally in my body. 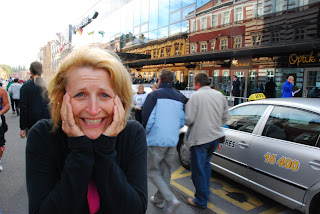 In more recent years I had tried weight training in an attempt to stave off middle age weight gain, but had not stuck to it and gained back what I'd lost.

However, since we were going to a much more simplified and healthier diet, I decided to seriously give weight training another try and see if I could make a lifestyle change.

This was all with much prayer and conversation with Dave. As I began to weight train, there were other issues inside me that began to come out...such as my incorrect self perception of not being a person who could be athletic or in shape. We spent many evenings praying through these things and asking the Lord to change and heal those incorrect perceptions. 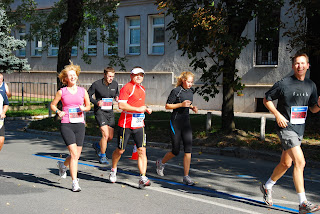 As the months went by, I added in running to the weight training and was surprised to find out out I really liked it! This, along with the changes that were happening inside me, is what led me to consider training for the half marathon.

In May I did some searching on the internet for half marathons that were within reach and found one in Kosice, Slovakia - about a five hour drive from us. I calculated the training for it and felt like I could do it in the coming four months so...registered and began training!

You have to know...the farthest up to this point that I'd ever run was 2 kilometers at a time! In the weight training, I was only running for short 5 minute bursts in between sets. You wonder how I knew I liked running, right??! I know...it's kind of crazy. And even crazier that I thought I could train for a half marathon with practically no running before this. 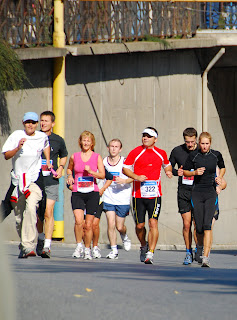 But I felt like it was part of what the Lord wanted to do to solidify the changes that He'd made in me...for me to do something that was so far beyond me, and yet within reach because HE was leading me to it.

So off I went, following a half marathon training schedule. And let me tell you...it was brutal at the beginning. There were SO many days I thought to myself, "What in the heck am I thinking???"

But with the Lord's help, and Dave cheering me on, I persisted with my training throughout the summer. Dave has been a runner for years (ran a marathon with his brother when he was in college) so was a major help and inspiration to me along the way. He also said he'd train and run the half marathon with me - a really sweet offer considering that he could have run it much faster than me!

The longest run I did during my training was 17 kilometers...not as far as the 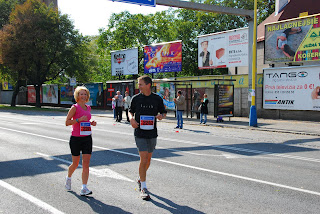 half marathon which is 21 kilometers (or 13 miles). But I was consistent in training, for the most part, and just kept putting in the kilometers, day after day after day.

Two weeks ago Dave left for Australia where he was speaking for a conference. So my last two weeks were completely on my own. You can't imagine how many times I didn't want to run!

But running, I've found, is often more about your mental ability rather than your physical ability. So with the Lord's help, I fixed my mind on the goal of finishing and persevered on.

Saturday the 3rd of October came.

The kids and I piled into the car, along with our little dog, Lily, and headed off to Kosice. W 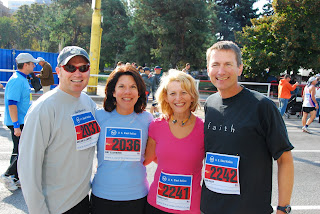 e met up with our dear friends, Mel and Amy Ellenwood, because they too had trained to run the half marathon with us. It was so fun to share that with them, even running while we were on vacation in Croatia with each other!

Arriving in Kosice that afternoon, we headed to registration where we picked up our running packets, including bibs with our names and numbers, and the chip that goes on your shoe to calculate your time. As we were doing that, and then out and about seeing all the other runners, I felt like I was going to cry much of the time!! It was a super emotional experience as I was about to culminate my year of a lifestyle change.

That night at 10 PM, Caleb and I went to the Kosice airport where we picked up Dave...remember, he'd been in Australia and was just now arriving back in Europe in time to run this race with me!!! That is sheer will, determination and love after 42 hours en route!!

Waking up the next morning was a surreal experience. In fact, the whole day was! Several people had encouraged me to really soak in the whole experience, remembering what had brought me here, and relishing in the moment of being there.

I did both those things f 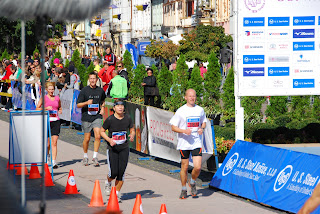 rom the moment I woke up until the end of the day.

One of the best moments was starting the race. Remember...the last time I'd raced was when I was 9 years old!! And let me tell you...this was NOTHING like that! It was a powerful, exhilarating, awesome moment. One of the greatest thrills of my life, I'd have to say!

The people of Kosice came out in droves for this race, and were literally lined up on the road, every kilometer of the way. I don't know what I would've done sometimes without their clapping and cheering...it motivated me and kept me going many times.

Caleb, Claire and the Ellenwood kids were in the crowds too - racing from point to point in hopes of seeing us and taking photos. They were an AWESOME encouragement!! Again...I don't know what I would've done without that! 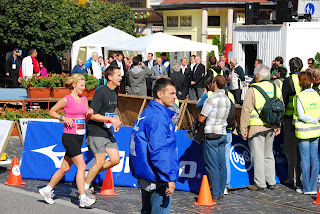 Of course Dave was so deeply encouraging to me along the way...especially at times when I didn't think I could keep going. He gently (and sometimes not so gently!) pushed and prodded, particularly towards the end when I was getting so tired.

The last kilometer was the killer - I really thought I was going to collapse in a heap! However, the crowds of people cheering that last kilometer helped push me through...NO WAY was I going to stop running in front of them!

Of course, the most glorious moment was crossing the finish line!! Exhilaration doesn't even begin to describe the feeling of having accomplished this seemingly insurmountable goal. I collapsed into Dave's arms, crying...no, sobbing...as I soaked in what I'd just finished.

Never before in my life had I ever had such a powerful, first-hand experience of Hebrews 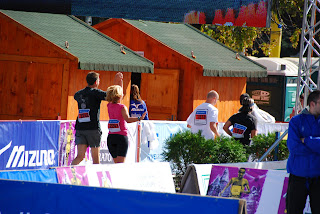 "Therefore, since we are surrounded by such a great cloud of witnesses, let us throw off everything that hinders and the sin that so easily entangles, and let us run with perseverance the race marked out for us. Let us fix our eyes on Jesus, the author and perfecter of our faith..."

I tell you...surrounded by all those witnesses cheering for us, giving every last bit of what I had in me to run to the end, and fixing my eyes on the finish line was I believe a taste of what it will feel like someday when I run to the finish line at the end of my life. At least that's how I WANT it to be!! I don't want to walk, much less limp, to the finish line. I want to RUN!! Just like I did to this finish line!

There was something so satisfy 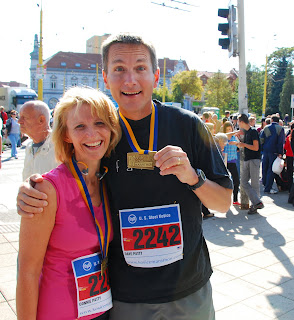 ing at having cast all caution aside and run with complete abandonment at the end. I don't think I've ever felt more proud of myself, except for maybe when I gave birth to our kids! :) That's the only thing I can compare this experience with, though honestly, I think this half marathon was even harder for me than that!

I am not an athlete in the classic sense...that I've been running or training all my life. But I AM an athlete in the sense that God has given me a fabulous body to use for HIS GLORY!! And that's really what this was all about. Doing something that displayed his glory in me.

So while I celebrate what I did...I celebrate even more, what He has done in me. I am definitely a work in progress. This isn't the end!

But it sure was an awesome moment at the finish line in Kosice!!!