A Diagnosis - the Full Story

"I waited patiently for the Lord to help me, and he turned to me and heard my cry."

PRAISE GOD! After years of pain, the Lord heard our cries for help. We finally have a diagnosis.

During a two hour test that was administered yesterday at Cleveland Clinic, Dr. Cheng was able to determine what has been troubling Caleb for over ten years.

After giving him an epidural, they performed different blocks on various sets of nerves, noting what caused his pain to decrease. When they got to the muscular wall of his abdomen, the pain quickly dropped from a “7” to a “1”. Dr. Cheng discovered a particular set of nerves that had been damaged during Caleb's intestinal surgery ten years ago. He came out to see Dave in the waiting room immediately following the test to tell him, "I finally have a handle on Caleb's pain."

Those are definitely some of the sweetest words we've ever heard!

They had begun to suspect nerve damage earlier in the week, but didn't know for sure until they administered this test.

This type of damage affects the “somatic” nerves and causes sharp, severe and persistent pain (Caleb can certainly concur with that). There is a lot of information out there about somatic pain, but not much about the nerve damage that causes it.

This explanation from the American Academy of Family Physicians was helpful to explain why it was so difficult to diagnose.

But the Lord brought Dave and Caleb to the very place where there were doctors who understand this problem! HALLELUJAH!!

The fact that Dr. Cheng did this test personally is significant. As head of the department, he only administers this procedure personally three times a month. On Wednesday it was determined that Caleb needed this test, but usually there is a long wait to get it.

For whatever reason (thank you Lord!), Dr. Cheng said he would work Caleb in at the beginning of  Friday, even though he was already completely booked with other patients getting the same test. If he hadn't done it that day, Dave and Caleb would've been waiting much longer to get results.

The good news is that we know what is going on.

On the other hand, it also means his pain is chronic. Dr. Cheng says Caleb is an excellent candidate to be implanted with a neurostimulator, which is a device that interrupts the pain signal before it reaches the brain. It is surgically placed under the skin and delivers a low electric impulse to the spine that blocks the pain.

Caleb returns to Cleveland Clinic on September 5th for a check-up and final evaluation for getting the implant. Several weeks later he would be fitted with an external unit to make sure that it does indeed reduce his pain. If the conclusion is yes, then a few weeks after that he would have the device implanted. This implant has an expected battery life of up to 9 years, at which point the batteries can be replaced with a simple procedure.

All this means that he'll be spending some time on the bus between Chicago and Cleveland in the coming months. Thankfully it's "only" a 6 hour ride, and there is wifi on the bus! He'll have to miss a few days of classes at Moody here and there, but hopefully within a few months, this will all be taken care of.

In the meantime, they've given him other non-drug options to help manage the pain. And he will continue to have to exercise the mental strength and endurance that he has excelled at for quite a while now.

So it's not over yet. But...just knowing what this is makes a tremendous difference for us, and especially for him.

For Caleb, enduring the pain knowing that it is not life-threatening or damaging anything internally, makes it more bearable.

It is also incredibly helpful knowing that doctors have validated the pain. One of the most difficult things over the years has been the questioning that has come - is it real or is it in his head? His relief of knowing it's not in his head, is HUGE!!!

Dave will put Caleb on a bus to Chicago this afternoon, and has a flight back home Sunday afternoon, arriving into Prague on Monday. Caleb has a week before he starts orientation at Moody so will stay with friends in the Wheaton area until then. Thank you friends!

This journey is not over, but we are filled with God's peace for what is ahead.

THANK YOU FOR PRAYING!! You have been faith-filled, loving and caring and we are so grateful for you. 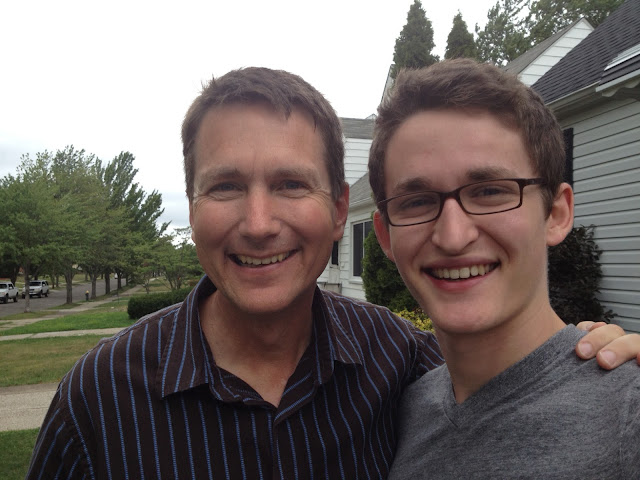