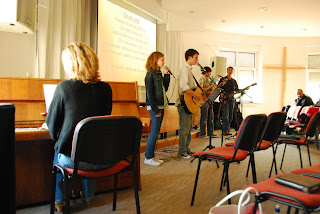 When Dave and I got married , one of the things he said to me was, "It's important to me that any kids we have play instruments".
Okay...good idea, I thought. I'd played the piano since I was seven, and Dave played a variety of instruments. But you know...when you don't have kids, and then when you do and they're really little, you don't think about those things very much.

When the kids were young we'd have family music time, with me playing the piano, Dave on guitar and kids singing. No one was especially interested or showed signs of wanting to learn an instrument though. Bummer for dad!


Oh, but Dave tried to get me to teach the kids piano! And really...I gave it my best shot! But it didn't take.

Some years went by and no one was going along with dad's "you have to play an instrument" theory.

But then, at age 13, Tyler got interested in bass guitar, and then in guitar shortly after that. Yay for Tyler, getting the ball rolling!

After that Caleb started playing sax, then bass, then guitar. And Claire started on the piano. Ahhh...dad was finally happy! He finally had his "instrumental" family that he'd dreamed of!

Well, yesterday was a perfect culmination of dad's desire for that musical family! It was church day up at Malenovice, and Tyler had leadership for worship during the service. As usual, Caleb, Claire and I were prepared to play and sing with him (we are one of the worsh 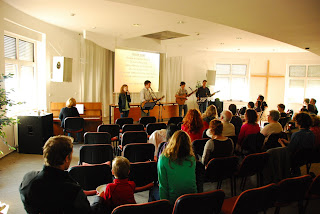 ip teams in our church).

But then Dave came in while we were practicing and well...it just didn't seem right that he wasn't up there with us. Somebody said, "Dad...can you play bass with us?" And that was all it took!

Dave thinks it's been about 20 years since he played, but that didn't stop him! He ran home and got it, and was up there playing with us before you could even say "Boo"! And did a great job, I might add!

It was such a lovely moment, the five of us all playing together. One of those perfect family moments...especially for one dad who had a vision for such a day 22 years ago! :)