Good News on a Sunday 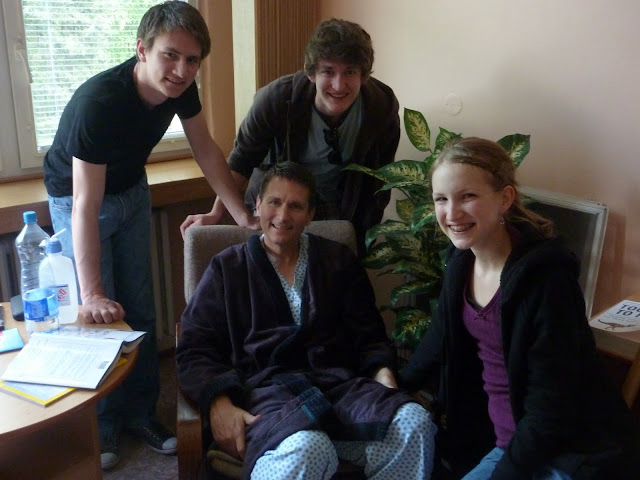 I don't know what kind of life Dave's surgeon has...he's been in to see Dave twice a day, every day, since his surgery, and was there again today, Sunday, when we went for a visit.
I hope he gets a day off here or there sometimes, but sure appreciate all the personal attention and kindness he's shown to Dave this past week.
The good news from him today is that they will definitely release him on Tuesday! So grateful that he is making good enough progress to be released from their care into mine! I'll do all I can to nurse him well during these next four weeks that he is to be in recovery from surgery.
Now that he's on the other side, the surgeon told him a couple more things about his surgery today.
He told him how little time there could've been before Dave experienced heart failure that could have been fatal - as little as two months up to just two years. If Dave hadn't had the flu in March and been weakened, he might not have experienced the arrhythmia which lead to him going to the doctor to find that the mitral valve was so damaged.
He told him that eventually the symptoms would've been bad enough that he'd know something was wrong...but that by that point it would've made repair very difficult. Replacement would've been more likely.
He told him that during the surgery he placed two Gortex "tendons" to the valve, but that when they filled up the heart with water to see how it was holding, it didn't. So they went back in and placed two more of the "tendons" so that it would hold.
We've been so impressed by this surgeon and his care and attention to details...even to fill Dave in on some of them! You know Dave...always like to "know"!!
It sure is good to be heading to the other side of this. How great is our God to have cared for Dave so faithfully through this!
It's 10 PM here in Czech and I just talked to Dave on the phone...he is in the middle of watching the Czech Republic battle it out with Russia for the world championship in hockey!! Kind of cool that he's in a Czech hospital watching the Czech team play hockey! Just seems kind of epic for him to watch it from there.
We've got it on at our house too, and it's about time for the 3rd period to start so have to go and watch the end to see what happens! GO CZECH!!
Posted by Unknown at 9:32 PM