The Night After Surgery 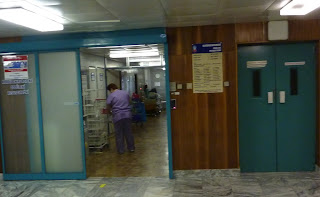 What a relief to have surgery behind us!
Dave's surgery to repair his mitral valve lasted almost five hours today, but in the end was successfully repaired and he is now in ICU recovering (pictured above...he's at the end of the hall!).
The surgeon met with me afterward (not common here...but he was kind enough to do it anyway!) and said that everything they set out to do was accomplished. I know from our cardiologist that it took longer than expected, and that there were some details of it that he will explain to me later...but he wanted me to know that the end result was good!
Mel and Amy sat with me in the waiting room while we waited today. One of the great, unexpected blessings of the day was having a believing nurse who is a friend of theirs, pull duty in Dave's OR this morning. How cool is that??!!
She came out to meet us just as surgery was getting underway, made a reservation for lunch for us in the cafeteria (at her expense...wouldn't let us pay for it...amazingly kind!) and then came out afterward with the good news of the surgery's success. What a blessing that was!
I was allowed into ICU to see Dave once he was out of the OR - again, not common here. The surgeon actually had to go in and ask if it was okay with the nurses! They agreed and then were SO kind to me as I stood by him while he still slept, praying and talking to him. He will never remember I was there, but it meant so much to me to see him after the surgery was complete.
They don't recommend family being there when they wake up...different than many people's experiences in the States, I know. So I left for home this afternoon and have just had some quiet, enjoyable time with the kids this evening, along with some great "boeuf bourguignon" from my Julia Child cook-alike friend, Sharon!
Oddly enough, the kids were given "flood holiday" today as we are experiencing torrential rains and flooding in our area right now. So they didn't have to go to school, and could instead have a quiet day at home together. Another gift today. They have the day off again tomorrow.
The nurses in ICU said I can come at 1 tomorrow, so you can bet I'll be there right on time! The surgeon told us earlier that he should be up by then, maybe even walking! I'm anxious to talk with him!
The surgery was done in a less invasive way - meaning he was not cut down his chest, but rather has a four inch incision on the right side, under one of his ribs. This should make for a better recovery, though the surgeon told us a week ago that it doesn't mean a fast recovery...just better. Good reminder to take it easy these next weeks and months.
Thank you for literally "flooding" us with prayers today. Usually a flood is not a good thing. But in this case, a torrential one is beyond compare!!
Will continue to update so check back tomorrow for more news!
Posted by Unknown at 9:12 PM