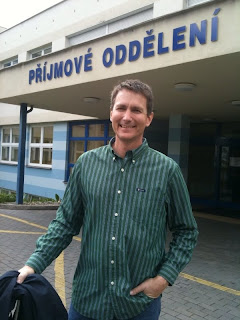 It's hard to believe that just a week ago today, Dave was on the operating table having heart surgery.
And today...he's home!
He hasn't had a lot of sleep in the hospital so is pretty tired - oddly enough it's hard to get good sleep there. Once he got home, he talked to Tyler and I for a bit, and then went to sleep. I hope he rests well in his own bed.
They were not able to regulate his medication while he was in the hospital so let him go home only if he would give himself injections twice a day...yikes! Good thing they didn't ask me to give them - not sure I could do that! But Dave was fine with it - said if that's what it takes to go home, he'll do it!
He'll be back at the hospital on Friday to check the medication levels, but as far as the mitral valve itself, the repair looked great on the ultrasound yesterday! Brona, our cardiologist friend who has been guiding Dave through this whole process, was so pleased to see how well the repair was done by his colleagues!
We're super pleased too! And grateful to the Lord for having revealed this problem early enough to fix it without complications.
Whew! It's good to be on the other side and have Dave resting just down the hall from my office as I type! Now we're onto the recovery phase of things...about a four week process if all goes well. He won't be working during this time - just obeying the doctor's orders to rest and recover. That seems doable!
We have our last family night tonight with everyone home - Tyler leaves tomorrow for JV intern training. He'll head to Vienna to meet up with all the other interns flying in, they'll do a team bonding "Amazing Race" for two days, then be at Malenovice from Friday until next Thursday - so at least we'll get to see him before he leaves for the summer! So thankful to have an evening together before he goes.
Posted by Unknown at 11:55 AM