When Dave first suggested that we vacation in Croatia, I wasn't very excited.

The Croatian War of Independence had only ended in 1995, and it was the spring of '97 when Dave brought up the idea of vacationing there. With Tyler, Caleb and Claire being just 2, 4 and 6 at the time, I had a hard time imagining that we'd find anything to do in a country so recently at war, not to mention that I didn't really know if it was stable enough to bring children to.

If it had not been for a Czech friend of ours who was leading tours down to the island of Krk in Croatia that summer, I probably would not have had the courage to go...at least not then.

This beautiful country is truly a paradise and has been a restful vacation haven for us since that first summer in 1997. We've only vacationed in three other places over the past fifteen years...all our other vacations have been here in Croatia!

It's hard to say exactly what it is that I love here...perhaps it's the contrast to where we live, which is also beautiful. But it's just so good to leave the beauty of the mountains for the beauty of the Adriatic sea. It fills up something inside me to be here in the warm sunshine, smelling the scent of pine and rosemary in the air, seeing the sparkling blue of the sea from our tent, enjoying it all with family and friends.

Not to mention that the best ice cream in the world is here too! :) 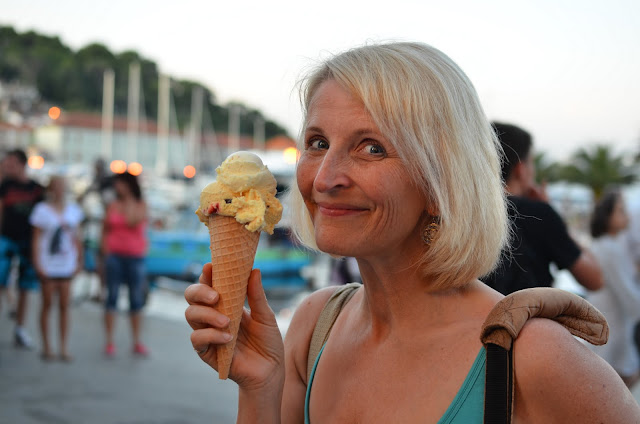 More photos to come later when it doesn't take so long to load them! I'm thankful to have some internet here in the campground...but it doesn't really like loading photos!
Posted by Unknown at 6:07 PM