In Brno to Celebrate

Dave and I are in Brno tonight, about two hours from where we live.

Tomorrow is the 20th anniversary of KVZ, an indigenous ministry to university students across the Czech Republic. We have known the leaders for almost as long as we have lived here and have great respect, admiration and love for their ministry.

Along with other aspects of the celebration, Dave will be speaking tomorrow afternoon on looking into the future. It's going to be a special day, looking back at what God has done through this ministry, and looking forward to what else God has in store.

They were so kind at putting us in a pension (a small hotel) near the city center. When we drove in this evening we couldn't help but notice all the people out in the streets, and wondered what was going on.

We were even more curious when we walked to the pension and people were just standing alongside the path!

A few minutes later, the reasoon for the crowds became evident.

Not only is KVZ in celebration mode, but so is the city of Brno! Tonight was the end of a week long city festival.

That might not have been so interesting except for how they chose to end it.

Standing just outside the door to the hotel, we watched a display of fireworks shot off from the castle overlooking the city, that was undoubtedly the best display I have ever seen!! It not only left me speechless, but even teary! It really was that beautiful! This photo from Dave's phone absolutely does not do it justice, but at least it's something! 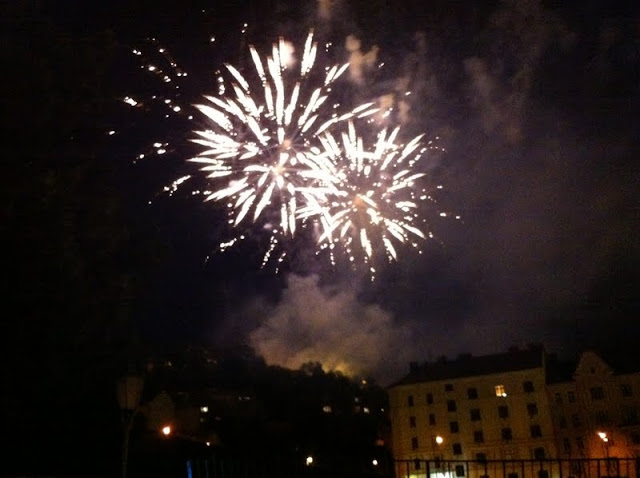 Do you think we will have fireworks in heaven? After seeing that tonight, it makes me hope so! I want to see that again!

I am posting this from my phone and it won't let me go back and make corrections. So thanks for enduring any mistakes!
Posted by Unknown at 11:15 PM