He has easily shared it hundreds of times over the past 18 years. But it never had an ending like it did last night.

Seven years ago there was a teenager in Slovenia that the team reached out to and began to pray for. They met her at a school where they were inviting kids to an English club (the beginnings of a youth group). She started going to that English club at Josh and Kristi's house (my brother and sister-in-law), and later to English camp.

Over the next several years she moved in and out of belief in God. She was drawn to him, and to the believers that she met, but never put her faith in Him.

Josh told me that the team banded together and began to pray her out of her dark clothes, literally and figuratively (she never dressed in anything but black during those early years). I can remember praying for her as well during those years.

She graduated from high school, still not having put in her faith in Christ, and went to England to nanny for a family. It was not a good experience and she ended up coming back to Slovenia three months later.

One day after she'd returned, she met with one of the JV team members who suggested that they get together with several others from the team to pray with her. She agreed, though was nervous as she didn't know what to expect from that time.

That night, after many hours in prayer (she said it felt like one hour!), she put her faith in Jesus. Six years after she'd first heard about Him.

A week later, she called Josh and said, "I think I'm supposed to be a missionary. How can I train to become one?"!!

They found a Bible school in Hungary for her to go to, and she just finished her first year there. God has put a particular city on her heart in Slovenia, where there is no evangelical church, nor has there ever been in known history. It is her desire to bring Jesus to the people there.

Dave finished the JV story last night with a letter that was written years ago to one of the JV girls in Slovenia, who had shared it with him all those years ago so we would pray for this girl:


"I really enjoyed when we were at Cajna Hisa (a tea shop in Ljubljana) and you were telling me the story about God's chosen people. I have never known the story about God..."
"The first time I came to English Club I realized that God is trying to find me. I think that with your help I will find him and he will find me."
"I have a lot of questions, But if I put all of those questions in just one question, I'll ask: What's the meaning of life? Why do I live? Why was I born? What is my "job" in life? Can you help me find the answers? Mana"

As he finished reading it, a small voice popped up from the packed meeting room at Malenovice.

Unbeknownst to Dave, Mana was there! She is serving as a JV intern this summer in Slovenia! She is next to Dave in the picture, along with Johnny and Brooke Stevens, JV staff who are her team leaders this summer. 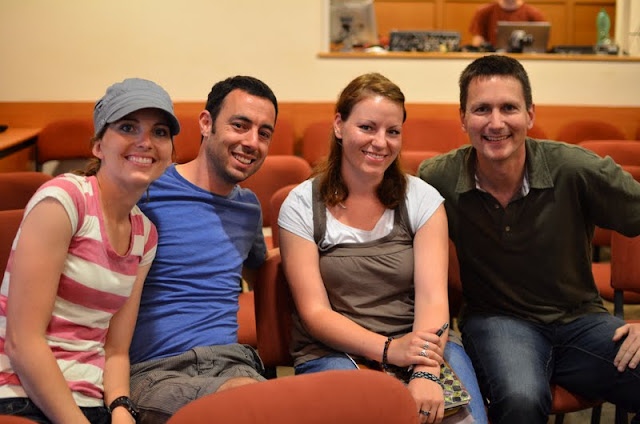 You NEVER know the impact of your prayers...or how long it will take for someone to believe. But we do know that God is in the business of calling his sheep to Himself.

What a delight it was to meet Mana last night, one of God's sheep that He pursued for many years, and finally brought home.

Would you pray for her? That God would use her to draw more of His sheep into the fold, not only this summer, but for years to come!
Posted by Unknown at 12:27 PM