I wish I'd taken photos on the way to Fusion last night! It was so fun to watch groups of kids walking through Frydlant, heading towards the place where our church meets. I knew that they were all going because of the Fusion concert yesterday!

When we left the concert in the afternoon, I prayed that students would be drawn by the Lord to the first Fusion practice later that day.

Generally they say getting 10% of students who were at a preview concert is considered a good showing.

But, I prayed for 60 students, about 20% of those who were at the concert. Can't hurt to ask for that!

After dropping off Claire, I again prayed, all the way home, asking the Lord to send those students. I could hardly wait to go pick her up afterward to find out how many were there.

As I drove up two hours later, I saw our friend Petr, with his three little children, coming out of the building. He and his wife, Lauren, are on the team for our Frydlant Fusion. Seeing him with their three children reminded me of all our years of leading youth group when our children were small!

There were FIFTY NINE new students who came to the Fusion practice! There were 79 there altogether, which included some of the Havirov team, as well as the new Frydlant team.

I don't know where the 60th student was that I prayed for! :) But maybe he or she will show up next Thursday night for Fusion practice! 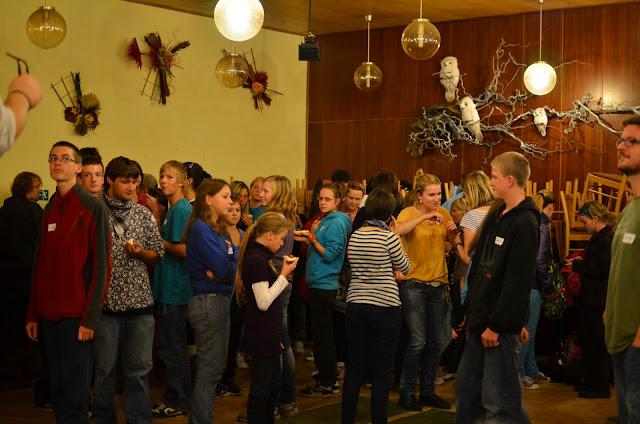 **Thanks for the photo Claire!
Posted by Unknown at 3:04 PM