The rest of the Krakow story

Caleb and I took off from home Friday evening, headed for Krakow with just one task...find the school where they're administrating the SAT. Simple enough.

I literally drove around in circles Friday night, in the dark, in the fog, trying to find this school.

Because Caleb had to be there at 7:45 Saturday morning, I didn't want to take the risk of not being able to find the school, which by the way, is OUT IN THE BOONIES! They might SAY it's the International School of Krakow, but it's no where near there!

I'd been on Google maps, Mapquest and Michelin maps, yet no one had a detailed enough description of how to get to this place. And...according to the school's website, due to construction, there was a detour to get there to boot. But I couldn't find it after an hour of wandering. (Objazd means detour in Polish!) 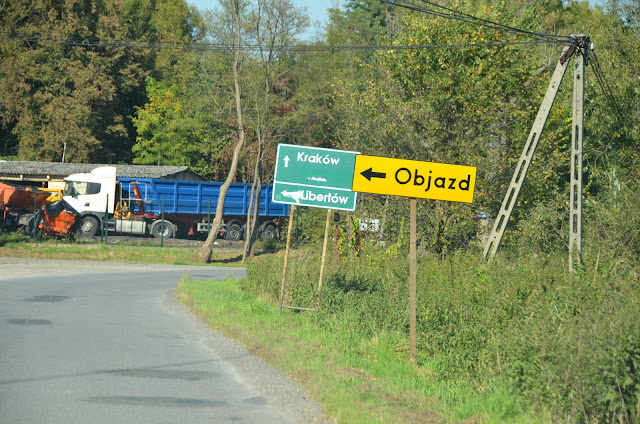 In the meantime while Caleb slept, I talked with the hotel desk clerk trying to figure out the directions with him (this hotel was only 4 km from the school and he couldn't figure it out...tells you something). After not a whole lot of success with him, I went up to our room and sat in the dark looking on the internet, trying to figure it out. At 12:30, I still didn't have much of a clue where we were going to go in the morning.

So in desperation, I wrote an SOS prayer request to a friend in the States, asking if she'd pray that we'd be able to find this school in the morning. Then I went to bed, though not to sleep...hardly slept a wink all night.

Side note...the day before, a friend of mine had given two pieces of advise for taking the SAT. Get a good night's sleep the night before, and eat a good breakfast that morning. At that point the good night's sleep was kind of out the window. And the desk clerk told me that on Saturdays they start serving breakfast at 8. We needed to leave at 7. So Caleb wouldn't get any breakfast either. This whole situation didn't seem to be turning out so well.

I woke Caleb at 6:45, and we were out the door by 7. My hands were literally shaking on the wheel as I started driving...and praying.

The desk clerk had given me directions that got us one km down the road, to the first turn off the main road. After that, we were on our own.

I didn't realize it when we made that first turn, but I ended up being behind a certain car for the next 3 km, as we drove out into farmlands of Poland. We got to a point in the road where the night before I'd turned around because it seemed I'd gone too far, and sure enough that car did the same thing - began to turn around.

As they did, I could see a dad holding a piece of paper over the steering wheel, and a daughter in the back seat looking anxious. Before they could drive off I pulled up beside them, rolled down my window and quickly asked, "Are you looking for the SAT school?"

The dad answered yes, and said that he thought maybe he'd missed a turn back 100 meters, and that I could follow them....which I happily did!

We made the turn onto what looked like a farmer's private road, and bounced over uneven pavement as we passed by cows, ducks, geese and even turkeys! 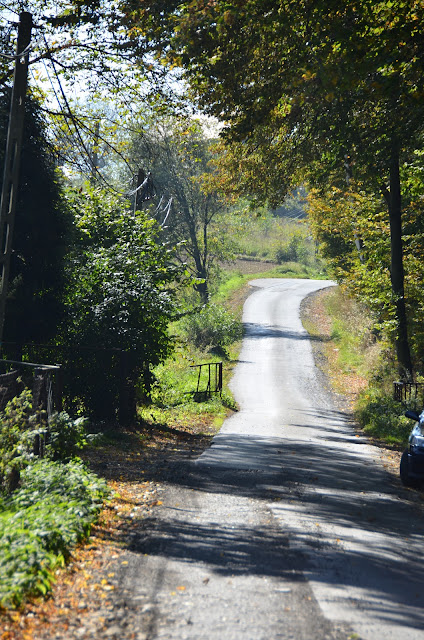 One more turn and we were on a road with a dead end sign (the blue sign you see here) that felt like it was going nowhere. 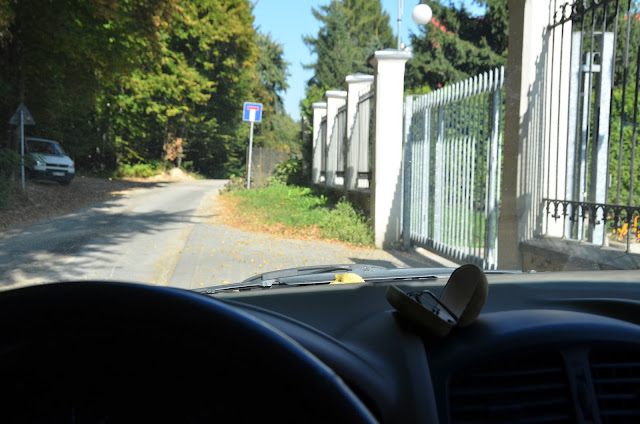 But, just a half kilometer down the road, there was the school! 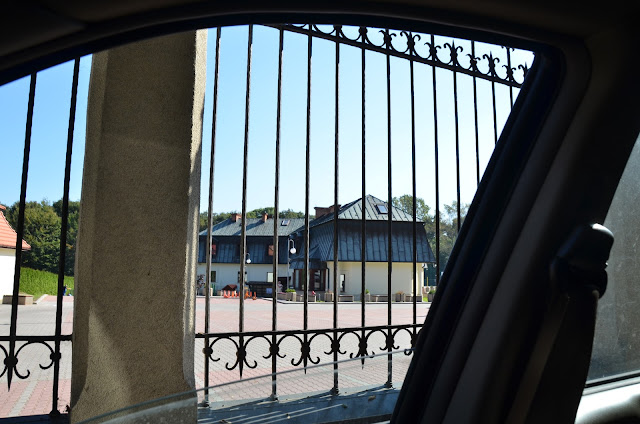 I was so relieved to pull into that parking lot and take Caleb in to get registered! 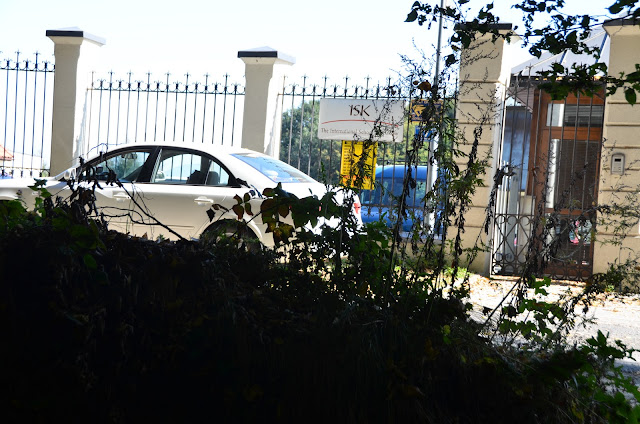 But this is not the end of the story!

After driving back over those tiny farm roads and back to the main road before the detour, I came up behind a car driving slowly. As I started to pass, I saw a familiar scene. A dad with a piece of paper over the steering wheel, and an anxious looking son sitting next to him.

Without even a moment of hesitation, I rolled my window down and said, "Are you looking for the SAT school?" Relieved, the dad nodded his head. I told him to turn around and follow me because it's complicated getting there.

But the story doesn't even end there!

Within about five minutes, I saw ANOTHER car on the side of the road. Same scene. Dad with a piece of paper, mom looking frantic next to him, and anxious daughter in the back.

I pulled up alongside of them, asked the same question, and told them to follow me too.

We literally drove back into the parking lot at 7:45 on the dot, the time they were supposed to be there to register. There is absolutely no way those kids would've made it there on time if the Lord hadn't placed me in their path at the moment he did.

A dad from one car, and the mom from the other, came over and thanked me (they were all Polish and even THEY hadn't been able to find this school!). I drove away with a huge lump in my throat, tears in my eyes, and thanks to the Lord on my lips.

I felt like I'd been an angel of mercy! :) I wonder if God's real angels ever feel such a sense of joy at having been able to help someone?

From there I went back to the hotel, had breakfast, drank a very mediocre cup of coffee, packed up, paid the bill, went to McDonalds for a bit better cup of coffee, then drove back to the obscure location and sat for four hours in the car while Caleb took his SAT.

But before I left wifi at the hotel, I checked my email. There was a message from my friend saying, "It's 7 AM your time and just praying for you before I go to bed. I am asking that the Lord will guide you to just the right way to take to the school so that Caleb doesn't have to go into the test already under pressure."

What an awesome answer to prayer, huh??!!! She was literally praying as we left the hotel, while my hands were shaking on the wheel! Oh God is so good to us! 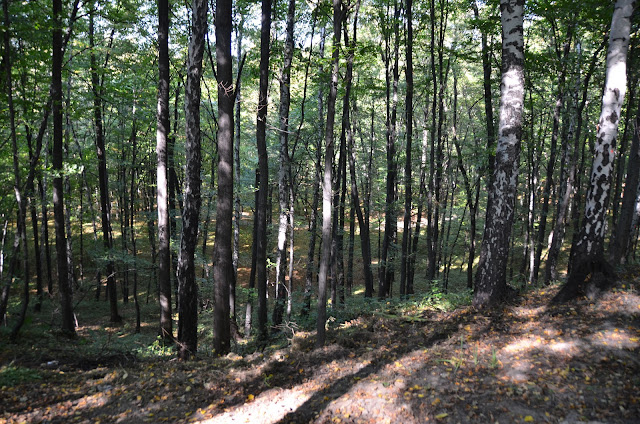 Caleb and all the others were finally done at 1:30. I was surprised to see how relaxed Caleb was coming out afterward. I'm glad he felt like the test went well!

As a reward, we headed downtown Krakow (nearly an hour away by the time we navigated traffic) to walk for a bit, then over to a mall for lunch. Nothing like spending a few minutes in historic Krakow, celebrating successful SAT's! 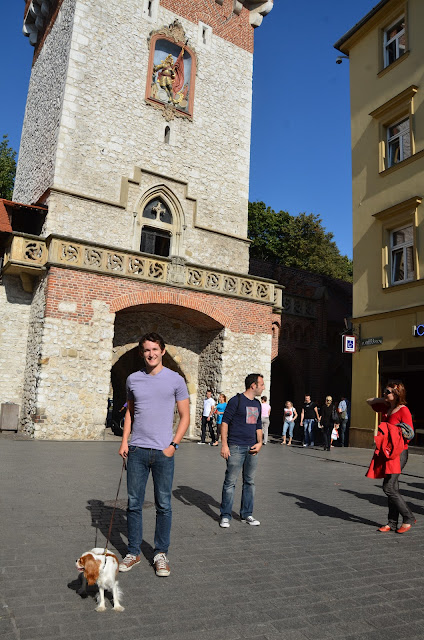 It had been a crazy day. But it'd been a good day...with much to thank the Lord for.
Posted by Unknown at 10:34 AM