Last night before bed, Dave told me that a friend of ours was coming over this morning at 10. It's not unusual for him to be at our house so I knew I could go about all I needed to do today with him here.

I didn't hear our friend come in as I was upstairs at the time. But after I'd finished what I was doing, I started to head downstairs to the kitchen around 10:30. That's when I heard something unusual.

Not only did I hear our friend and Dave talking, but someone's voice that I didn't recognize.

Hesitating on the top step, I waited a moment to see if I could hear who it was or what was being said.

The tone of voice was somber, and Dave's reply had a similar tone.

Deciding that it'd be better if I didn't interrupt, I tiptoed back into our bedroom to wait, even though I hadn't had anything to eat since getting up, not to mention all I wanted to get done downstairs.

Fifteen minutes went by. I tiptoed out to see if they were still there or if the tone of the conversation had changed. It was the same.

I checked again in 45 minutes. And then a half hour later. Still the same.

By this time it was noon and I was starting to wonder how I was going to get my list of things done, which included making dinner so it'd be ready for guests tonight.

That wouldn't have been a big deal if it wasn't for the fact that I had a meeting in another city that I needed to leave for at 1:30. I wasn't due to be back until 5, and our guests were arriving at 5:30. So I wanted to have dinner cooking on the stove before I left.

Time was ticking and I kept wondering to myself, "What should I do??"

Wanting to be sensitive to the conversation going on downstairs with the unknown guest, I thought Dave would appreciate if I gave them the privacy they needed. Maybe he was in the middle of sharing Christ? Or counseling? Or dealing with something difficult?

Whatever it was, I didn't want to bother them so quietly went back into my room and tried to figure out other things to do.

All the while I was thinking about what I wasn't getting done, yet feeling noble that I was choosing the greater thing by letting them meet in privacy.

Finally at 1:10 (I definitely had my eye on the clock by this time), I heard the kitchen door open and close. I figured our friend and the unknown guest must've left.

Rushing downstairs, I said to Dave, "Wow, I've been waiting to come down here all morning but I didn't want to interrupt you. Who was here with Petr?"

"There wasn't anyone here with Petr."

"But I distinctly heard another voice. You're sure there wasn't someone else here??" I asked hesitantly.

"I am completely honest. There wasn't anyone with me but Petr. It was just the two of us the whole time."

Wow. How did that happen??

I truly have NO IDEA what I heard those times I was at the edge of the stairs listening to snippets of their conversation. This has never happened to me! And I promise, I haven't "slipped a cog"! But I sure can't figure out what happened.

With no time left to make dinner, I rushed out the door soon after, shaking my head and... 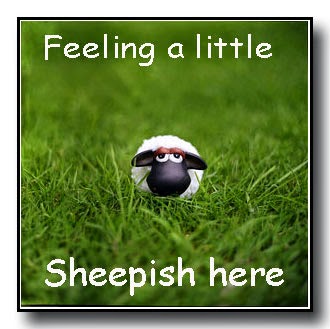 There really is no good moral to this story!

But I will say I made it home by 5:15 and had this homemade tomato soup and toasted cheese sandwiches done when our friends arrived. Fastest dinner prep ever! Sometimes you do what you gotta do.

Guess I'll never know what my ears heard this morning. But I'd like to think there was at least some virtue in trying to be sensitive to my husband and our guests guest!
Posted by Unknown at 9:45 PM