Today, now on the fourth revision of my book, I am feeling discouraged. Having been at this round of editing for ten straight days (seriously...all day, every day), you'd think I'd be well on my way to being finished. But nope. Not there yet.


This is an intensely emotional process, one that has taken up every nook and cranny of my brain as I've tried to read my work AGAIN with a fresh eye, reworking the words to make them sound right.

In a procrastinating step this afternoon, I went online and googled "revising and editing", ending up with this little jewel from an interview with none other than Ernest Hemingway:

Interviewer: How much rewriting do you do?
Hemingway: It depends. I rewrote the ending of Farewell to Arms, the last page of it, 39 times before I was satisfied.
Interviewer: Was there some technical problem there? What was it that had stumped you?
Hemingway: Getting the words right.
(Ernest Hemingway, "The Art of Fiction,"The Paris Review Interview, 1956)

Wow. That makes me feel a lot better. Yes, that's the problem: getting the words right. According to him, I've got at least another 35 revisions before I can really start to worry about my writing.

Aw yes, I've encountered that problem WAY too many times already as well. Sheesh. You just wouldn't think writing would be that hard. But it's proving to be that, at least for me.

“I’m all for the scissors. I believe more in the scissors than I do in the pencil.” Truman Capote, Conversations With Capote, by Lawrence Grobel, 1985

While it's more of a "delete" button kind of age, I get this! Oh boy, do I ever get it.

“Read over your compositions and, when you meet a passage which you think is particularly fine, strike it out.”
— Samuel Johnson

This quote made me laugh out loud! Do you know how hard it is to do that??? I had no idea I'd get so attached to certain words and paragraphs, almost as if they were sacred. Yet between my editor and me, many of those passages I thought particularly fine are gone now. Sigh. What a process this is.

No, I'm writing because I want to, because the words and story are in me and I want to share those thoughts, even if it's just for family and friends.

I also feel compelled by the Lord to get this done, for whatever reason. And I know he doesn't want it done in a sloppy, uncared for manner, but rather in his excellent way so that it speaks to HIS excellence. Yes, that's what I want - a book that truly speaks of him and what he's done in my life.

I press on for now. It's been a privilege to have these free days to work on it. Once Dave gets back from the GYI trip to Israel, life will resume its normal pace and then I don't know when I'll get to work on it again with this intensity.

But at least I now know that other authors have labored this heavily over their manuscripts too, and that it will be done when all the words are "right". And not before then.

Thanks for your encouragement today Mr. Hemingway. 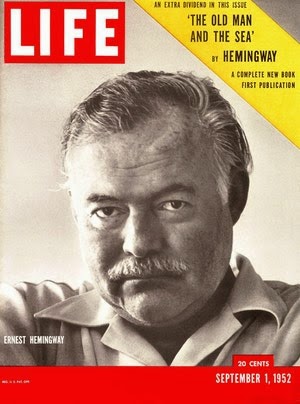