Two days ago, Dave and I were driving on the autobahn through Austria when my car suddenly died.

Our insurance company in Czech took good care of us, sending a local tow truck to pick us up and then deposit the car at a garage in the city of Graz so it could be looked at by a mechanic. Not only that, but they paid for a hotel that night.

This is where I woke up Wednesday morning. 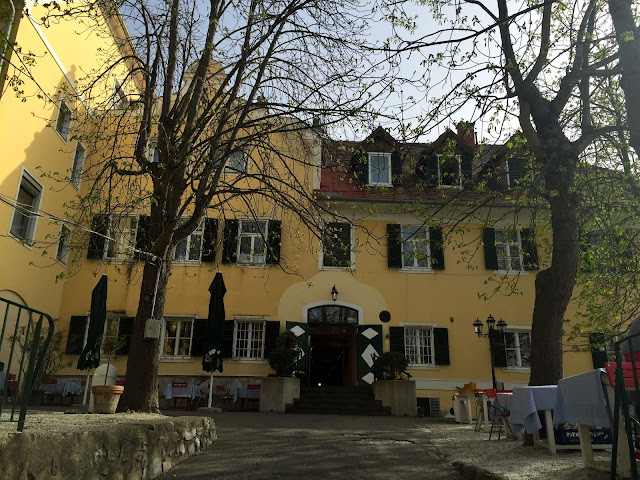 Dave did too, but much earlier than me. He was in a taxi at 6:30 AM on his way to the garage so he could be there at 7 when they opened in hopes that they could take a look at it first thing.

But of course they already had their work lined up for them for the morning, so it wasn't until 10 that they could finally take a look at the engine. It wasn't good news.

While he talked with them, I was talking to someone else. 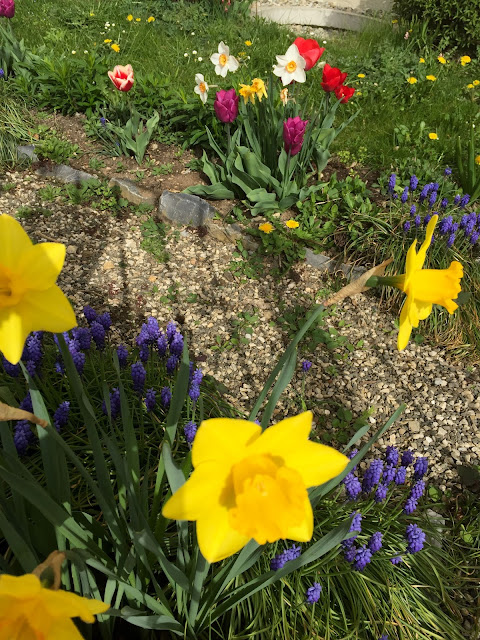 Although in human terms this turn of events came as quite a surprise, I knew it wasn't a surprise to the Lord.

And yet, I had some grieving to do upon hearing that the engine was gone when Dave called later in the morning.

We have no idea what happened. The mechanic said it would cost time and money for him to tear into it to find out precisely what went wrong, but his guess was that the timing belt slipped, broke some valves and the head, and that was that. No warning, no noise, no smoke, no visible damage. And yet, it was gone. 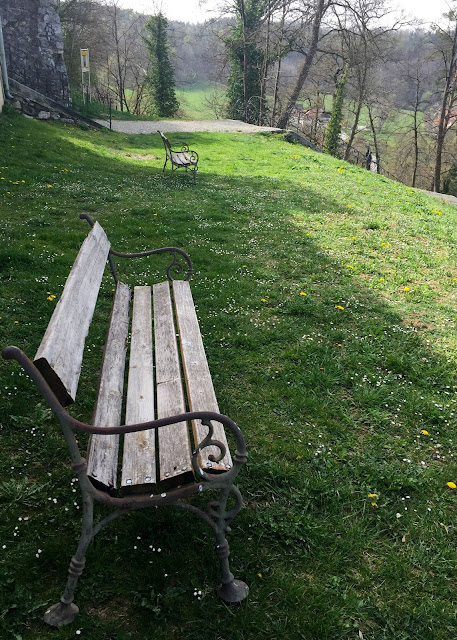 I sat on that bench processing this news the Lord in the afternoon, praying, trusting and believing him to take care of us, even though the situation looked rather bleak.

In the meantime, Dave stayed at the garage and tried to figure out our options. The mechanic gave him the rundown on what it would cost to repair the engine or replace it with a new one but those options came with a very large price tag. We called our mechanic back home in Czech and received similar news. It costs a lot to repair or replace an engine.

So Dave began to gather information about the used car market in Graz and see if there were any options available.

And we both prayed.

The garage that the tow truck had taken us to is also a car dealership for six brands, and has a used car lot. By mid afternoon, after doing a lot of research and going to look at various cars in the area, Dave determined that the best option was actually a car that was on their used lot. What an answer to my prayers in the afternoon! I had specifically asked the Lord that if he had a new car for us, that it be right here there in Graz.

Dave and I talked on the phone, prayed, he sent pictures for me to look at, we looked at our finances, and in the end we decided that God was making that car available to us (not to mention that the people at the dealership made him a great deal on it).

But then the question was: how to get money to the dealership to pay for it. They don't take credit cards, we don't have an Austrian bank account to wire from, and we certainly didn't have that kind of cash on us!

As evening closed in, and many rounds of phone calls and texts had gone back and forth across the ocean with our bank and with our folks in the JV office, all trying to figure it out, we went to bed asking the Lord to do a miracle in the night. 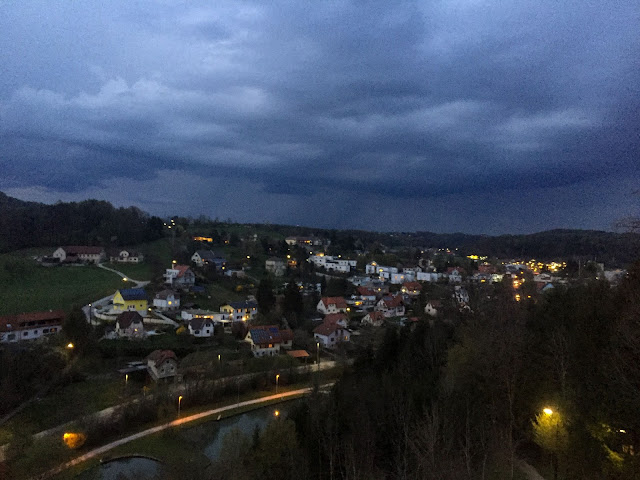 At this point I have to mention that there was quite a time crunch going on for us.

In Slovakia, our largest youth leader training event was starting Thursday evening (tonight) at 7 PM, and Dave was supposed to be the main speaker. It was a five hour drive from Graz so we needed to leave by noon in order to make it there with enough time for Dave to be ready.

We went to bed not knowing what we'd find in the morning, but praying like crazy that God would make a way for him to get there on time. And that we'd have a car to get there in!


Dave again had to leave early from our hotel (where we'd had to spend another night) to begin another round of trying to get money from a bank or from ATM's in order to have cash to pay for the car.

It is just too long of an explanation to say why that was so difficult (it mainly has to do with banking security in Austria) but perhaps it will tell you something if I say that Dave had to use four bank cards, pull cash 22 times from different ATM's, and in the end, plead with the car dealership to let us put the last $1000 on a credit card. That is how difficult it was to get the cash in hand to buy the car.

In the meantime, Kaylee and I waited at the front door of the dealership once, we arrived by taxi later on. It felt a bit awkward to be there with our suitcases, and was even stranger when the fire alarm went off and we were evacuated from the building.

How much weirder could this whole story get, right??!!

(The fire truck arrived just minutes later, while everyone was standing outside, but it must have been something back in the garage area because we were allowed into the building again after just ten minutes).

During this whole time I'd only seen Dave for all of one minute and actually had very little idea of what was going on - if we were getting the car or not. What a strange feeling, to know that we'd most likely be leaving our old car; a very sentimental one at that since my dad had bought it for me 9 years ago - it was used back then, but had been such a great car all these years.

Yet I didn't know if we were getting another one to replace it. 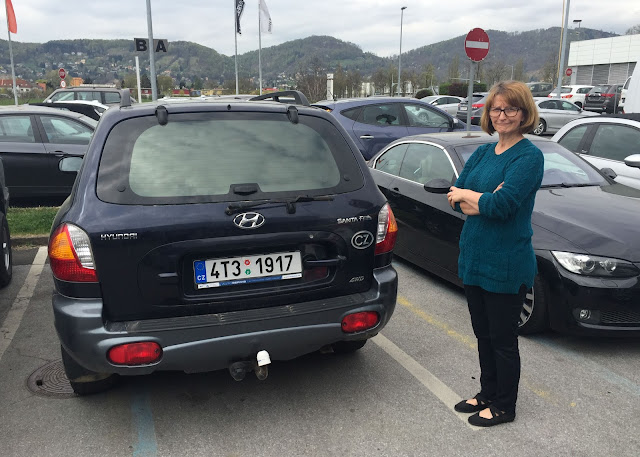 But by noon, the deal was done! Dave had persevered, as he is SO VERY GOOD AT, and we had a new/used car to drive away in. 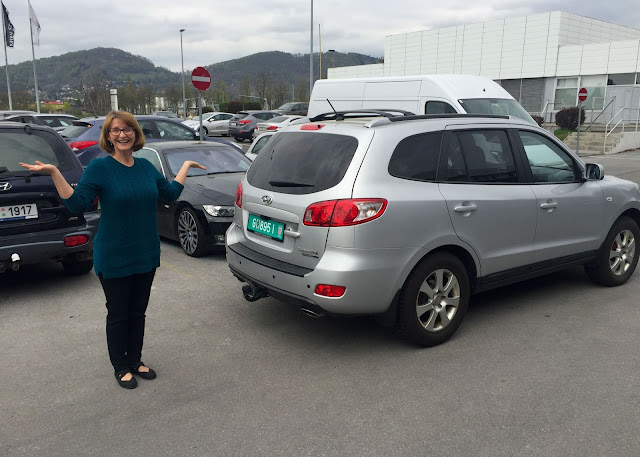 It's another Hyundai Santa Fe, a 2008 model. It had one owner who recently traded it in for a new one. Thankfully (and this may sound like a very funny thing to be thankful for!), while it sat on the lot it incurred two small scrapes. Because of that they actually took off $2400 from the asking price!

"You were lucky there was damage on this car - I gave you a really good price," the salesman told Dave.

All I can say is "Thank you Lord for taking care of us!" and "Thank you Dave for your hard work to see this whole process through!" 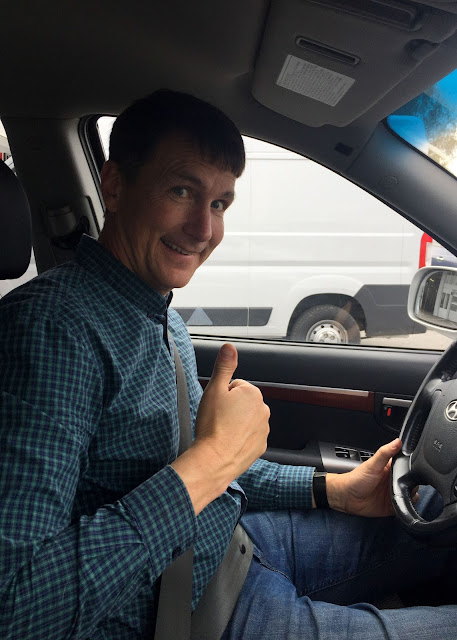 We left the dealership at noon, just when we were hoping to, and after we got out of the city, I got in to drive for my first time in my new car. Yes, I feel VERY thankful for it! 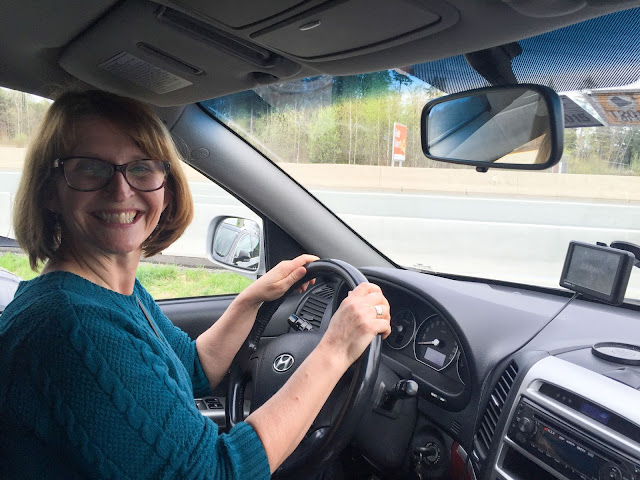 While I drove, Dave worked on his Powerpoint and talk for KPM, the leadership conference in Slovakia. Because we had to stop along the way to find wifi so he could email it to the team in charge of the evening program, we arrived into Zilina with FIFTY SEVEN MINUTES to spare, after all that happened in the previous 48 hours. 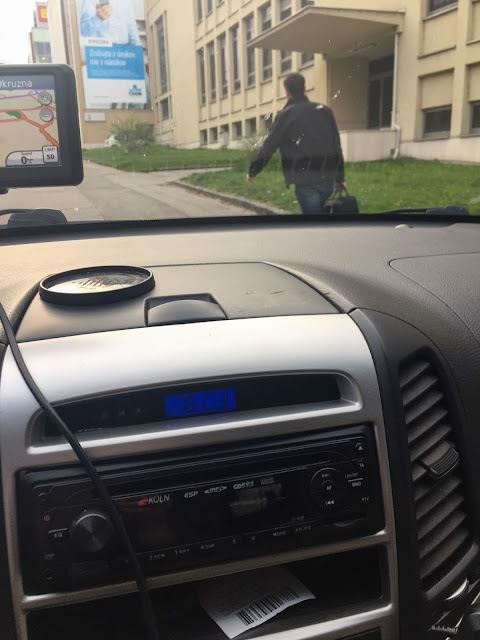 I dropped Dave off at the cultural house so he could go in to get ready and speak at 7.

In the meantime, I had to miss the evening program and drive the rest of the way home to Frydlant to drop off our dog and pick up clothes and things we needed for the week-end. I made it back here by 10 tonight.