In 2002, Bob MacRae, a professor from Moody Bible Institute came to visit us here in the Czech Republic.

Interested in putting together a spring break opportunity for his students who were youth ministry majors, he wondered if coming to see what JV was doing, and serving in some way for two weeks, would be an option.

Fast forward eleven years later, and here he is (towards the back of the photo, sitting on the right, behind Dave) with the ninth group of Moody students who have come over to Czech for spring break because of his initiative! 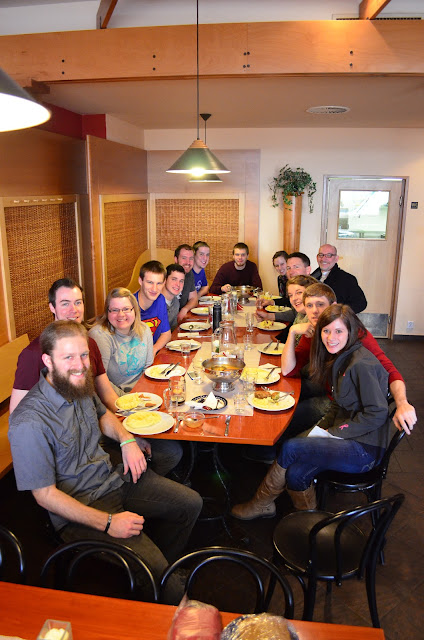 He brought the first group of students in 2005, and a new group has been coming every year since!

Bob and the ten students in this year's group, traveled around the Czech Republic these past two weeks, seeing what God is doing here as well as joining in at various youth events.

Before heading back to Prague to fly out, they ended their time here at Malenovice, where we joined them this morning so Dave could share the JV story, vision and mission. It was a treat to be with all of them!

In front, and on the left side of the picture are two former Moody students, who came out on one of these spring break trips a few years ago, and who are now serving with JV! Behind them is Martina, (hi Martina!), who serves on the English camp team here in Czech. She, along with Jon and Josh, have traveled with the Moody students these past two weeks.

One fun side note: When Bob came back in 2002, he happened to land on Tyler's 12th birthday. He joined in the party that day to celebrate, even though he'd just met us.

Who would've ever guessed that eleven years later, Tyler would be a youth ministry major at Moody, with Bob as his teacher and adviser?!
Posted by Unknown at 9:46 PM