Okay, this may have been one of the coolest things I've ever seen: the beginning of the biggest dog sled race in the lower 48 states that started here in Jackson! 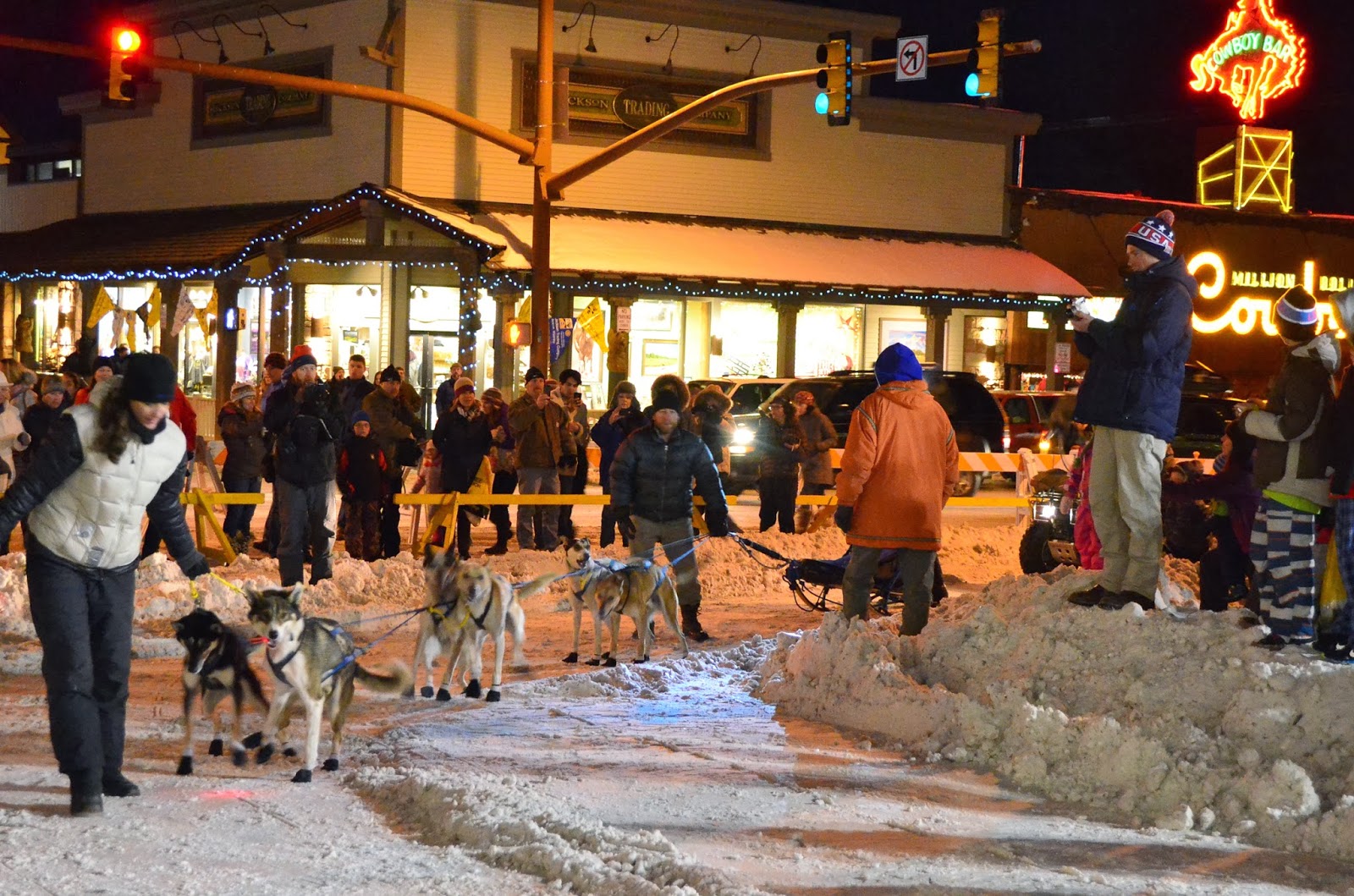 A week ago I saw signs on the streets that said Broadway, the main street through town, would be closed on January 31st. After checking around I found out it was because of the Wyoming Stage Stop Race, an international dog sled event.

Started in 1996, it's an eight day sled race across parts of Wyoming. 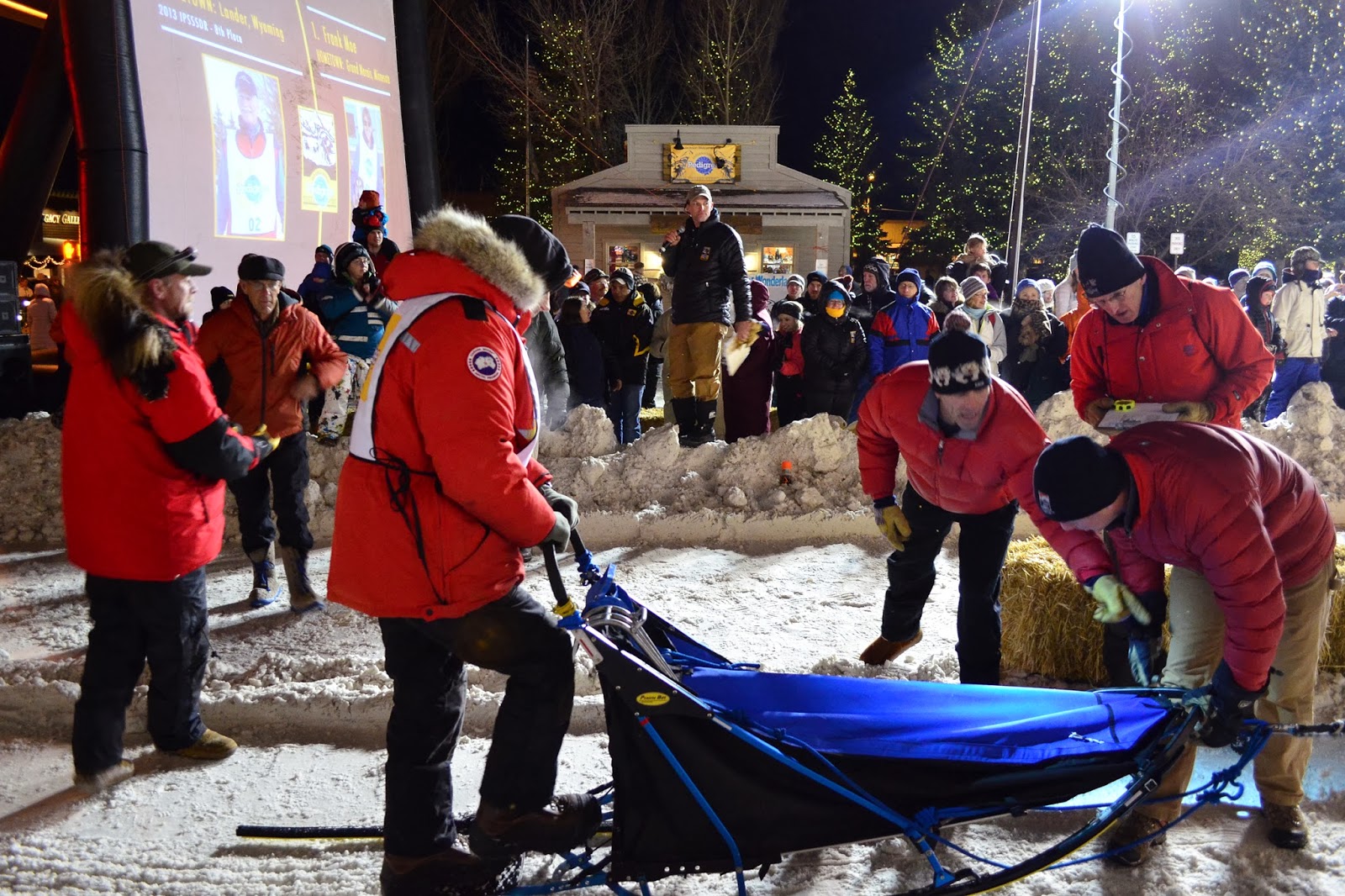 With seventeen teams competing, both from the US and Canada, the mushers and their dogs came through the streets of Jackson last night for the "ceremonial start" of the race (the real racing starts today). What a crowd there was, lining the streets to see and cheer for them!

And oh those dogs!!! If only I was so excited about running as they were! It was pure delight watching them bark and jump, and basically say "Hey, let's get this show on the road!" 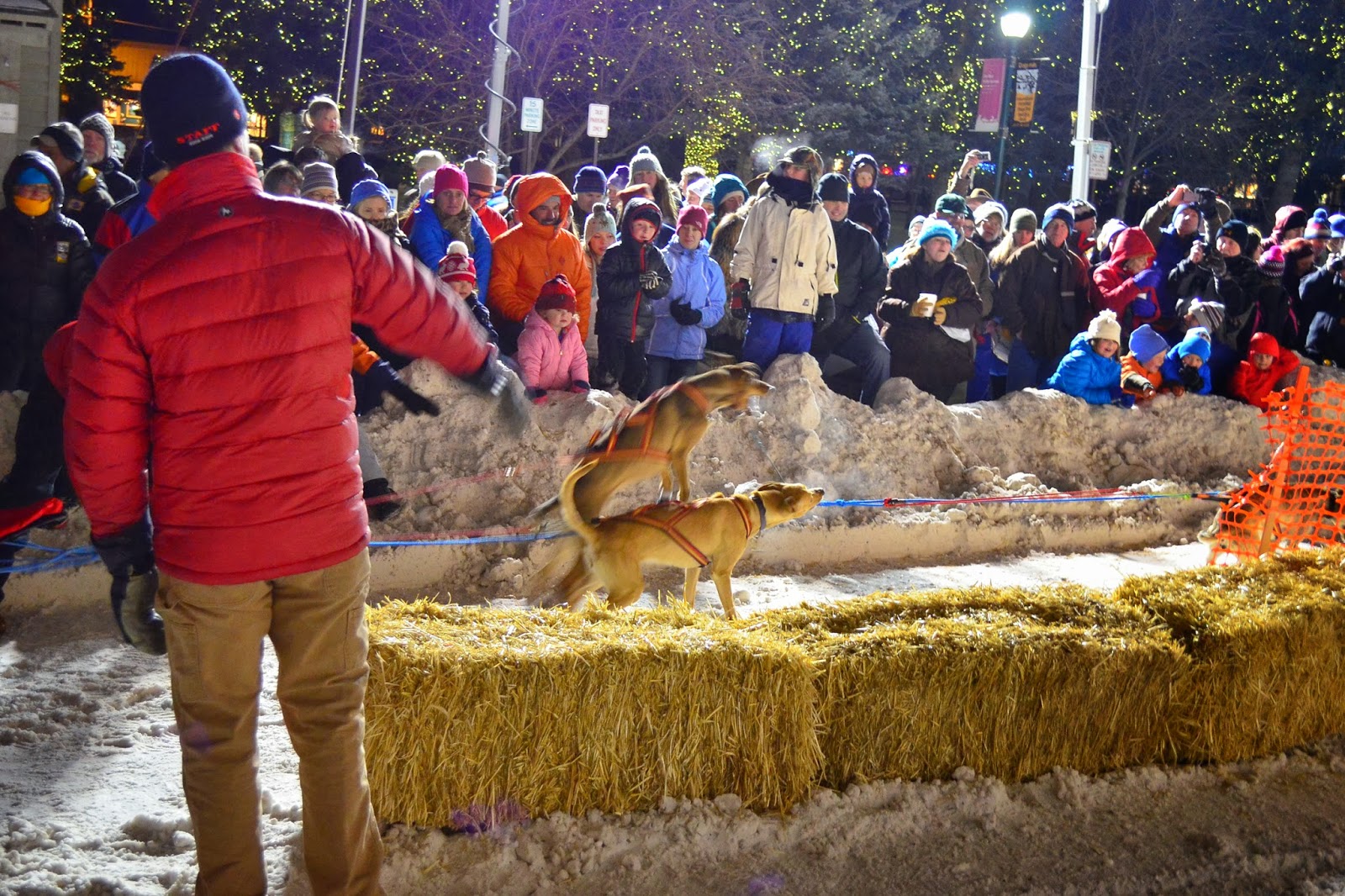 Two teams would come around the corner from the holding area in town, and line up for the beginning of the race - a relatively short trot for those dogs over to Snow King (the ski slope in town) in comparison to the fifty miles they'll travel with their mushers each day over the next week. 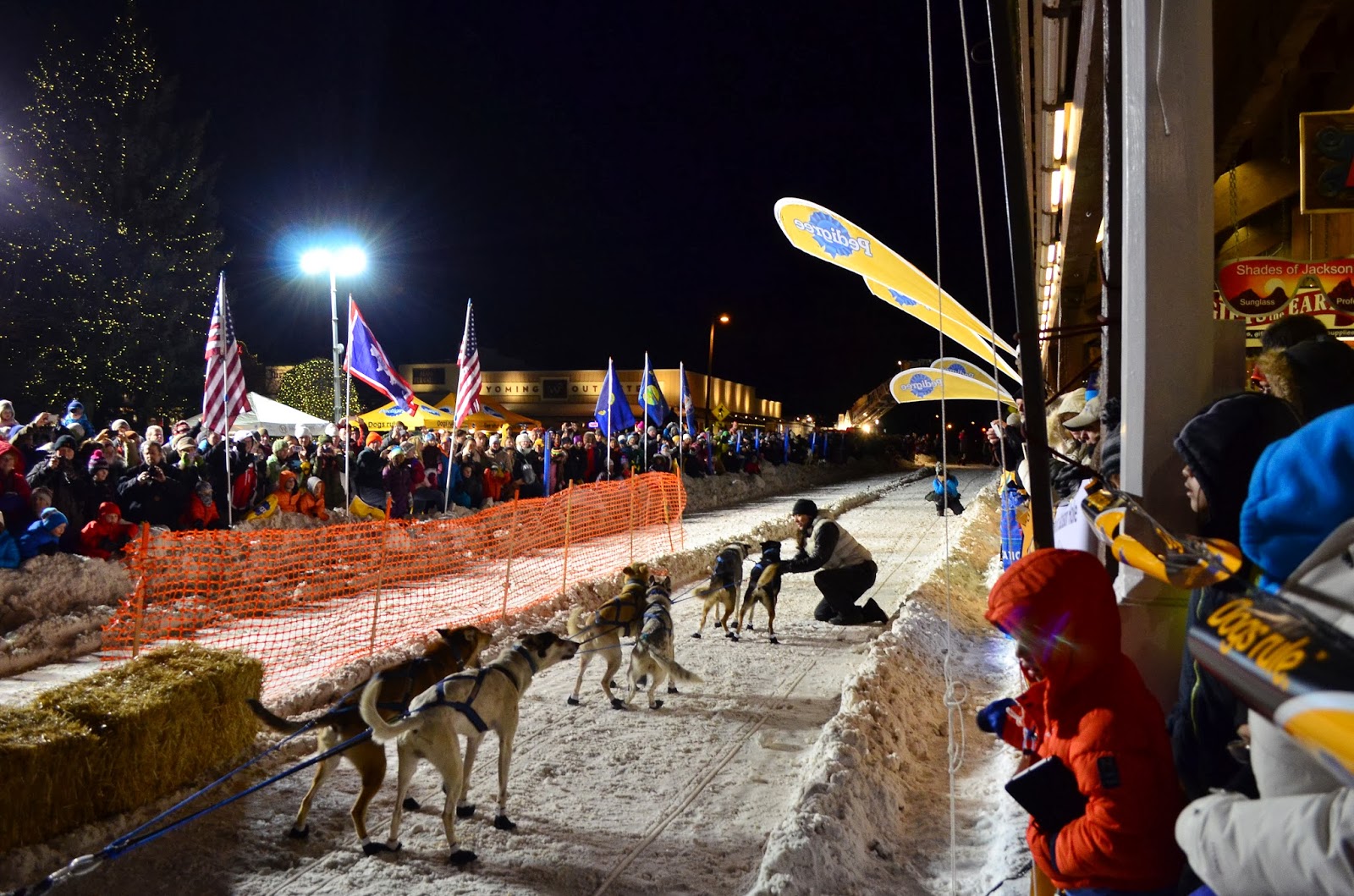 Just guessing at where to stand for the start of the race, Dave somehow led us to the exact spot where they started! I could see the mushers faces up close, and feel their excitement.

Imagine WANTING to be outside all day, on a sled, in the cold, mushing a team of dogs! That takes a very special person to do that. 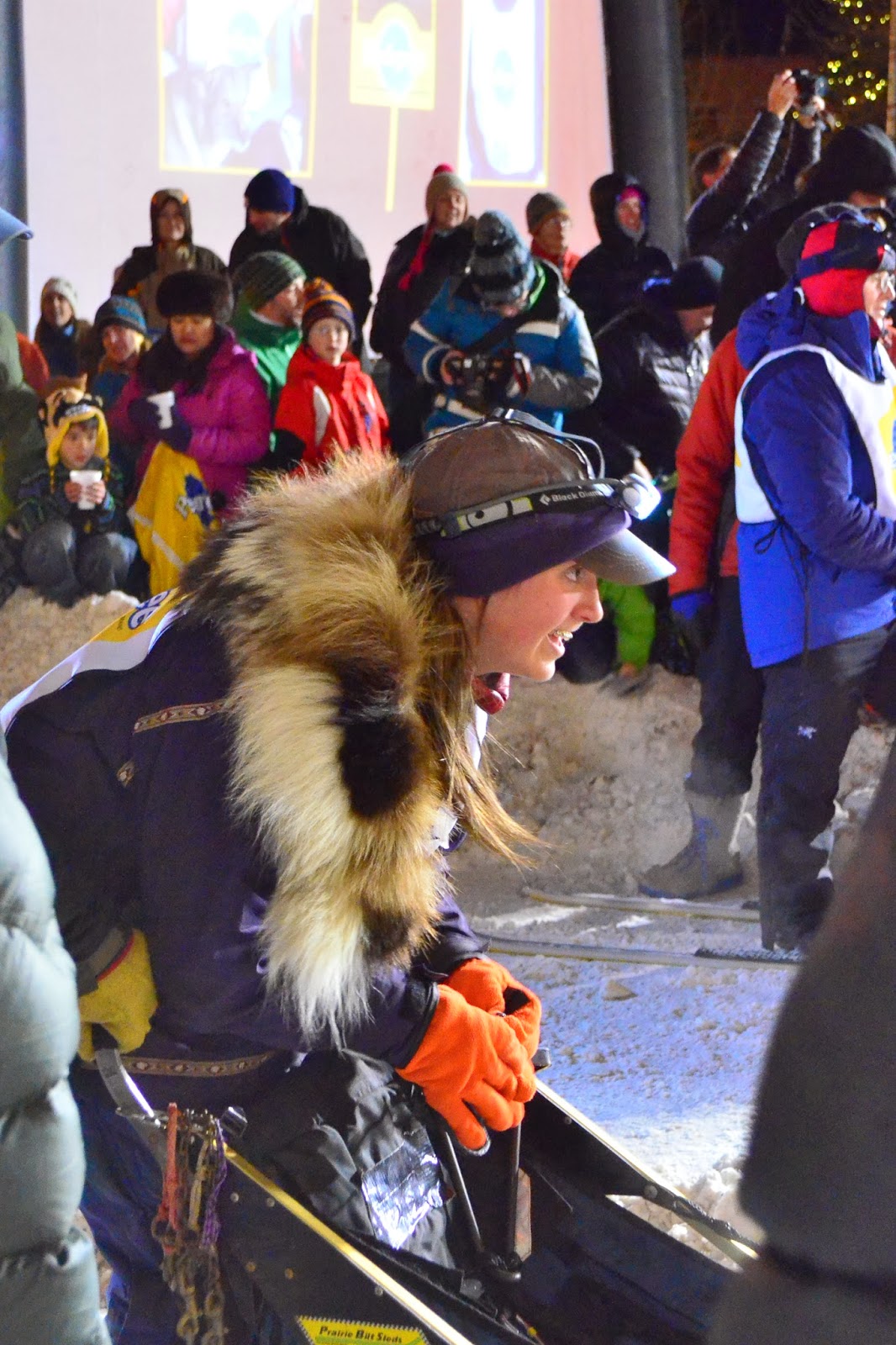 Notice this musher's "GoPro"? He's sure going to get some beautiful footage as he's mushing through the scenic winter wonderland of Wyoming! 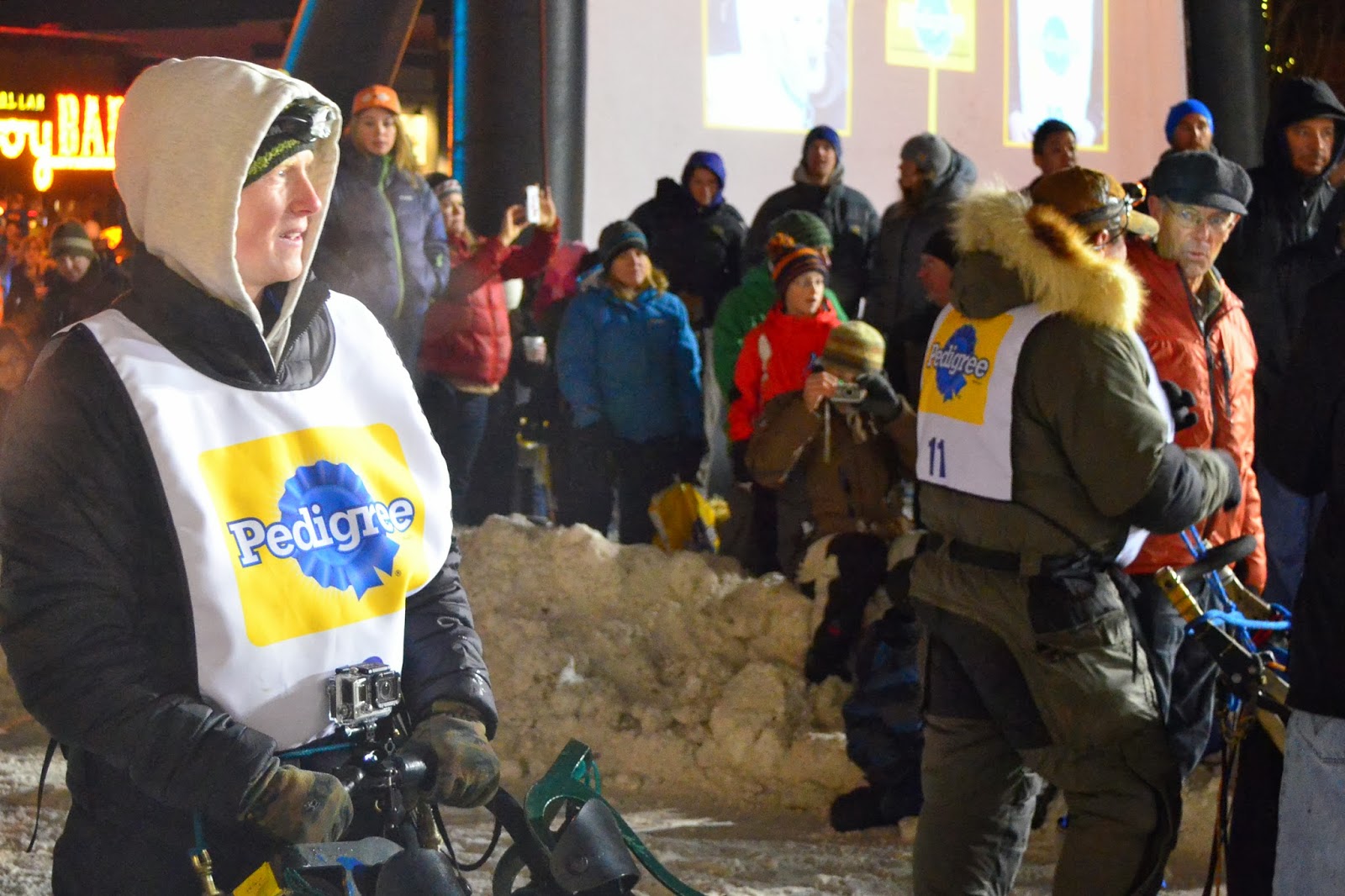 The real stars of the night were, of course, the dogs! Look at how excited this guy below is to get going? I can't tell you how fun it was, for this dog lover, to watch them all!

I read on the race website that in the nineteen years this race has been going, there have been 5496 dogs. That's a lot of dogs doing what they love! 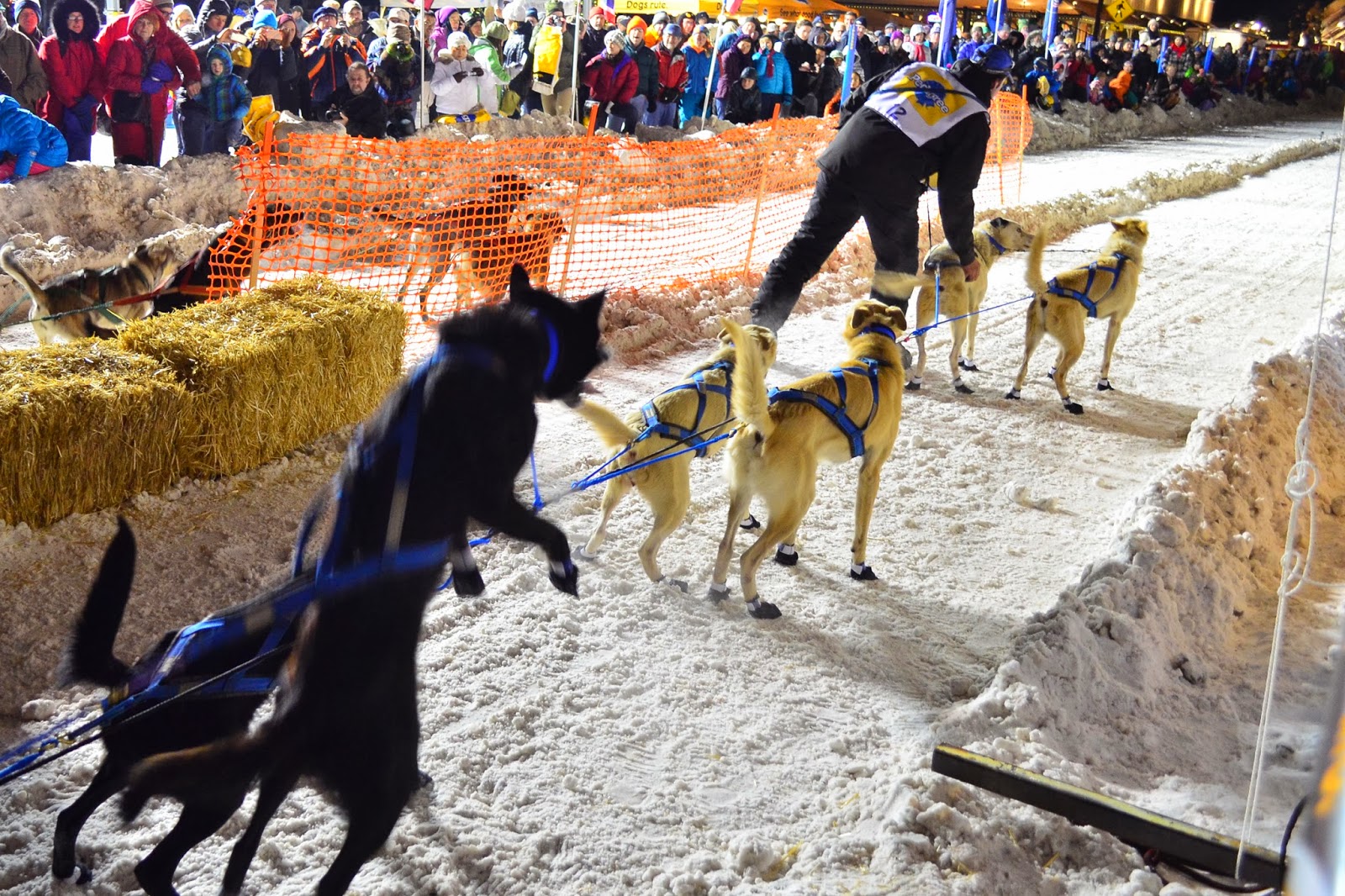 I also loved watching the mushers with their dogs, talking to them before they climbed on the sled to start the race. This musher in particular went to every one of his dogs, patting them and saying something...loved that! And they probably love him! 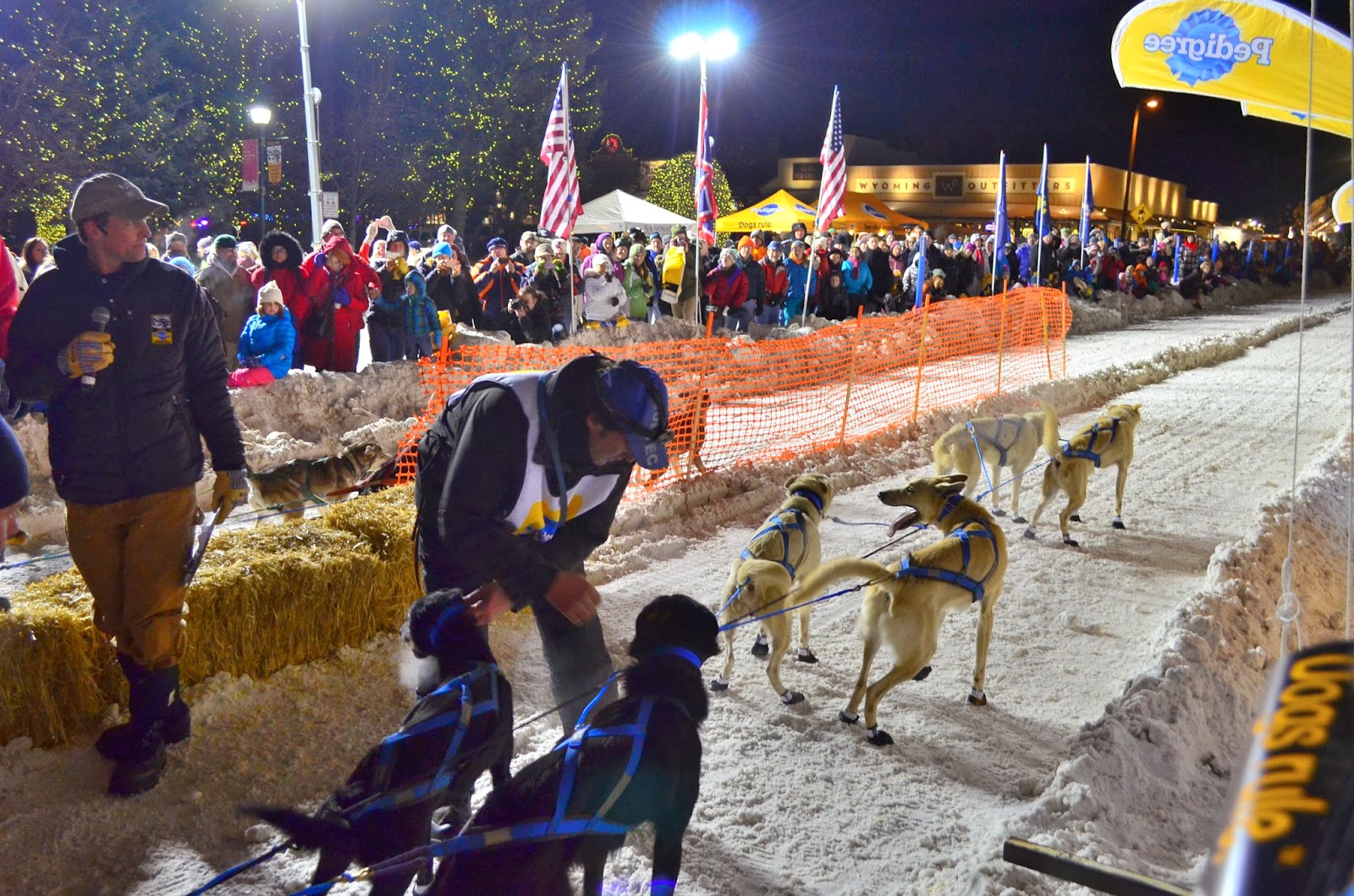 Though my fingers were completely numb, I just kept shooting photos. It was so exciting and exhilarating being there. Seeing the love and commitment of the mushers and their dogs was such an "other" kind of inspiration. It wouldn't be the way I would want to spend a week, but you just have to appreciate that they do! 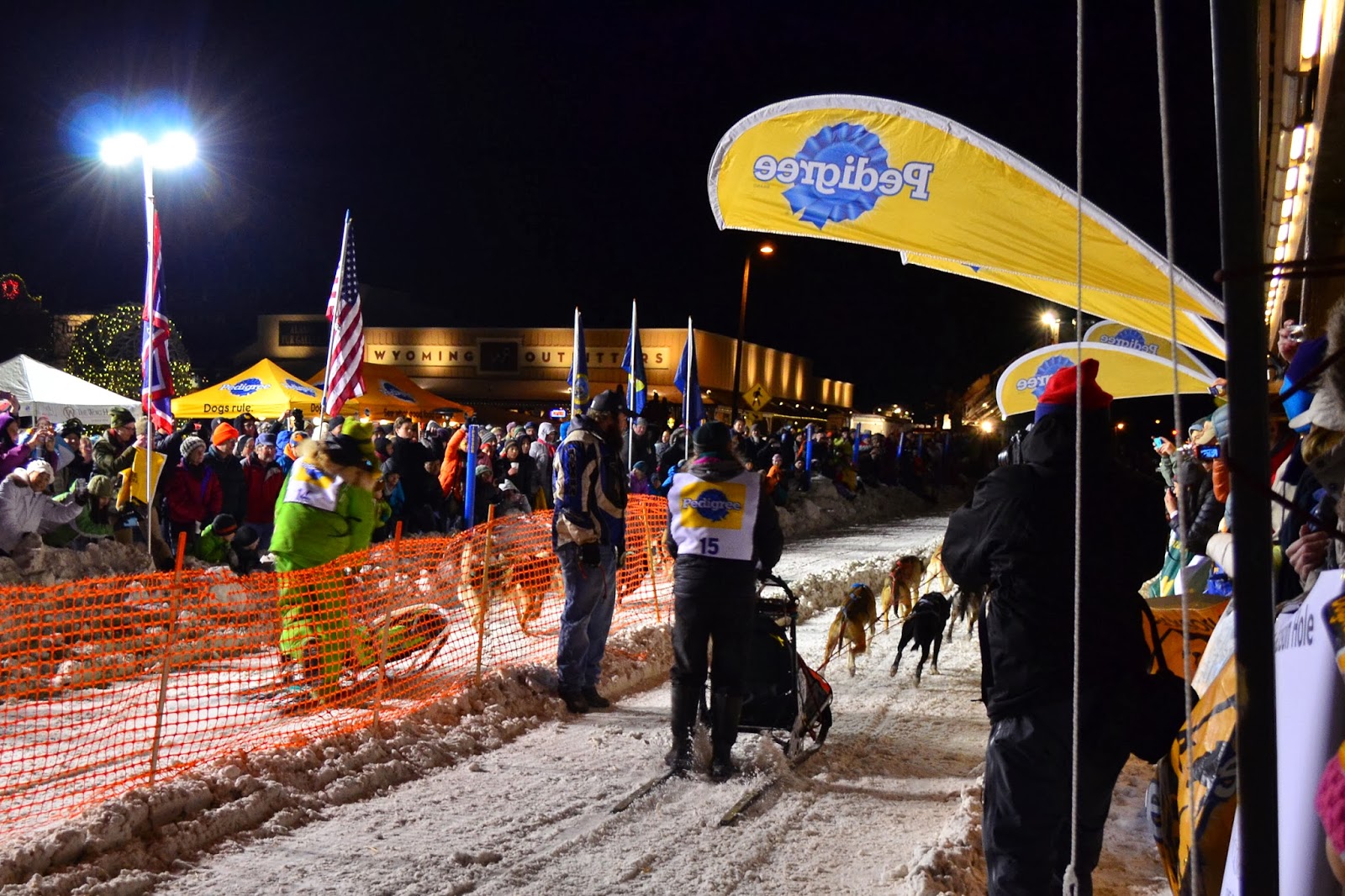 Last up was Aaron Peck, the 2013 winner of this race who comes from Canada. 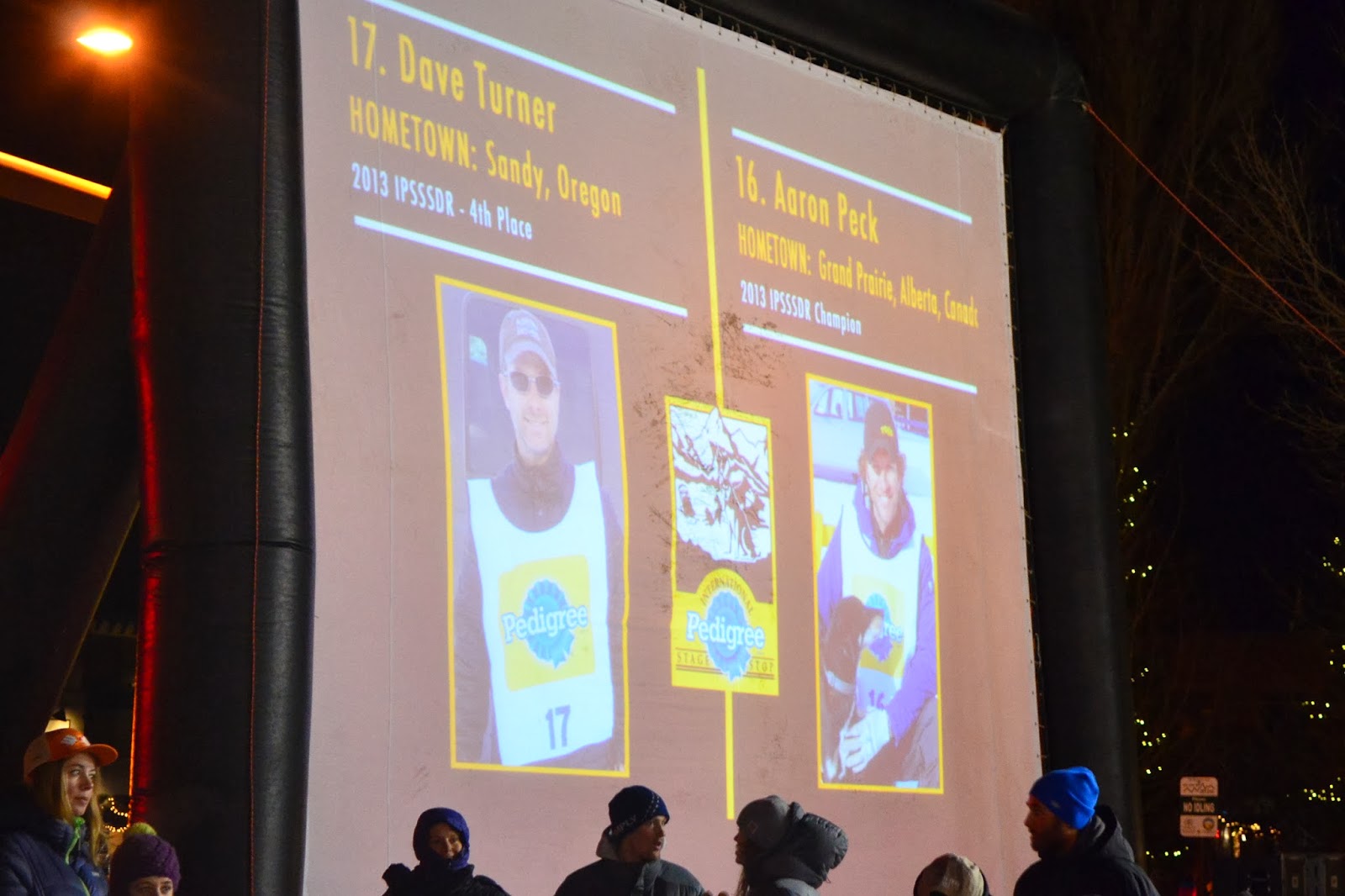 This guy just lit up the night with his contagious love for his dogs (as seen below), his smile and his warm words to the people of Jackson saying how much he loved it there. From the bio that I read about him online, it looks like he is also a believer and mushes to the glory of God. Very cool! 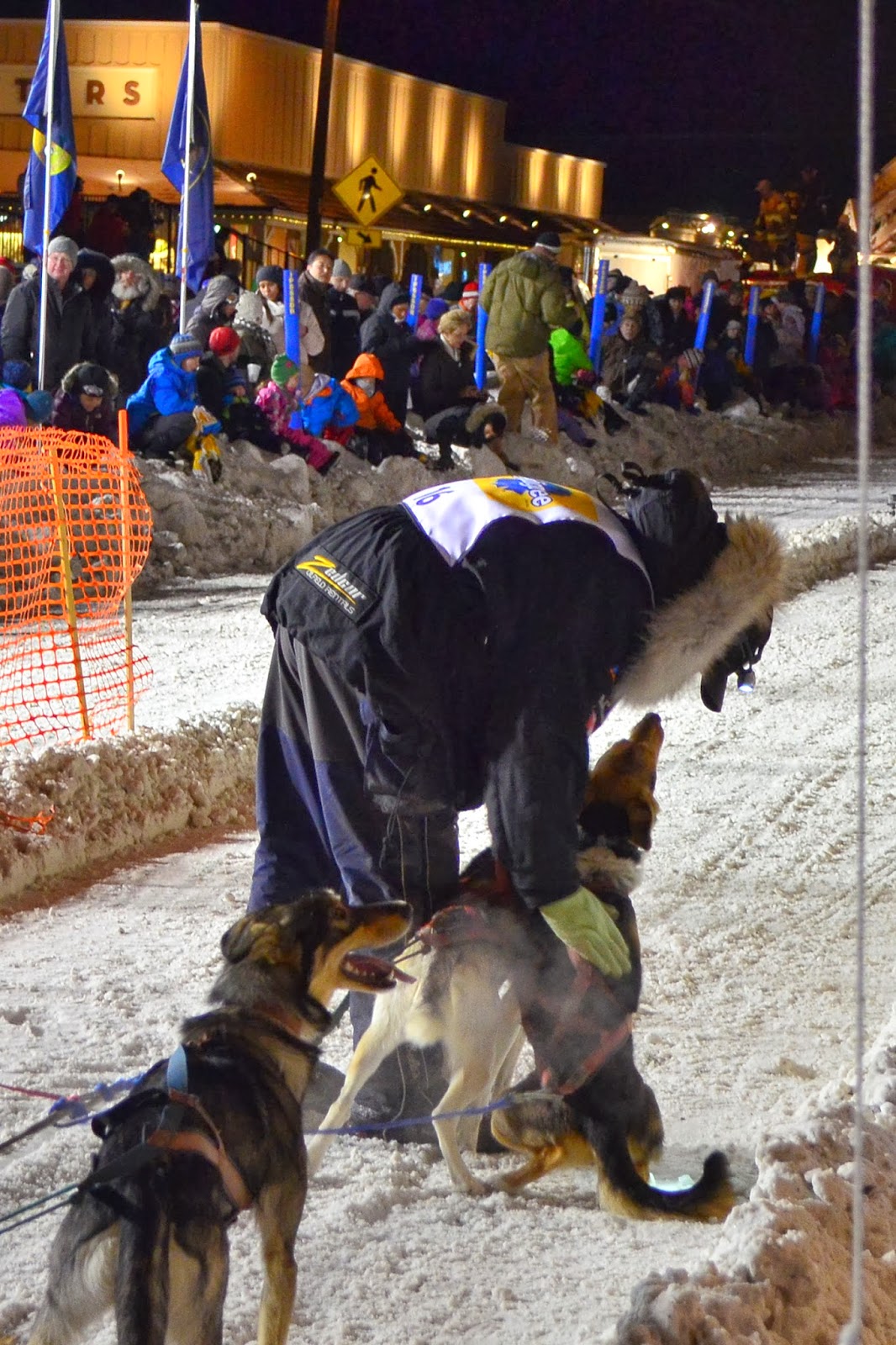 Oh yes, and the evening wouldn't be complete without an appearance by Miss Wyoming! A petroleum engineer (!), she was delightful to watch as they interviewed her and she interacted with the mushers and their teams. 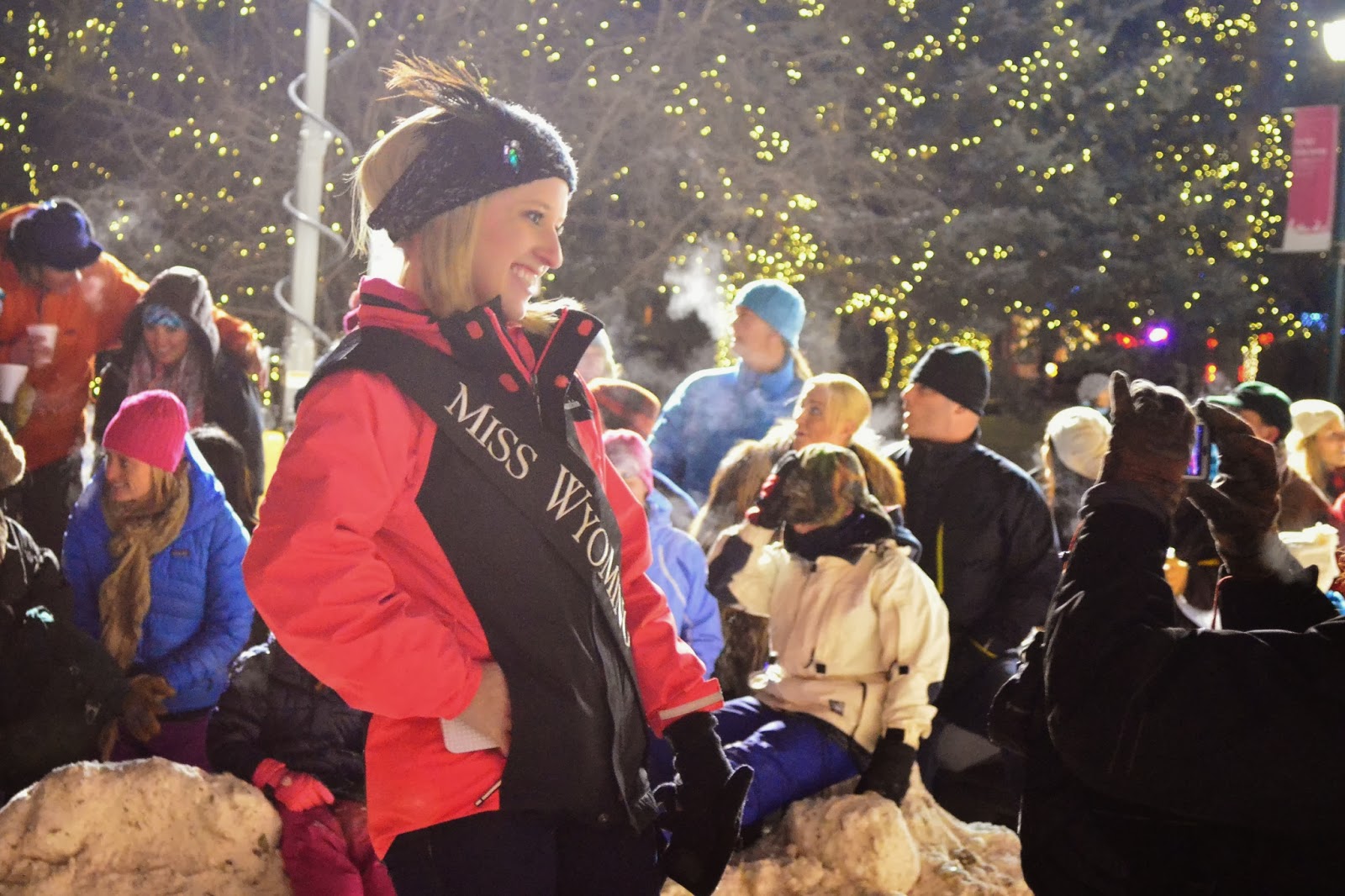 So it was sure a special night in Jackson! Very meaningful to experience something we've never seen before. I'll truly never forget it. 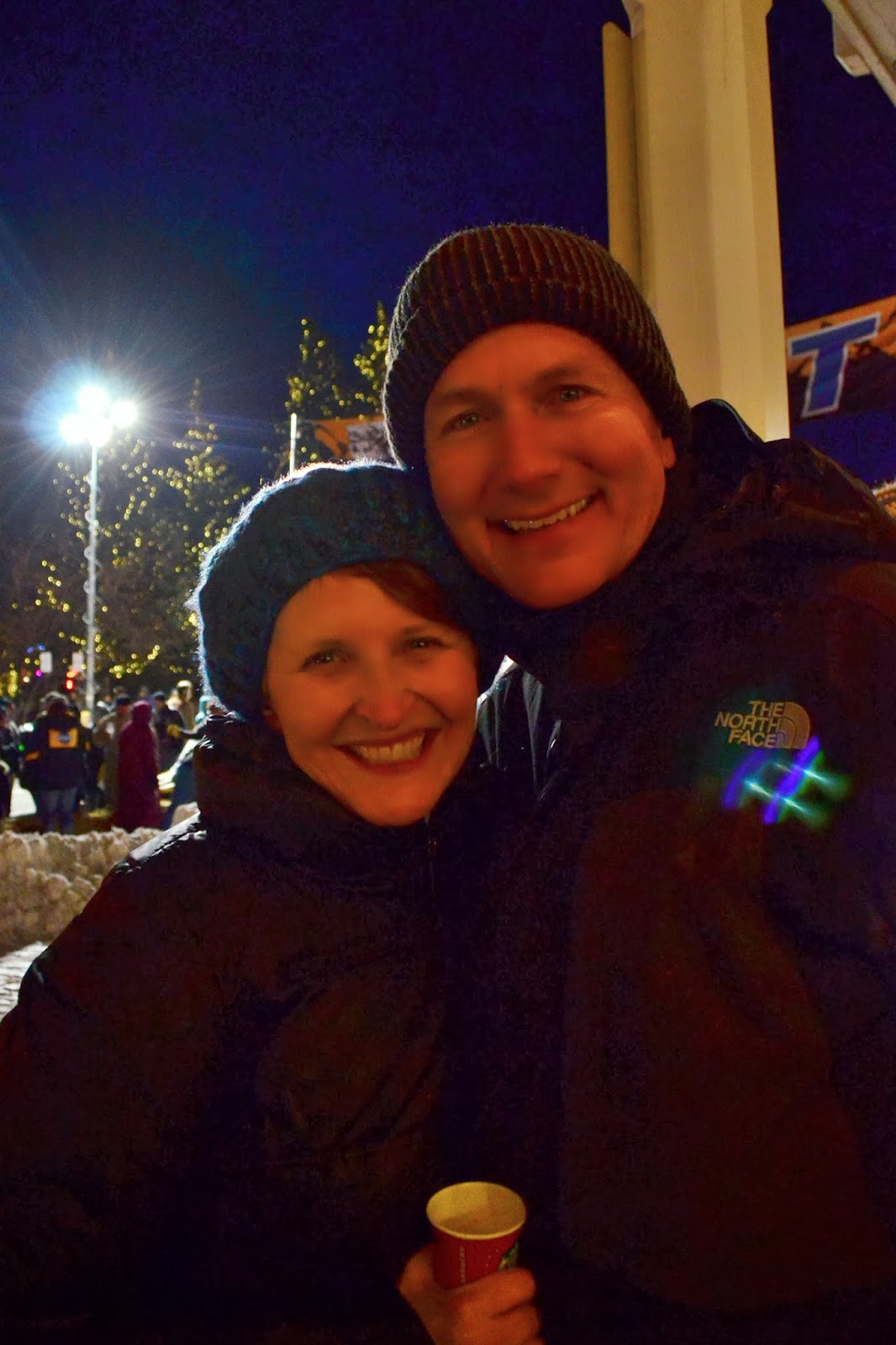