My Cooking Philosophy...and a recipe 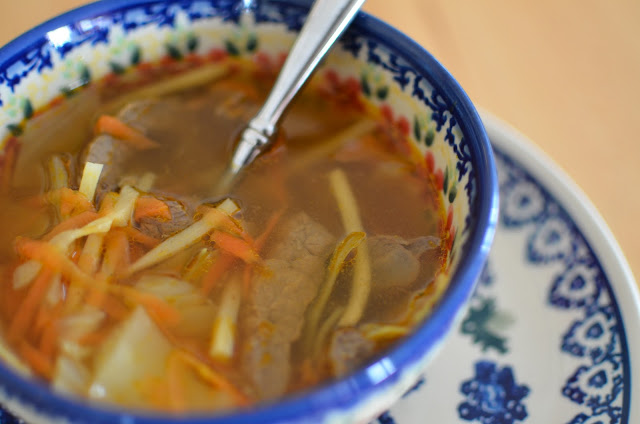 Truth be told, I don't like to spend a lot of time cooking. I like making nutritious and tasty meals for my family. But only if it takes about 30 minutes...maybe 40, but no more than that! So in general, if I can't make dinner in less than 40 minutes, it's not a recipe for me.

A few days ago I printed off a recipe for soup that looked like it'd be a quick one. And the ingredients were things I had on hand, except for the beef which was easy to pick up at the store.

Yesterday, when we got home from the salt caves (yes, tried another round of it, and I like how I'm feeling during and after a session there!), I started in on the soup.

Twenty minutes later we were sitting down to eat it. Seriously, from start to finish it was that quick. When I'd looked at the instructions it looked like it wouldn't take long, but I didn't realize it'd be that fast.

After enjoying dinner, I was back in the kitchen and happened to glance at the recipe that I'd been following to make the soup. I am not kidding when I tell you it was only then that I noticed the title of the recipe:

That just made me laugh at myself! How had I missed that important point in the title?! But I also thought, "If only all recipes told you in the title how long it would take to make!"

So from Chef Meg at SparkPeople, here's a 15-20 minute soup (with my adaptations):

1 tablespoon soy sauce, reduced sodium (I use a gluten free soy sauce I get here at Albert)

2 teaspoons fresh ginger, grated (one of the key ingredients!)

6 ounces shiitake mushrooms, tops only, stems removed, sliced, about 1 1/2 cups (didn't have any of these so omitted them)

1 teaspoon sriracha sauce (a Thai hot sauce, another key ingredient...for those who live here in Czech you can get it at Billa)

1/4 cup cilantro leaves, chopped (Billa was out of cilantro so omitted that as well)

3 green onions, chopped (forgot to get it so went without this as well!)

DIRECTIONS
Bring the stock to a boil in a large saucepan or stock pot.
Place the beef, soy sauce, and ginger in a glass dish, mix to combine, and let marinate for five minutes.
Add the beef and sauce to the boiling stock, and reduce heat to medium-high. Cook for two minutes, then add the carrots, cabbage, and mushrooms and cook another two minutes before adding the sesame oil, sriracha, and bean sprouts and cooking for final two minutes.
Remove from heat and garnish with cilantro and green onions.