This is definitely not one of my best photos.

But it's got a great story to go along with it! 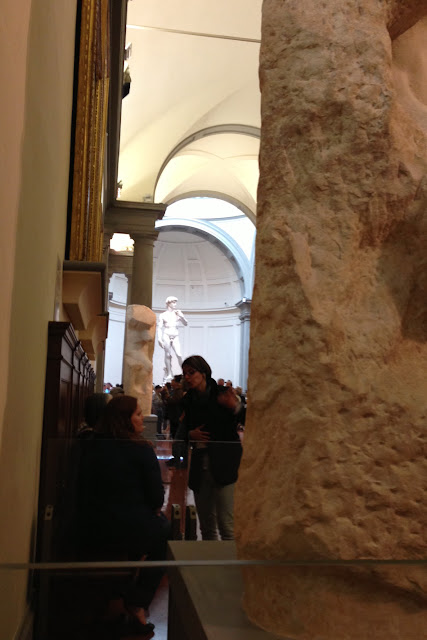 On Tuesday we were in Florence to see the sites with the group we've been traveling with.

Our first stop was the Accademia Gallery to see Michelangelo's "David" statue. I've seen it before, but was still excited because we had a great guide who was full of interesting stories, not just facts about it.

Before we went up for a close look, she had us sit down on benches while she spoke. I took the above photo with my iPhone just for memory's sake...a glimpse of "David", behind one of Michelangelo's unfinished statues.

I saw the guide (the one standing in the above photo) obviously in the middle of explaining something to the women in front of her, and actually thought "I hope I don't get in trouble for taking a photo with my phone!", since she looked right at me the second after I took it! (Shhh...not supposed to take pictures in there!)

A few moments later we walked around to the other side, headed towards "David" and as we walked, I glanced to the left and saw... 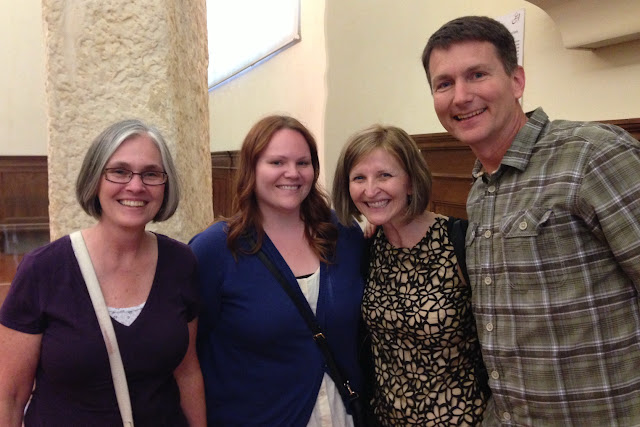 Two friends of ours from Vancouver, Washington!!!!!!!

They were the very women the guide was speaking to in the picture above!! I had absolutely NO idea it was them when I snapped that quick photo moments earlier!

Eileen had actually written to me last week to say that her daughter, Megan, had won a trip through the travel agency she works with and that they'd be in Italy at the very same time as we would.

From the dates she gave me, I knew there was a slight chance we'd be in Florence on the same day. But because our group's schedule was planned by someone other than us, I couldn't give any times or places of when or where we could meet, so told her I'd just keep my eye out for them.

I really COULD NOT believe it that we actually saw each other!!!!

We had less than five minutes together, but it was oh so sweet to have crossed paths.

In Florence, Italy of all places!!!