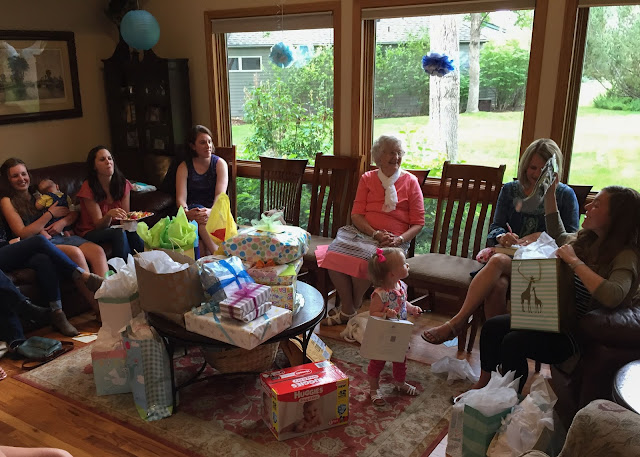 I know, it doesn't look like it's 10 PM in that picture. But that's because while it was 10 PM here in Czech, it was 2 PM where they were all gathered.

I am on the other side of the ocean from Colorado, where this gathering took place, and happily was able to FaceTime in to this precious shower of love for our daughter-in-law, Haley, who is expecting hers and Caleb's first son later this month. 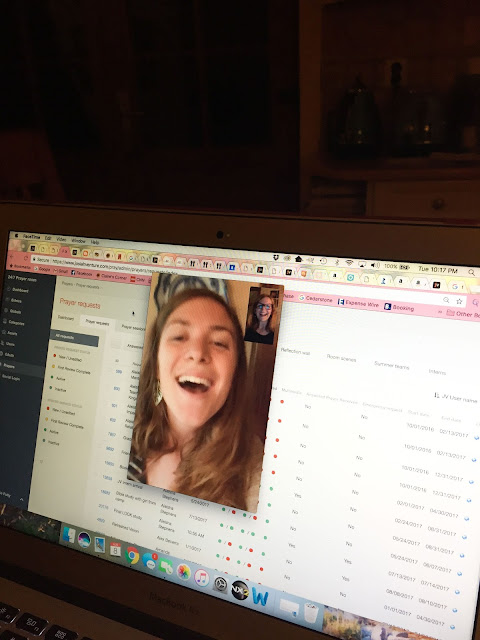 Through the beauty of technology, I was "there" for the whole shower, enjoying people, presents and the words of love that were poured out over Haley and baby boy.

Haley's mom, Amy (who serves with Josiah Venture in Slovakia with her husband), is in the States right now so was able to put together this blessed event, along with Haley's sister, Ally who came from Seattle. Many from their years of life in Fort Collins came to be there. What a beautiful outpouring of love from all of them!

Amy began the shower by sharing a devotion from her heart and God's word, so full of love and emotion that I was choked up even though I was sitting in my kitchen, all the way across the ocean.

And then, two of this precious little boy's great grandma's (he actually has FOUR, if you can believe it) who were able to be there for the shower, prayed for him. I couldn't hold back the tears after that. 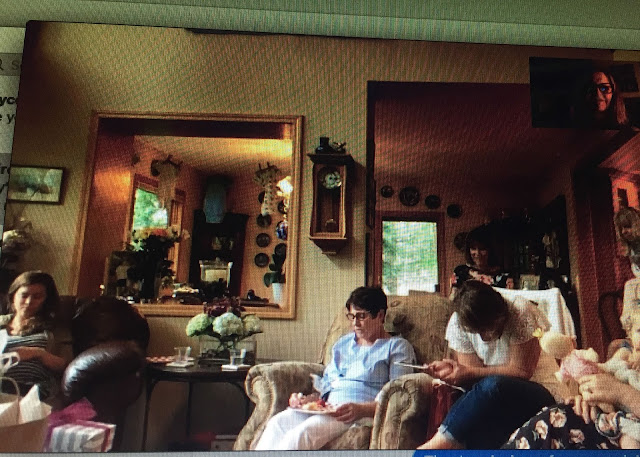 What a blessed spiritual heritage this little guy has, with godly parents, grandparents, and great-grandparents! 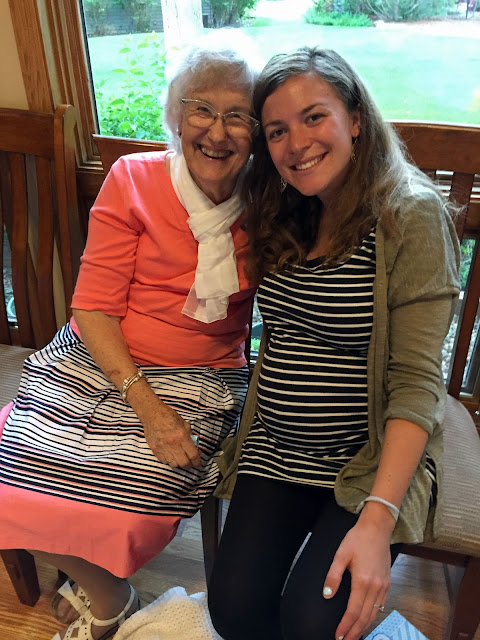 That's Dave's mom, who lives in Denver. She and my sister-in-law, Joyce, were able to drive to Fort Collins for the shower. While someone (thanks Lorna!) held a phone so I could FaceTime in, Joyce was lovingly capturing photos of the event and sending them to me as it was happening.

I can't even begin to express how much that meant to me. Truly, it was the next best thing to being there! 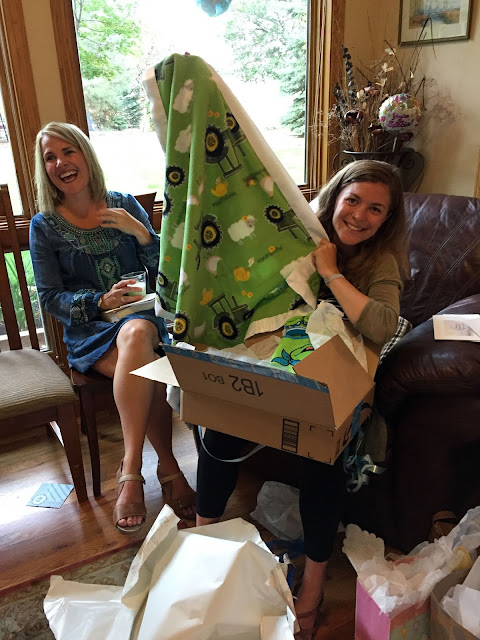 I got to watch Haley open beautiful gifts, like the blanket that Nana Patty made for him (do you see the tractors? A sweet nod to Great-Grandpa Patty's farmer roots!), and watch Haley open gifts that I sent (thanks to Amazon!). 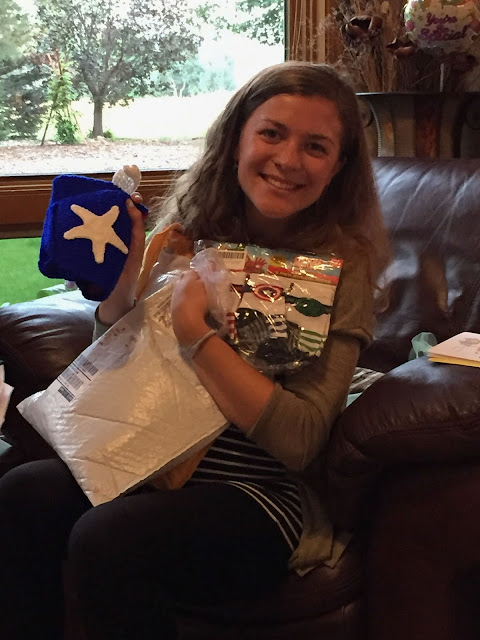 You may be wondering what it is that I sent for baby boy (who, by the way, only has a name known to his mommy and daddy right now! They're waiting for his birth to tell the world who he is).

I quick sent a photo so that Haley could see exactly what it was. How cool is this, that she and I could talk during the shower?! 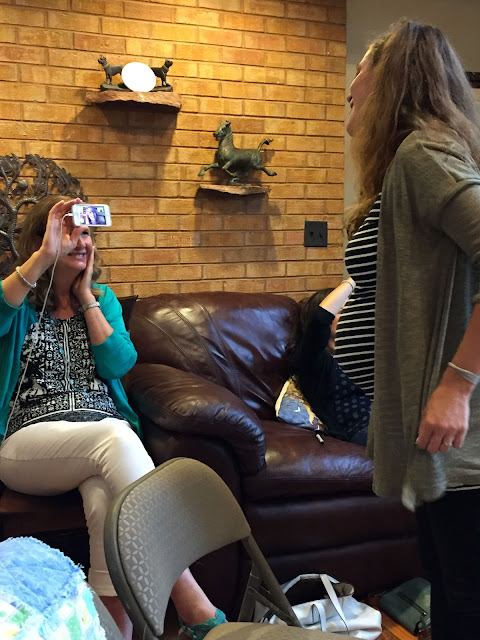 I'm not sure how it started, but when Caleb was growing up, he and a number of his missionary-kid friends here took on Marvel super hero personalities as their own. Caleb's was Captain America, which not only stuck all the way through high school, but even made an appearance at his bachelor party three years ago. (See a video HERE of that event, culminating on his wedding day, that still makes me cry happy tears!) 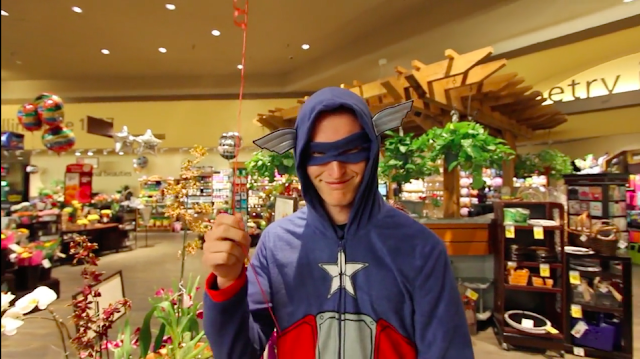 So OF COURSE I had to get little boy Patty his own Captain America super hero costume for a photo shoot when he arrives! 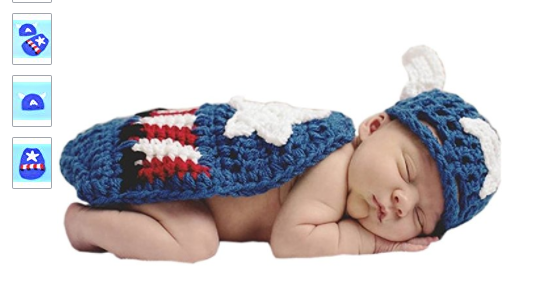 Stay tuned for those pictures!

It was two hours of bliss, being able to "be there" for the shower. This little boy is already well-loved by many, including these two beautiful great-grandmas! 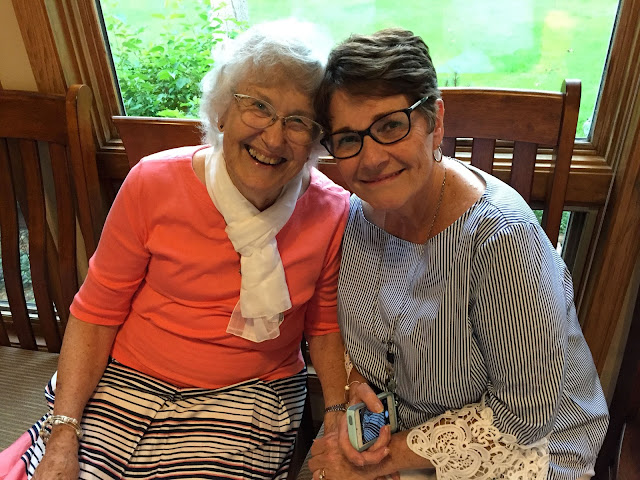 So now, baby boy Patty has been showered with love, and can come anytime soon! His due date is August 27th, which we're all anticipating with much excitement!!
Posted by Living By Lysa at 2:51 PM