Only one lonely little photo to tell a story.

But what a story it is. 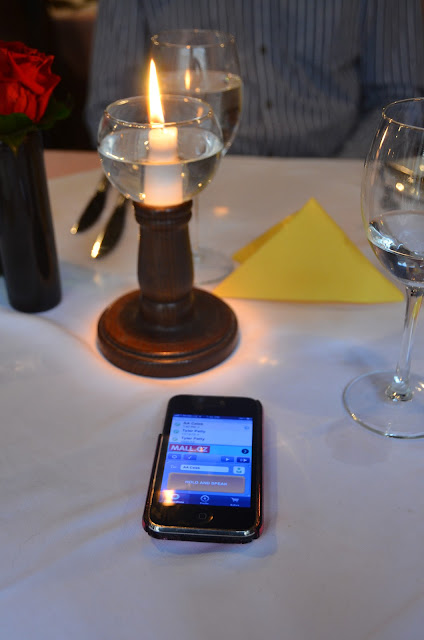 While Dave and I were in Prague, we were in contact with Caleb.

I haven't said anything about it for the past two weeks, but the pain in his stomach had returned, along with some other symptoms he'd never had before.

On Wednesday he got in touch with his doctor in Cleveland after an especially difficult day of pain. He recommended Caleb get to Cleveland as soon as possible. Within hours, he had an appointment for two days later.

Thanks to Dave's miles (definitely the upside of him traveling a lot this year), we were able to get him a one way ticket to Cleveland Friday morning so he'd make his 11:30 appointment.

All went smoothly on the flight, and he navigated his way through the Cleveland public transportation system and was even at his appointment a half hour early.

The picture above was taken as I was on "Hey Tell" (an awesome app for the iPhone that let us stay in touch - it's voice messaging) with him while Dave and I were having lunch at a cafe in Prague. He was just getting on the airplane at 7 AM his time, 2 PM our time. All was well.

We were on Hey Tell a lot throughout the day, getting updates as he met with his doctor and got the news that he wanted to give another steroid epidural to ease the pain, like he got at the beginning of September. We heard from Caleb just as he was heading in to get it, amazed at the gift of internet and phones that allowed us to be in contact through all of this.

Caleb sent another Hey Tell after it was all over and was out of recovery. The shot took effect almost immediately, and his doctor actually thinks this one might last up to six months this time. We are still hoping and praying that the damaged nerves will heal while the medication is in effect.

We were able to actually talk with Caleb as he was on the bus heading back to downtown Cleveland to catch the "Megabus" home to Chicago (all the flights on "miles" were full that day so we opted to send him back by bus). It was very relieving to hear the cheeriness in his voice again after a few weeks of hearing pain instead, and we hung up with a huge sigh of relief.

Considering all the pieces of his day...from waking up at 4 AM and catching a flight from Chicago, to being on the bus heading back downtown and about ready to head home to Chicago, all in one day...we were very encouraged.

All day I'd been checking email and Hey Tell just to stay in touch with him. But for the next hour, Dave and I were talking and I didn't look at it.

Until it was too late.

Hey mom, I am writing from some random guy in starbucks. My phone (with my wallet, debit card, health insurance card, CTA pass and drivers license) just got stolen. I just called Chase to cancel my account, and am trying to track my phone using the app FindMyiPhone. I don't know what to do. My bus leaves in 45 minutes, so I don't know if I should stay here and figure it out with the police or leave. I don't know what I would do if I didn't take this bus because I don't have any numbers or anywhere to stay. Praying! Trusting God and his sovereignty.

I can hardly describe the jolt of electricity that went through my body as I read that message at midnight in Prague.

For the next ten minutes while we thought he might still be online, I sent a flurry of emails: instructions from dad on what to do, phone numbers he could call, the name of someone I'd been in contact with in Cleveland where he could stay, encouragement, prayers...

And we heard nothing in return.

This definitely ranks up there as one of the most intense testings of my faith. To not know where one of our children was for seven hours, and yet still trust the Lord and actually go to sleep...this was a huge victory for me!

We called Tyler to let him know what was going on, and asked if he could borrow a car to go meet the Megabus when it came into Chicago at 11 PM. He said he would do all he could to make that happen.

Without setting an alarm, I woke up at 6 AM Prague time and started texting Tyler to see if there was any news.

He, Lara and Haley, Caleb's girlfriend, were all in a borrowed van, driving the streets of Chicago looking for him. They'd missed the arrival by just two minutes, but he was no where to be found after that so they were driving along routes they thought he'd walk back to Moody. But still, no sign of him.

Finally, at 7 AM I got a text from Tyler:

I woke up Dave to tell him the news, and then we got on Skype.

And got the rest of the story.

Which I'll finish tomorrow as there's still so much to tell.
Posted by Unknown at 8:12 PM