On this wintry last day of February, with Siberian type temps of -12C (10F), we've got a bit of "Family Circus" going on at our house today. 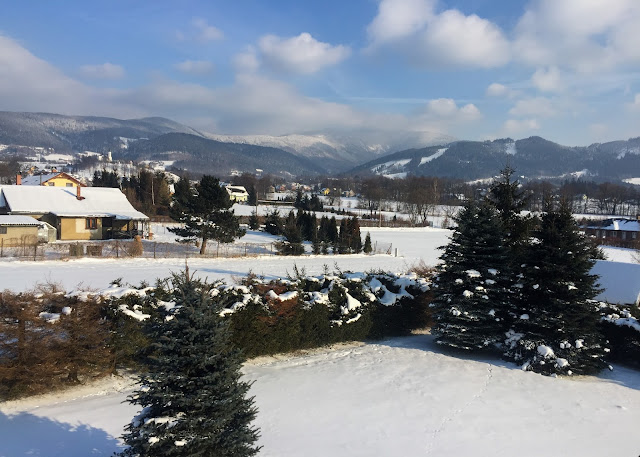 Growing up in the States, reading the comics in the newspaper was a regular occurrence at my house every day of the week. But especially on Sundays! It was always in color, was usually four pages, and had longer strips for some of the most beloved comics.

And one of those was a comic strip called "Family Circus", which featured, as you can imagine, a family: a dad, mom, three little kids, grandparents, two dogs and one cat. It's been going since 1960, and the kids have never grown up, nor have the parents aged!

But what got me thinking about that comic strip today was having Judah and Asher over for the day while Lara was at a KAM ladies retreat day at Malenovice. Tyler brought the boys over this morning and all three of them spent the day here. 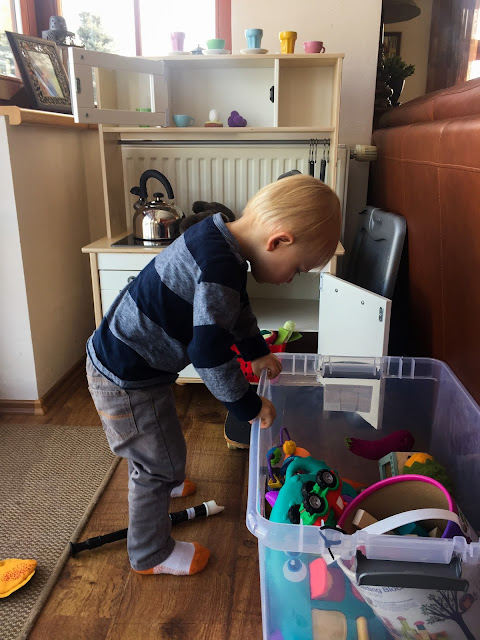 My favorite strips of Family Circus were always the ones showing Billy, the oldest boy, as he made his way from one place to another...with a lot of stops in between!

Billy reminds of Judah whenever I have him at our house! His delightful sense of curiosity and wonder leads him up and down, over and under, here and there and everywhere as he spends a day at Nonnie's house. 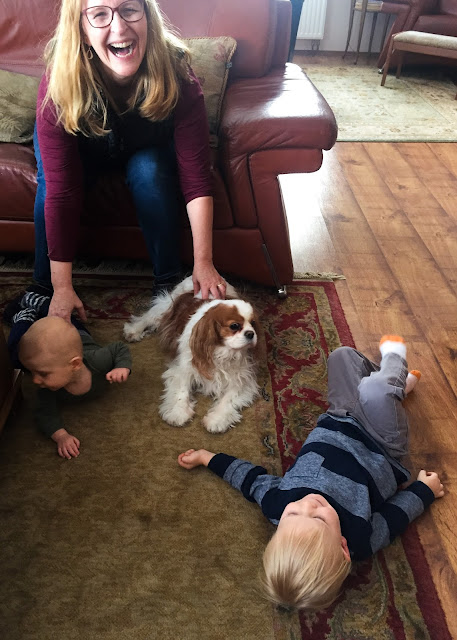 He goes inquisitively from one place to the next, exploring, chattering, asking questions, and figuring things out all along the way.

There is no way that I could capture everything he does in one day. For one thing, I wouldn't be interacting with him if I was just taking pictures every minute. And second, I'd be taking a thousand pictures (or more) to capture the change that comes every minute or two with this little guy!

But today, since both Tyler and Claire were here all day too (so could keep Asher) I wanted to at least capture a little bit of his two year old energetic self. So the following is in order, over the course of the day...and only a fragment of what actually took place! 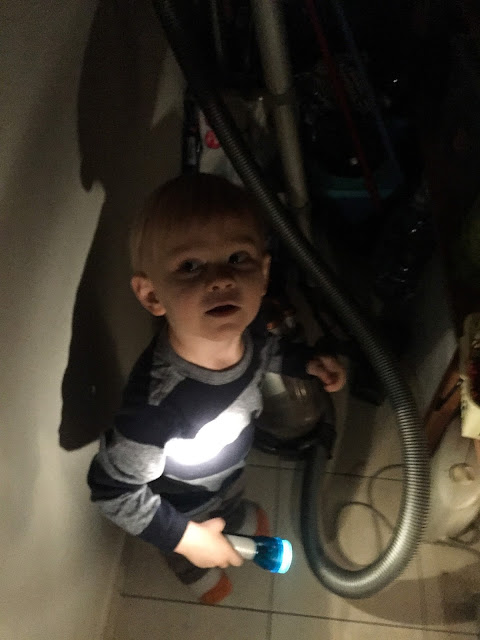 One of the things Judah discovered early on in our "toy box" was a bunch of old flashlights that belonged to Caleb many years ago. I'm glad I kept them because they're a fun assortment that Judah has repurposed for all sorts of happy activity.

But none of them had batteries! So today Nonnie found batteries for several of them and we spent a good amount of time going to places in the house that could be explored, in the dark, with a working flashlight, like a storage room and Papa's closet! 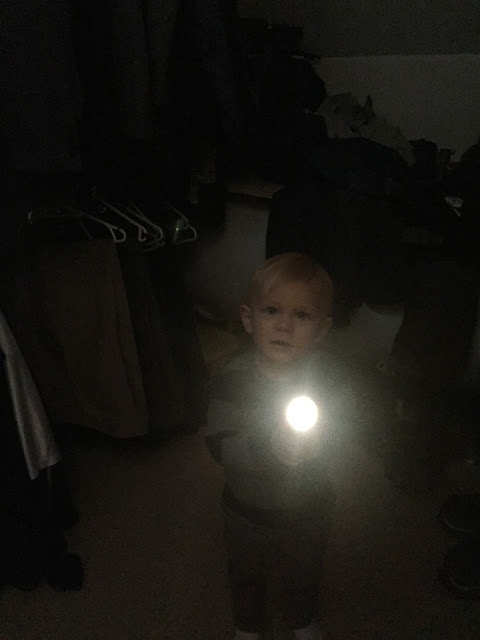 Once that fun was finished, he was off to "duppers" (upstairs) for more play. 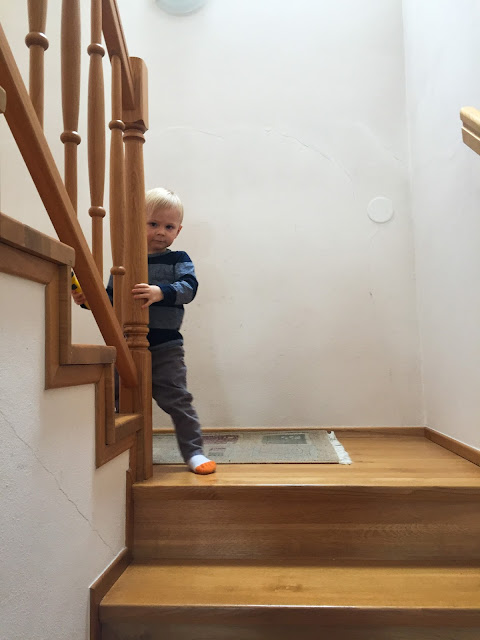 Caleb's old boyhood room has become the play room now; and is called, by Judah, "Judah's room", since he slept there when they first moved here! There are endless possibilities in here that keep him occupied the longest of anywhere in the house. 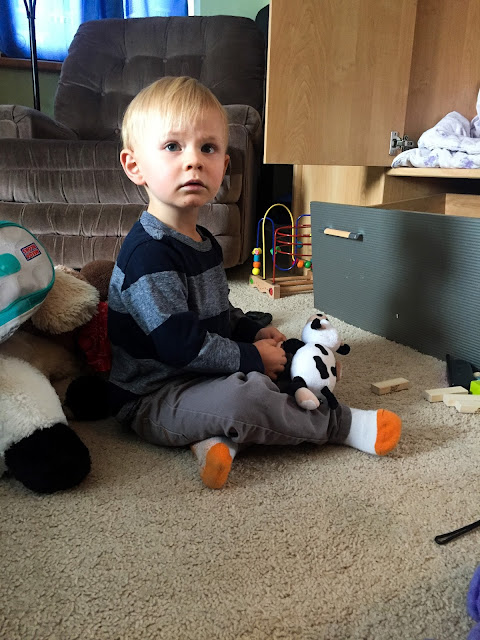 Which can be for anywhere between two minutes and thirty, before we're off to somewhere new! Which in this case was back downstairs, to find the "flute" (an old recorder that I'm glad I kept around!) which he carried around for a while, as he worked on other imaginative play...like fitting the key into the hole of this cabinet. 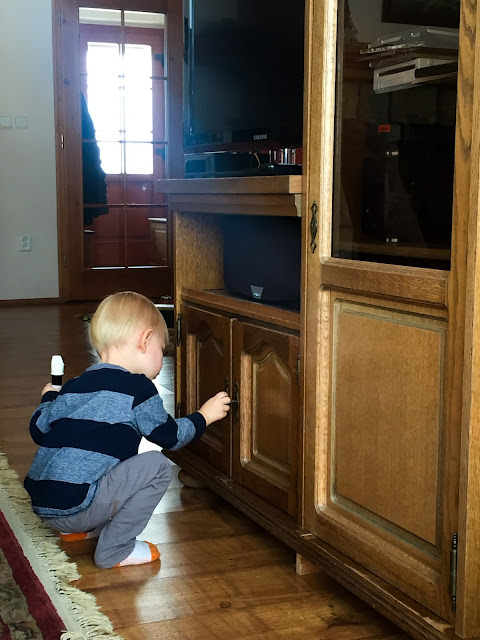 That's been one of his favorite activities every time he comes over. I'm surprised we haven't lost the key yet!

Since there are toys right next to the cabinet, it was just a hop over there to find "Honey Bunny" who is always waiting at Nonnie's house when Judah comes over. He loves her! 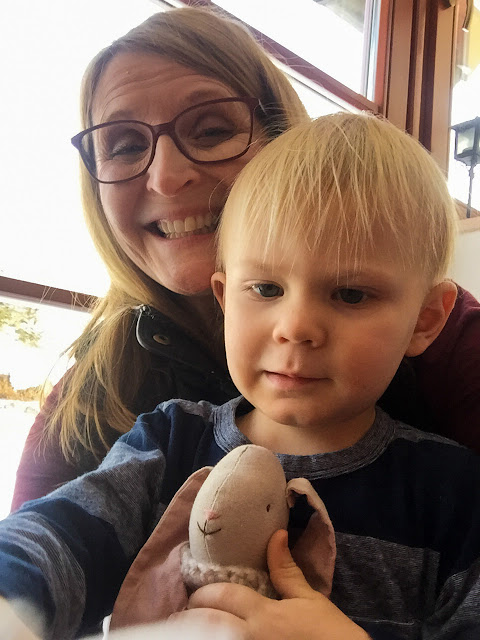 After some play with her, he dug into the toy box nearby and found an old cell phone, his daddy's first one when he was about 13 or 14! That led to some good phone conversation between he and I! 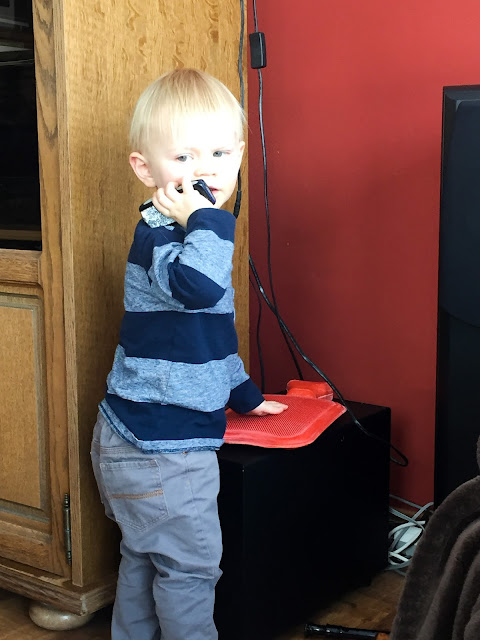 Then it was literally a minute here... 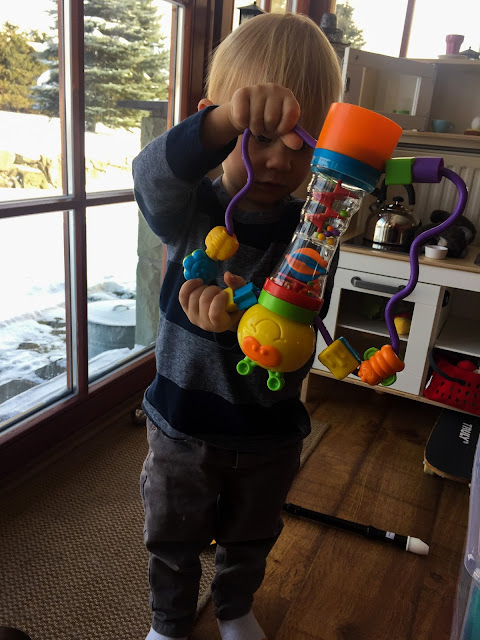 And a minute here... 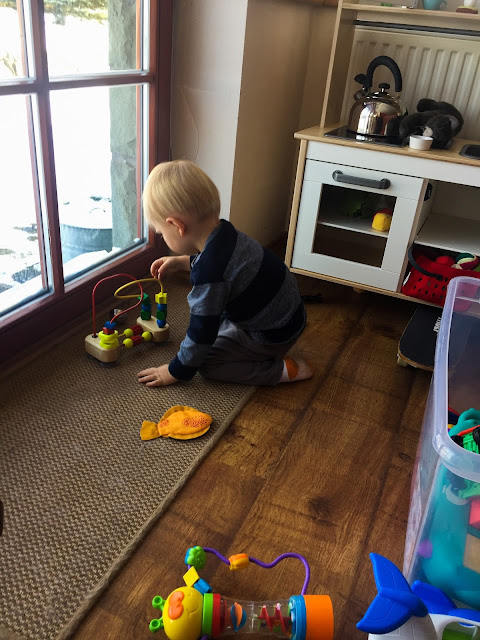 And then a good ten minutes of cooking in the kitchen! 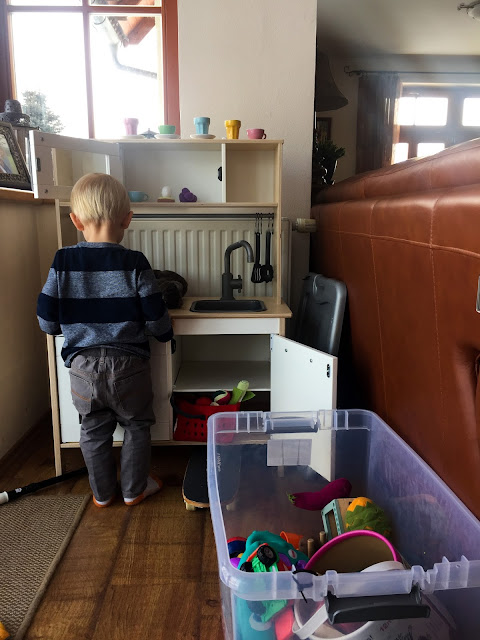 After that, we were back upstairs to Judah's room, and in particular, to the inside of the closet that has what we call, "the cozy spot"! He likes to climb in here and make all kinds of imaginative play from here. 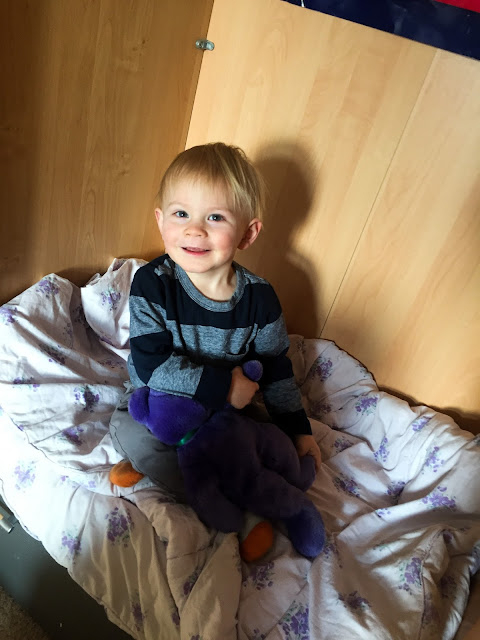 But soon he was calling out to Claire to come upstairs with us, and explore the attic - a new place he's recently discovered. 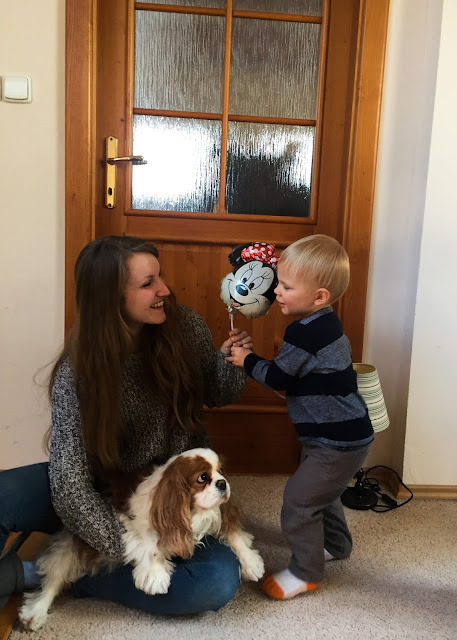 He found this Minnie Mouse balloon the last time he was here, so wanted to go get it out of its box; which happens to be a box of Claire's childhood memorabilia. Would you believe that balloon was given to her by a friend of ours when she was three years old?? How it is still inflated (and how it is that we still even HAVE it) is a mystery to me! But it sure was entertaining to Judah. 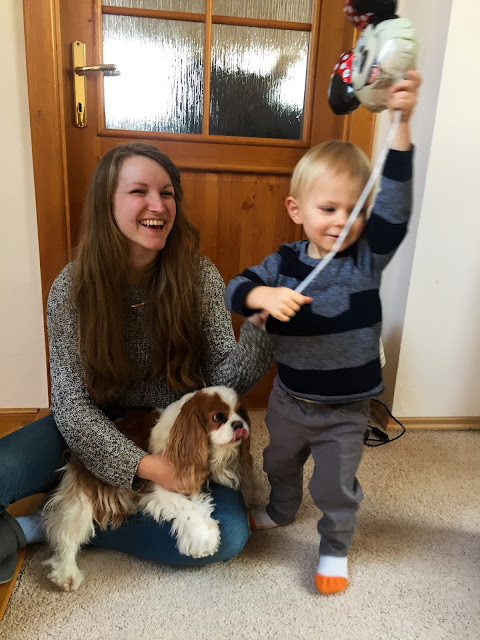 As was a previously unopened cupboard upstairs where he discovered our collection of VHS movies.

Someday it will be fun to watch some of those movies with him...if our VHS machine is still working!

Thought it's hard to know if those old Disney movies will capture his imagination in the same way that flashlights and balloons do. Probably not. 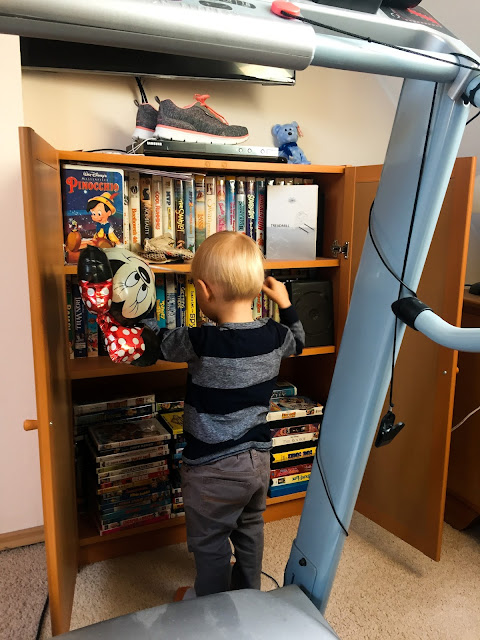 Shortly after our venture upstairs to the attic we were back down to Judah's room to pull out the basket of big duplo blocks. 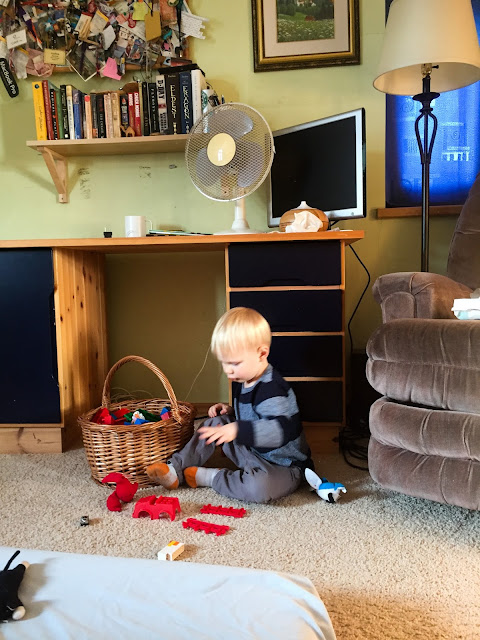 And then it was on to a book which I read twice to him as he sat in my lap, and Asher crawled around! 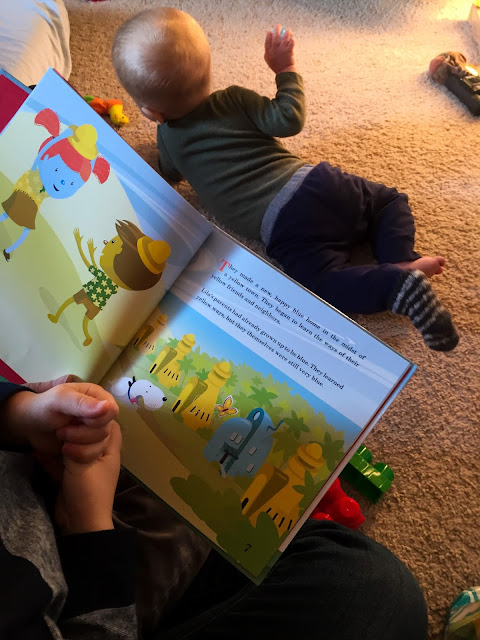 More block playing followed, along with putting stuffed animals into drawers, pretending to take naps in the cozy spot, jumping with Curious George the stuffed animal, turning on and off the lights, rolling a ball to Kaylee, riding around the kitchen on a little push car, eating grapes, playing the drum while I played the piano, playing with Hot Wheel cars, and on and on and on! 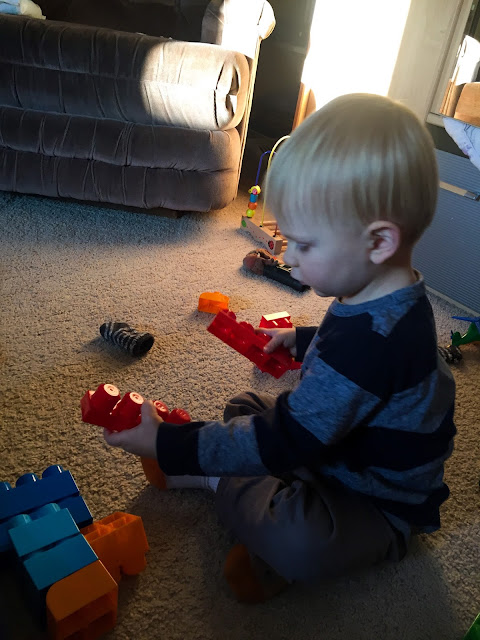 He's a busy boy! But it's all so good! He is interactive, imaginative, enjoyable and full of spunk; and of course I love that I get to opportunity now to watch him grow. That brings me a lot of joy! 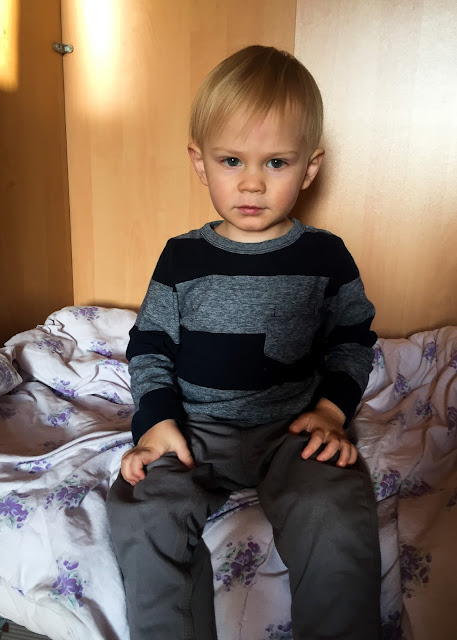 Of course there were other things that happened today too...like Asher interacting with his daddy and Aunt Claire over theological discussions. 😉 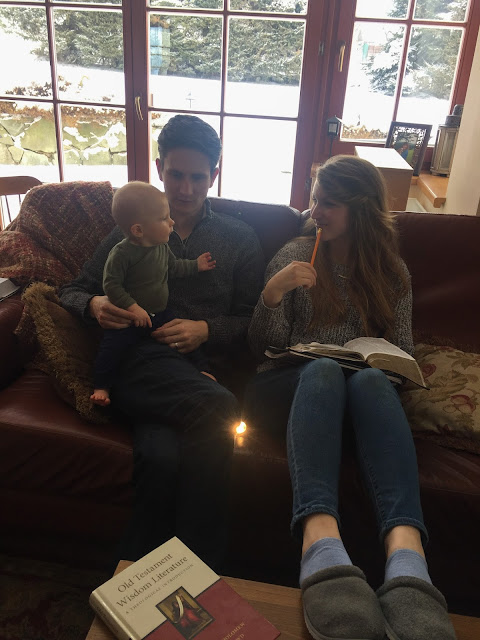 And these two little boys enjoying their daddy! 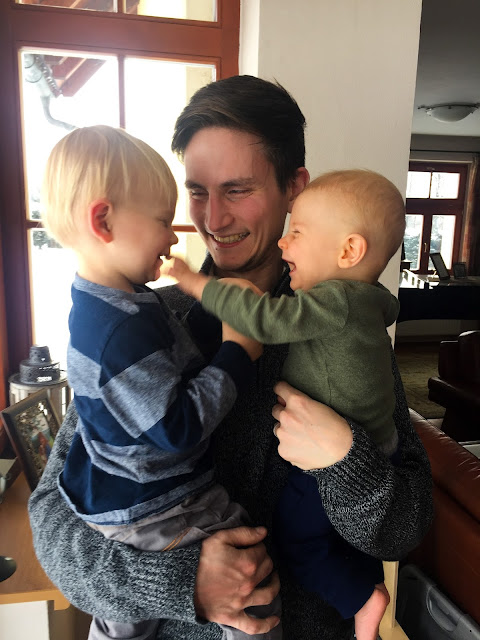 And their daddy enjoying reading the Bible outloud in Hebrew to my friend Sharon, who stopped by for a visit (and is studying Hebrew in seminary right now). 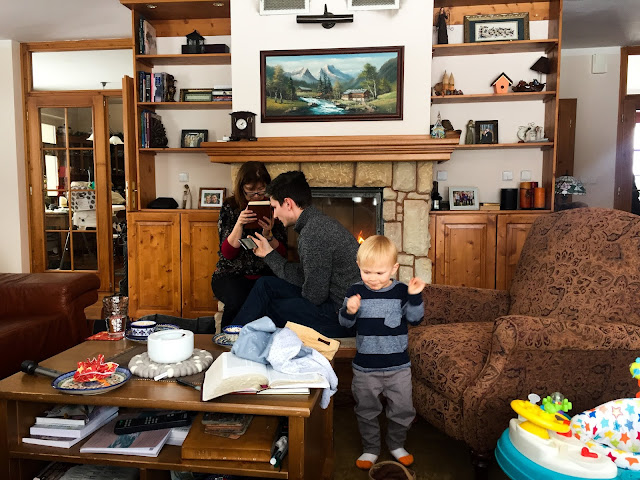 It was a full "Family Circus" kind of day inside our house, and I loved every minutes of it!
Posted by Living By Lysa at 10:30 PM