Was anyone praying for me this morning??

I went to bed last night still hurting, nauseous and weak, beginning to wonder when/if (you do start to wonder when it's so bad) this migraine would ever stop. It's definitely taken its toll on me (and our family).

But this morning when I woke up, I could tell something had changed, lifted. I cautiously got out of bed and...felt very little pain!

By 9 AM this morning, it had pretty much lifted. THANK YOU LORD!!!!

It's hard to describe the feeling of being without pain after having had it constantly for two weeks. It's AMAZING!! I felt like a new (albeit, a little on the weak side) woman.

I actually left the house today for the first time in two weeks (other than having gone to the hospital). Just that little trip into town to get some groceries wore me out. But on the other hand was so exhilarating...felt like I'd been released from jail or something.

Dave went to the hospital this afternoon to get my final report, and they strongly urged him to get me to the neurologist here in town tomorrow as they're still concerned about me. So I stopped by and had Claire run in to see what time he's open tomorrow. And...he's on vacation THE WHOLE MONTH OF MARCH! Can you do that?? I guess so!

Not sure what I'll do next regarding the doctor - I trust the Lord will give me the next step. I am just grateful that He released me from the grip of the migraine right now. To be pain free is so blissful!

I haven't had much of an appetite this whole time, as you can imagine. But when I was at the store today, I finally realized what kind of day it was... 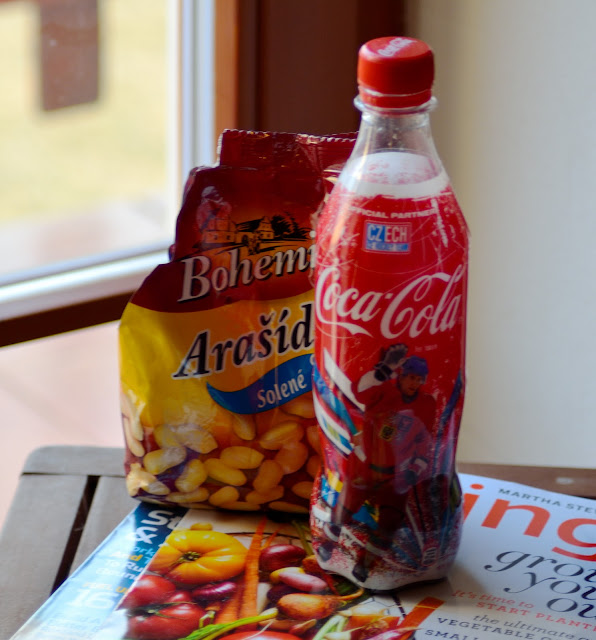 A Coke and peanuts day! Yep...that's one of my "go to" things for a pick me up, a perk, a reward for having endured. I relished every peanut, and every drink of "the real thing"!

I do realize the irony of them sitting on a magazine about vegetables. Yes...I'll get back to those soon. But oh those peanuts and Coke...just the right thing after being released today!

Thanks for praying!!
Posted by Unknown at 7:27 PM