Even after almost 19 years of living here in Czech, there are a few grocery items that, on occasion, still come home in my suitcase when I'm traveling back from the States - tastes that are still "home" to me.

Today a few of those tastes, albeit from GB via Prague, were delivered to my doorstep, thanks to Robertson's, an import deli in Prague. 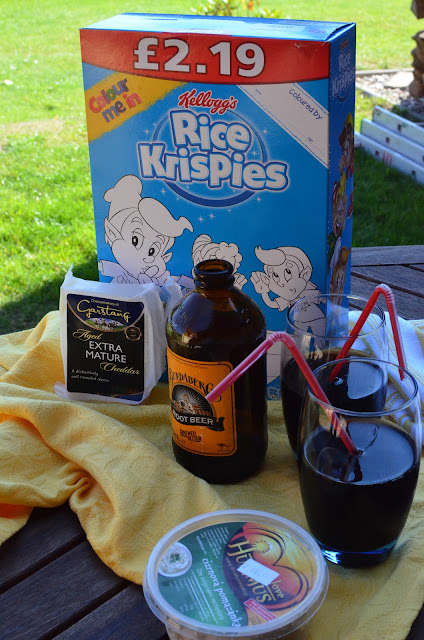 Since 2004, they've been importing food items from Great Britain. But I didn't find out about them until just a few weeks ago when I saw something about them on a friend's FB page. (Thanks Andra!) It was fun to get on their website and browse around to see what we might want to try.

The Rice Krispies are for a recipe for homemade Luna Bars that Claire tried last week (with the last of the Rice Krispies we brought back in the summer). Oh my, were they ever so yummy. I bought those in hopes she'd make them again (did you get the hint Claire?!).

We make our own hummus but I thought I'd try out theirs since it was reasonably priced and I've never seen it in any shops here on this side of the country. Claire said it had a good taste but needed more olive oil.

The extra mature cheddar cheese is perfect! It's the one thing out of this collection that I'd definitely order again to satisfy my craving for that sharp cheese taste.

The root beer was...hmmmm...interesting. It's Australian. Don't know if it's a typical or unusual taste there. But it wasn't exactly the taste I was expecting. Oh well! It was worth a try. I only need a root beer every once in a while so I guess I'll still be waiting to have that taste when we're in the States next time.

All in all, a fun package that perked up an otherwise fairly normal day today!

**An added note to this post...Dave tried the root beer later on that evening and liked it! He said it tasted like real root beer to him, the kind that his family made when he was growing up! The kind that started exploding in the garage when it had fermented too long! :) Glad at least he liked it.
Posted by Unknown at 4:12 PM