Search and Rescue: In Practice

Yesterday afternoon, in the middle of our JV fall conference on evangelism, thirty six groups of 5 people went out into the surrounding area, within an hour of Malenovice, to share Christ. 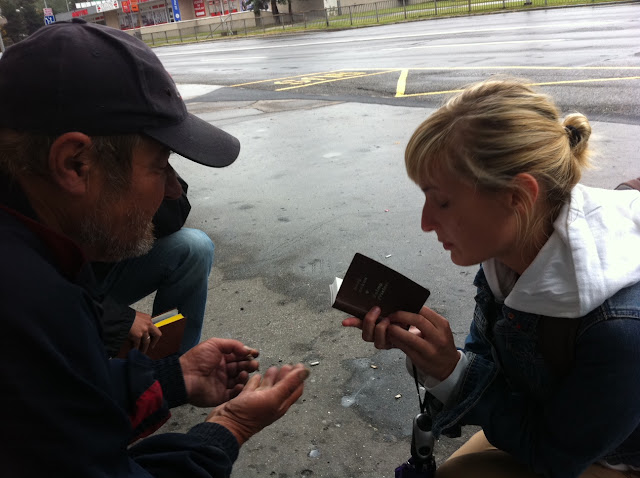 One of our JV national staff from Estonia sent Dave this photo - she is from the Ukraine (and is at the conference) and he is a homeless man in Frydek Mistek, a town not far from Malenovice.

There were literally hundreds of these kinds of conversations yesterday: in malls, on the street, in cafes, in stores, on trains, in homes - in fact, at least 340 people heard the Gospel, and seven or eight (I've heard both figures) trusted Christ!

The teams were back at the hotel by 8 last night and had a beautiful time of sharing testimonies of how God had worked, in the lives of those they shared with, as well as in their own lives.

One of our teammates led someone to Christ in a sport's store, while the young man was working.

Two of our staff had a conversations at the local university with a man who had a meeting cancelled just two minutes before they saw him, which allowed them to spend two hours sharing Christ with him.

Another of our staff shared Christ six times while riding the train back and forth into the city.

Others walked the malls and courageously approached people who seemed to have time to have a conversation.

It was challenging, encouraging, discouraging, and exhilarating...and everything in between! 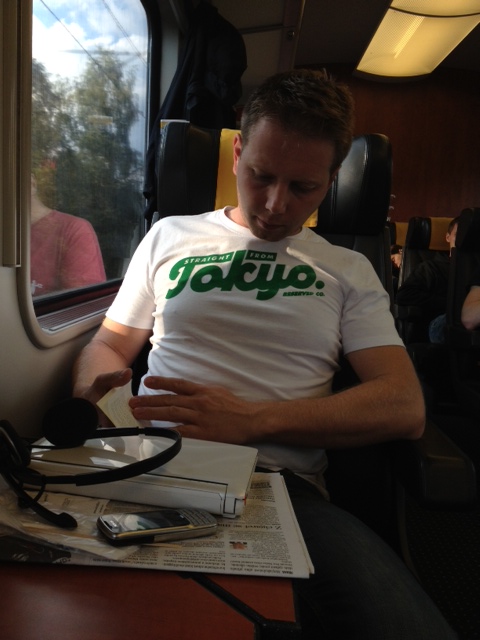 One of our board members sent Dave this picture just a few minutes ago as he is on a train to Prague, headed home to the States. He had the opportunity to share Christ with this man who sat down opposite him.

I love what he wrote:

"Here is my new friend flipping pages in the New Testament that Dusan gave me in case I had an opportunity.  My seat mate and I are having a great visit and he has now heard the gospel.  He wants to think it over and says he may read his new bible.  This is a great train ride."

Pray for this young man, and for all those like him who have heard the Good News these past few days!
Posted by Unknown at 6:32 PM