I'm not an English language major.

I don't even really understand grammar in English - I just know how to speak it.

But you know that feeling of "something just isn't right" when you hear it?

Something particular in that regard is on my mind today: when to use "the" and when not to when referring to certain countries.

Oh please do read on! I guarantee you'll learn something today!

THE Czech Republic. Why do we say it that way in English?

Because technically in the Czech language it's known as Česká republika.

If you're an English speaker, and don't know Czech grammar (which believe me, I don't know it well either!), you wouldn't know what's hidden in the way that the name of the country is written and spoken.

"Česká" is an adjective, describing what kind of republika it is. It's a Czech Republic. It's not a Dominican Republic, or a Soviet Republic...it's the Czech Republic.

Why on earth does this matter??

Because some English speaking people mistakenly refer to this country as "The Czech".

But that would be like referring to the U.S. as "The United". And we never say that!

See, "united" is also an adjective...it describes what kind of "state" we are. We all subconsciously know that in English, whether or not we understand grammar, so don't make that mistake and refer to our country as "The United".

So please, no more referring to the Czech Republic as "The Czech"!

While I'm on the subject (might as well keep going since you're still with me!)...

Have you ever mistakenly said, "The India", "The China", "The Iceland"? Probably not!

But you know what most Americans DO say when referring to one of the countries that our JV staff serve in? 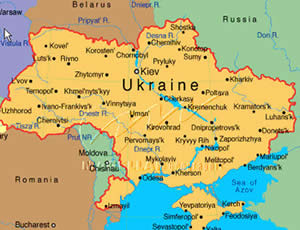 Guess what? That's not right! It's just "Ukraine". Like it's just "Italy" or "Greenland" or "Australia".

The "the" is a holdover from the days that Ukraine was under the Soviet government. It was one of "the" former Soviet republics. I don't know why that one specifically ended up being referred to as "the" (since other former republics didn't) after the break up of the USSR, but it did...and even I have been guilty of referring to it that way.

So here's my quick tutorial:

When referring to Ukraine, you can only say "Ukraine" if you want to be correct about it!

NO MORE "The Czech" or "The Ukraine". For different reasons, neither of those are correct.

That's my "setting the record straight" for today.