What you see the very first time you visit a place you've never been before, is something you never forget.

Even if you visit again, it's quite often those first images that permanently define the place.

After having lived in Europe for nearly thirty years, I don't visit very many "new" places. Certainly not because I've been everywhere. It's just that either I don't have time to get there, or I like the places I've been so much that I keep going back to them.

But, I've just been to a "new" place. And it's definitely a place I want to go back to! 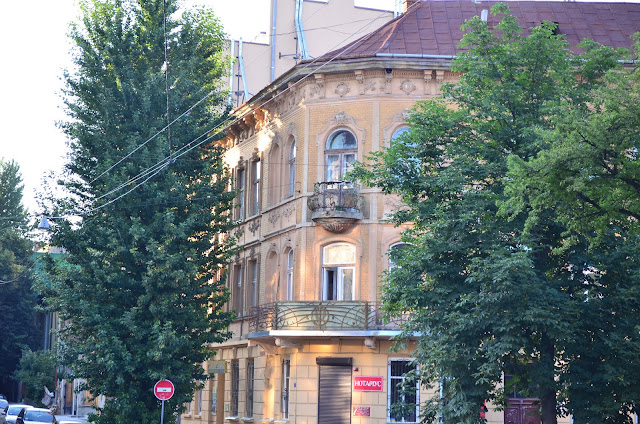 In this gem of a city, there were truly surprises and delights waiting around every corner as we visited our JV teammates there.

The first one? While I'm guessing you can't read what any of those signs say (yes, the Ukrainian language is written in Cyrillic), it's an awesome little apartment that Ben took us to when we arrived at 6 AM after an all night train (see HERE for Claire's description of that!). 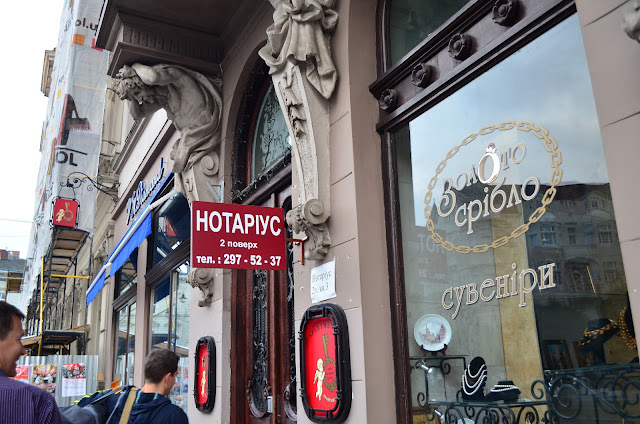 It wasn't that it was fancy or had any particular perks. The part I liked the best? The name!

And honestly, I slept the best I've slept in quite a while the two nights we stayed there. How could you not?! 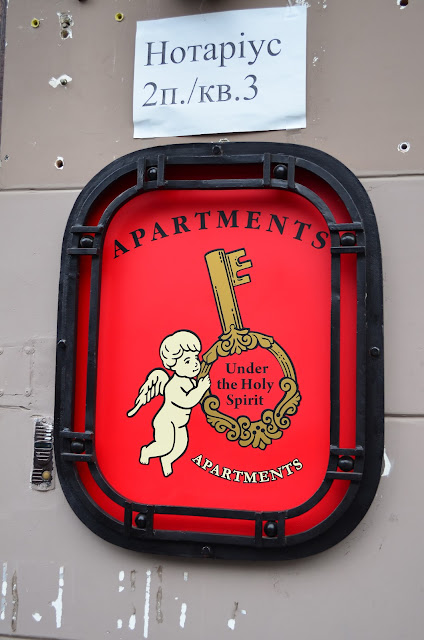 Down the street from the apartment, which leads to Lviv's old town, is the local bazaar. What a literal feast for your eyes (and taste buds!). The market was filled with vendors selling everything from fresh fruits and vegetables, to meat, bread, pastries and just about anything else you could imagine. 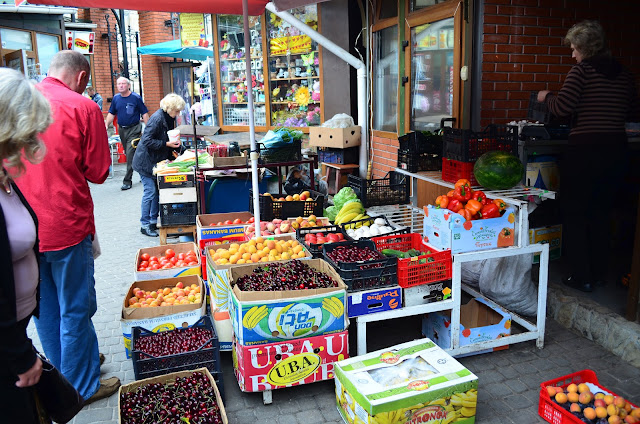 But that's just the tip of the iceberg where food and drink is concerned. I know it's not like this everywhere in Ukraine, but oh the cafes in Lviv!! You could spend months going to a different one every day. They know how to do cafes and coffee! 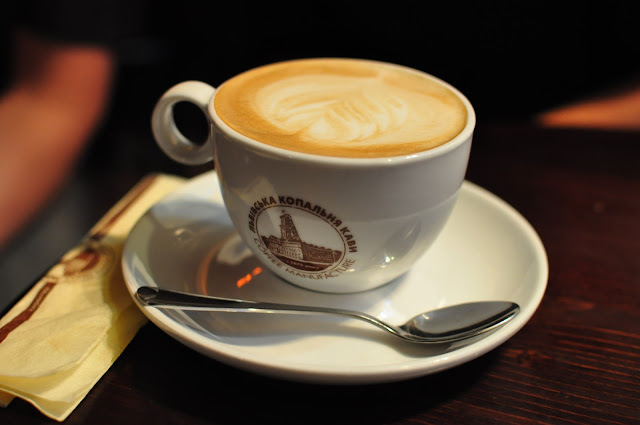 While I'm on the subject of food, I can't forget to mention the chocolate of Lviv. Handmade right there in the old part of the city, it's truly some of the best I've had. Oh yes, I'd like to go back for more of that! 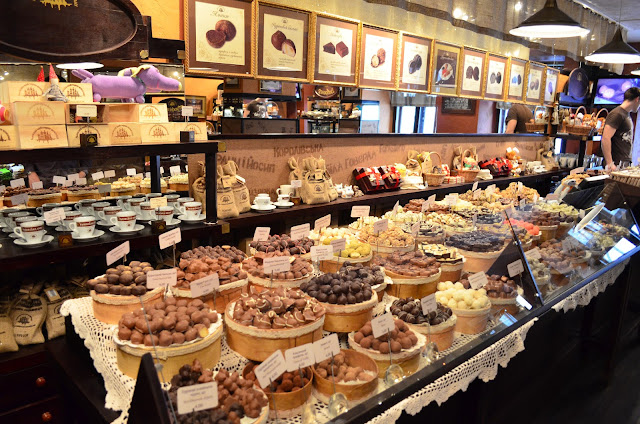 Walking through the city, as we did for hours, was a feast for the eyes. If I posted all the pictures I took, we'd be here for hours so I won't do that!

But a few things I found delightful were the book bazaar that is out every day in this square. 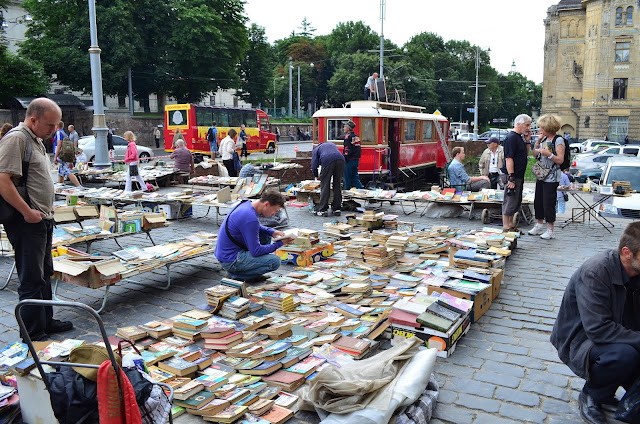 And this rooftop view of the city, with a fellow keeping watch day and night! 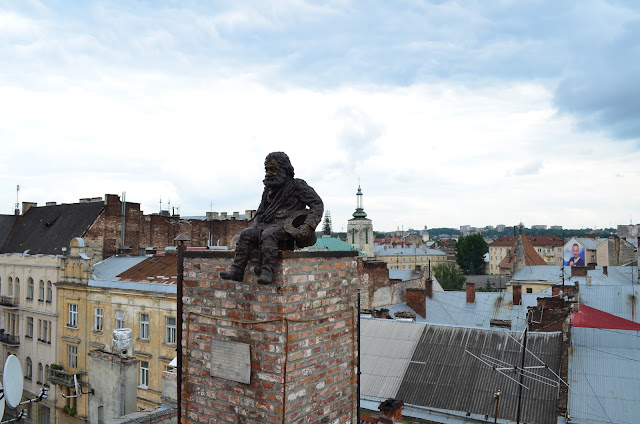 A city with an active cultural and music life, there were musicians everywhere. This fellow is playing an instrument made in Ukraine...anyone know its name? It was beautiful to hear as we walked down the streets.

And would you ever have guessed that Mozart's son, Franz Xavier Wolfgang (also know as Wolfgang Amadeus, like his father - his mother changed his name after his father died when he was only five months old) spent thirty years here in Lviv, teaching music and directing a choir? 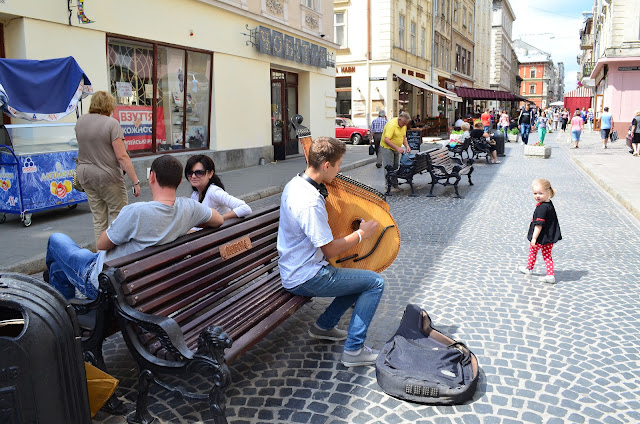 Some buildings have been restored in the city, like this one on the main square which is really lovely. 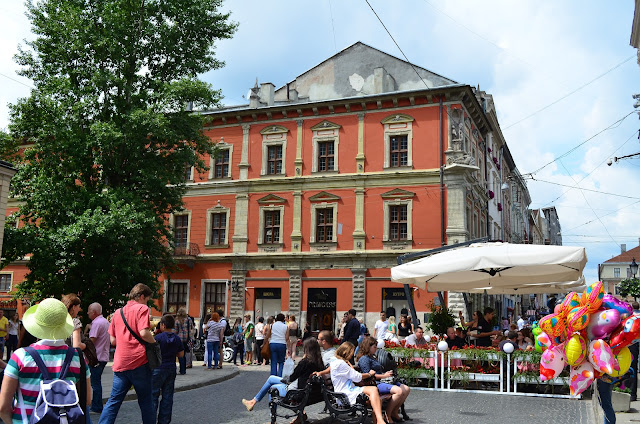 One afternoon we spent an hour on this motorized train that gives an excellent tour through the city. With headsets on, and six languages to choose from (we chose English - ha!), we learned all sorts of interesting details about Lviv's history. 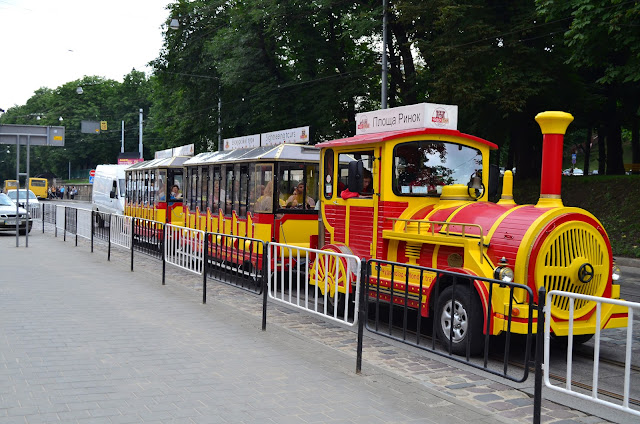 Riding down the bumpy cobblestone streets, we got a glimpse of not only the architectural charm and beauty of Lviv, but a window into the difficulties of car travel in the city! Every one of these cars, buses and trams has someone in it trying to get somewhere. Who has the right of way?? 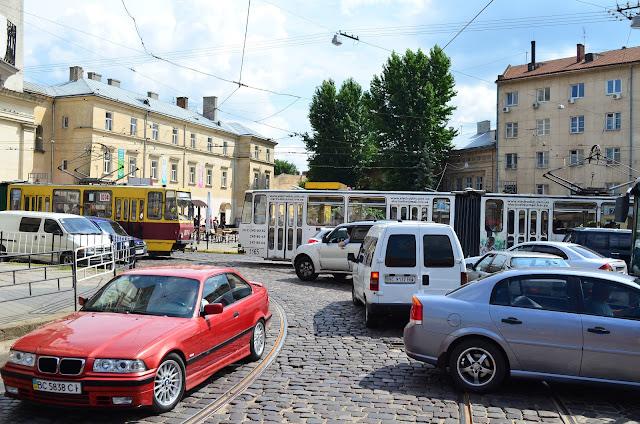 Of course the best part of Lviv was the people. An evening at Ben and Kristy's with some of their Ukrainian leaders was absolutely delightful! 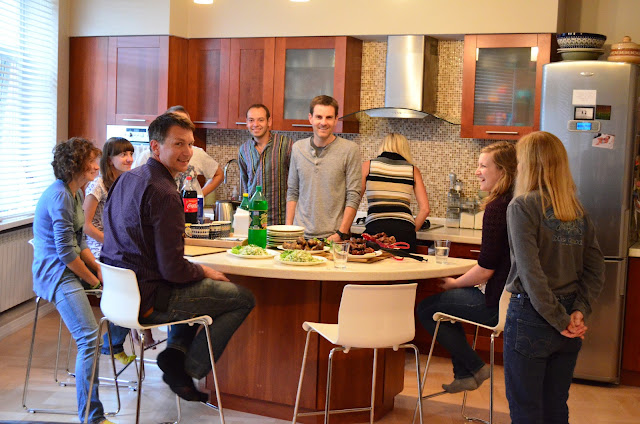 And an afternoon at Tomasz and Miriam's was so wonderful too. Miriam blessed us with a Czech gluten free "babovka" - you can see there wasn't much left over! :) 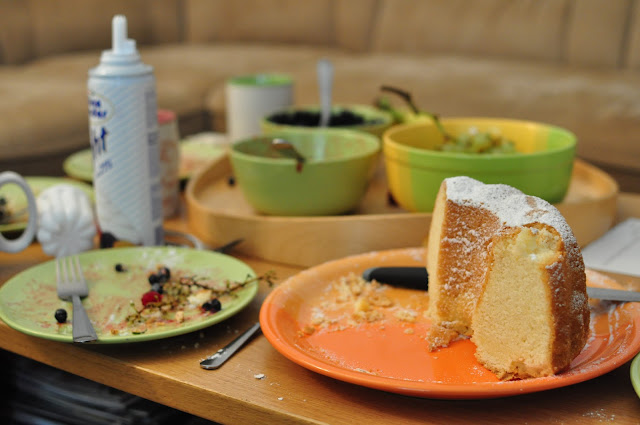 Thank you Tomasz and Miriam for your generous hospitality...and for all you're doing in Lviv to reach young people for Christ. So thankful for you and your witness and testimony to young people in Ukraine! 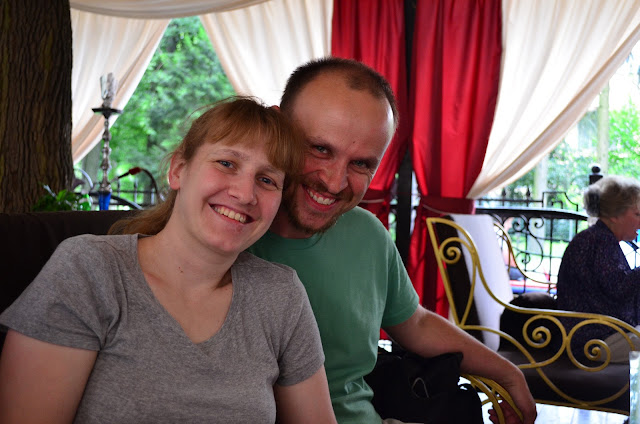 Ben and Kristy, we're so proud of you for what you're doing for the youth of Ukraine, and for your role as country leader there. Thank you for pouring out your hearts and lives to reach the next generation for Christ. 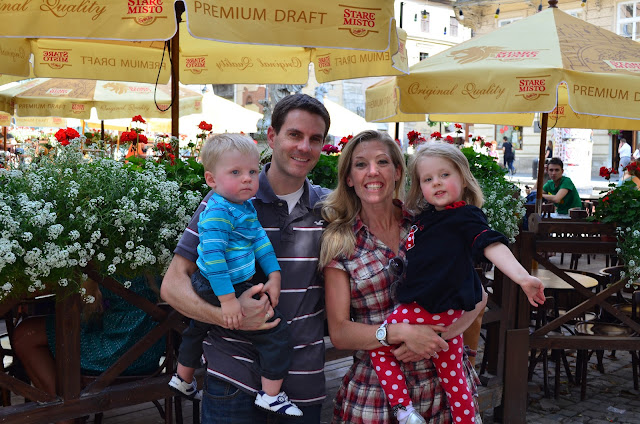 As we walked the streets of Lviv, I prayed for revival to come to this city, to this country. 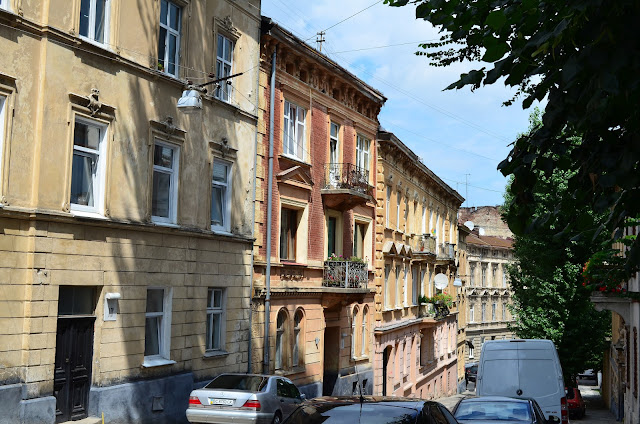 I prayed too that God would raise up more teammates to join the JV team there. In this country of nearly 45 million people, there is a great need to share the Gospel. 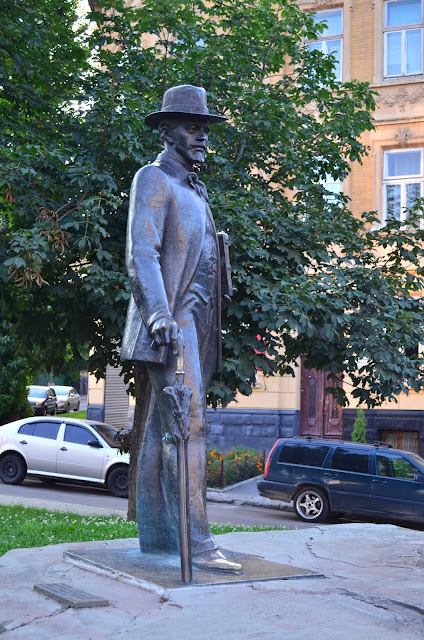 This man made some kind of impression on the city that caused them to cast a statue in his honor.

I pray that JESUS would make an even greater impression on the lives and hearts of Ukrainian young people in the generation to come. 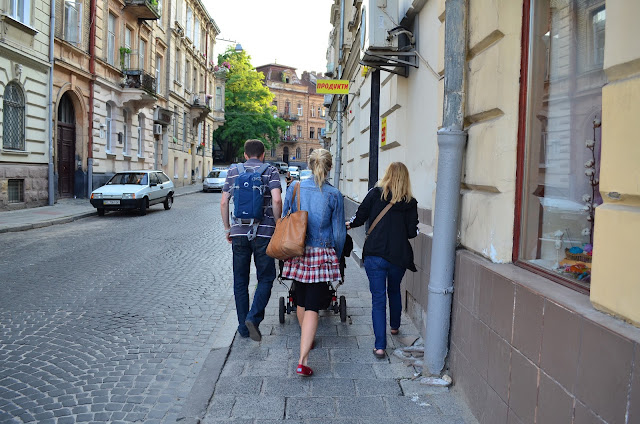 Bless you dear JV team for sharing not only your lives, but the Gospel as well. May young people be transformed by the power of Christ throughout Ukraine.
Posted by Unknown at 8:00 AM