Getting to Croatia, Part 2

Heading down the A1 late Sunday night, over a particularly lonely stretch of highway through Croatia, our car suddenly died.

And when I say suddenly, I mean we were driving along at 110 kph (over 60 mph) when  all of a sudden everything just went dead. We lost power brakes, power steering and well...power! It was as if a light-switch had been turned off.

At the time though, the even stranger thing was that just minutes before it died, I had read an email on my phone from my sister-in-law saying that a very dear friend of ours had died. It took me a moment to gain my composure through my tears and then say to Dave and Claire, "A dear friend of ours is in heaven."

And then, the car died.

Dave managed to steer the car (which was pulling our boat) off to the side of the road where we all just sat in shock.

Both from the news about our friend, and the fact that the car had so unexpectedly died. In the middle of nowhere.

Our friend who died was Pam Reeve, the former dean of women at Multnomah Bible College where we both attended. She's had a profound impact on literally thousands of lives throughout her 96 years on this earth. But I would venture to say that most everyone who was impacted felt her mark on their life, whether small or big, very personally. She was just that kind of a woman. How very thankful I am for her impact on me!

We'd known that Pam had not been well for a while, but still, to hear that she was no longer here on this earth took our breath away. Oh how we'll miss her.

(I've written about Pam's impact on my life before - you can see that HERE.)

After trying to restart our car with no success as we sat alongside the road, with cars whizzing by, we decided together that we should spend some time thanking the Lord for this precious, godly woman.

It was a holy moment.

And felt so right. Maybe God had just stopped our car so that we'd properly take the time to honor her before Him. With the enormity of her impact on us, that would seem appropriate.

As each of us prayed (she's had an impact not only on Dave and I, but on Claire as well), I had that feeling of the hymn, "It Is Well" within my heart and soul, both for Pam, and for what was happening to us on this lonely stretch of Croatian highway. And I could almost hear Pam's voice reaching me from heaven, reassuring me that God would be enough, and to have faith! Yes, that's what she would say.

After the last whispered, "Amen", Dave turned the key in the ignition and the car started.

We pulled back onto the highway, literally shaking our heads in wonder at what had just happened. It truly seemed that it was a God appointed moment to stop for those minutes. And now we could be on our way again.

Ten minutes later, the same thing happened. Not once, not twice, but three times until we finally limped into a rest area where we, thankfully and safely, spent the night, Claire curled up in the car, Dave and I inside the boat. 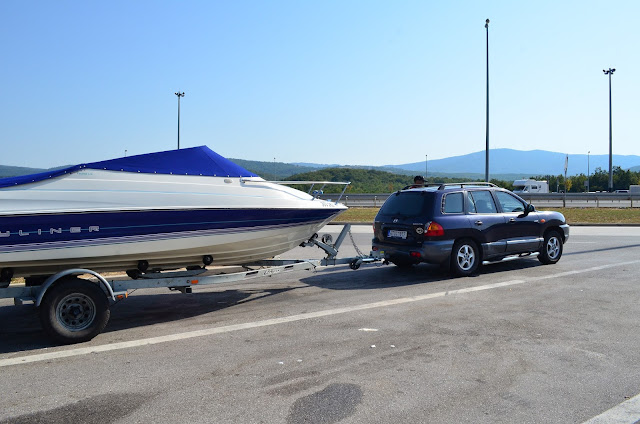 Oh yes, the story continues on! But it's just too long to tell in one or two blog posts. So...