Our day of goodbyes to Claire, Tyler and Lara, started with a drive to the ferry at 4 AM. Definitely a memorable way to start out going to college for Claire! 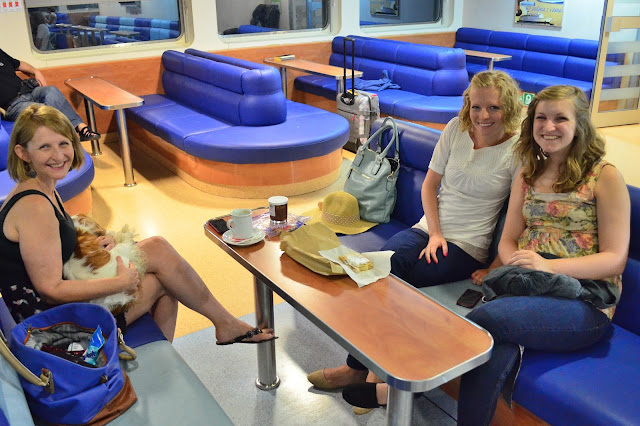 This was an incredibly eventful day for Dave and I...sending our last child off to college and starting a new chapter of life together as just us again.

You seriously ask yourself on a day like this, where did 23 years go since our first one came into our lives? While we have packed a lot into those twenty three years with our three children, and have no regrets about anything in our relationships with them, you still feel that sadness, mixed with joy, that comes along with one amazing chapter ending before another exciting one begins.

That was our Thursday. Standing on the cusp of that very moment when one part is ending, and another is beginning. 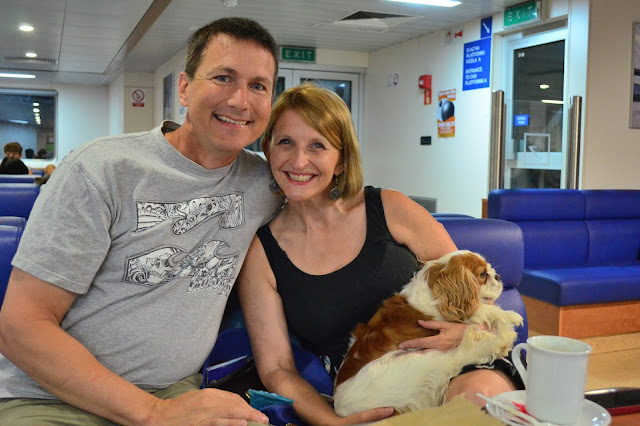 It actually helped to have some time on the ferry before making the drive from the port in Split to the airport. A latte for me...a nap for Tyler...talk time for us girls. Very peaceful. 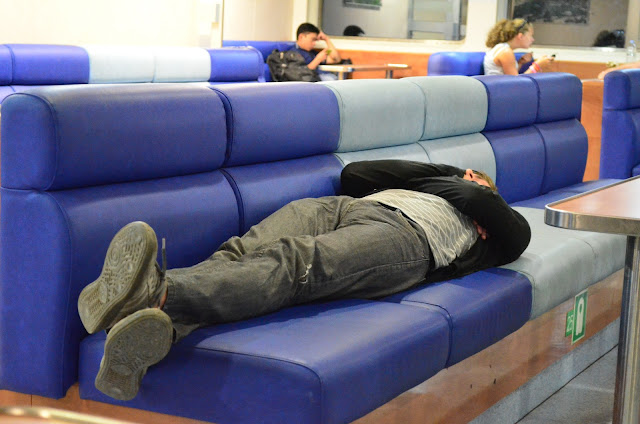 But eventually we were pulling up to the airport and my emotions were beginning to kick in. 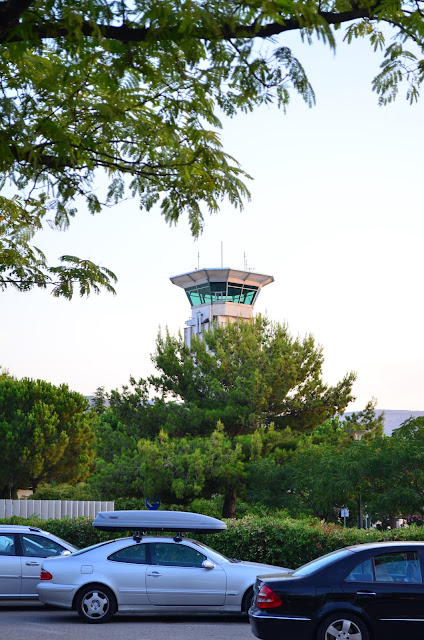 Taking last looks at our precious kids and soaking them all in. 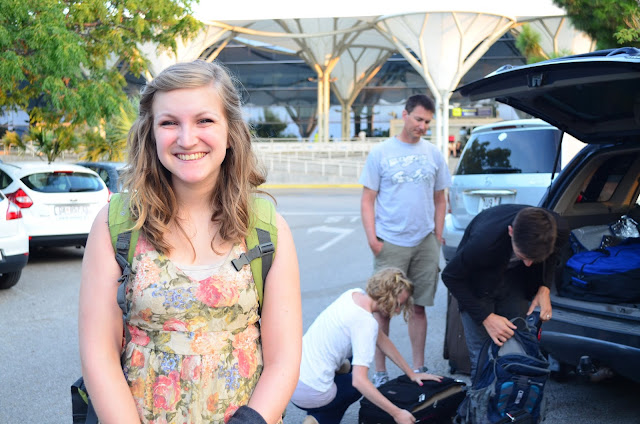 Remembering all the mom-daughter pictures we've taken through the years. And of course taking a few more "just because". 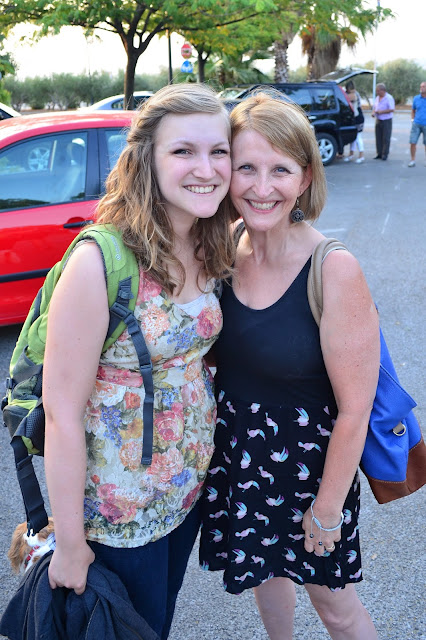 One of the big things that helped in the process of goodbyes was the fact that we saw Tyler off from this very airport four years ago when he first left for college in Chicago.

And now he was back with his dear WIFE!!!  Would never have imagined that when we said goodbye to him back then. In that case, we're thankful for the passing of four years and what it's brought...or rather WHO it's brought! How we love Lara! 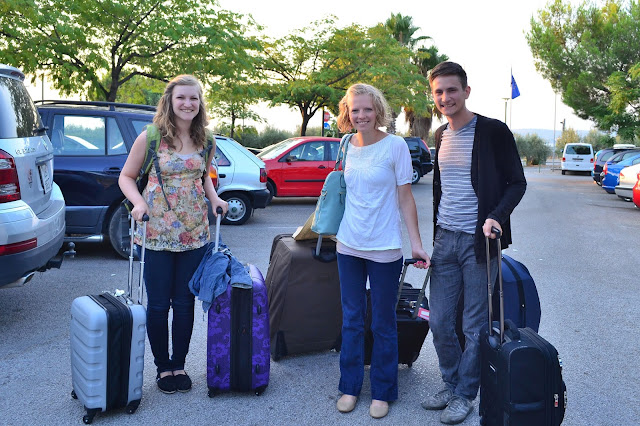 And still...everything in me wanted to shout "STOP", just like what was painted there on the road! No, no...I don't want you all to leave. 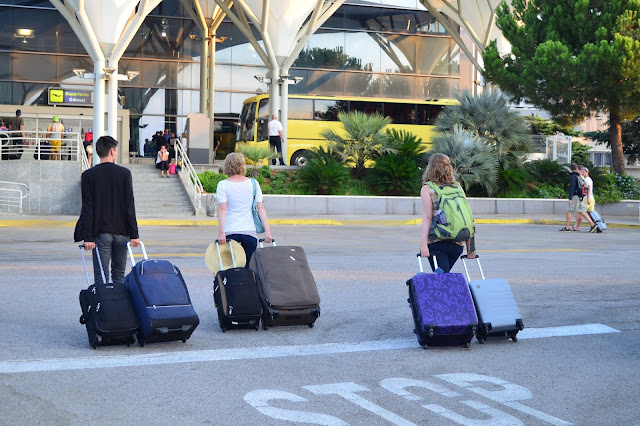 But I know that one of my greatest privileges of the past 23 years has been preparing each of our kids for this very moment. The moment they "fly" on their own and become all that God's intended them to be as adults. If I stopped them at this moment, I'd be messing with His plan for them, and I sure don't want to do that.

So I just let the goodbyes happen, watching with deep emotion, as even the smallest of goodbyes are said. 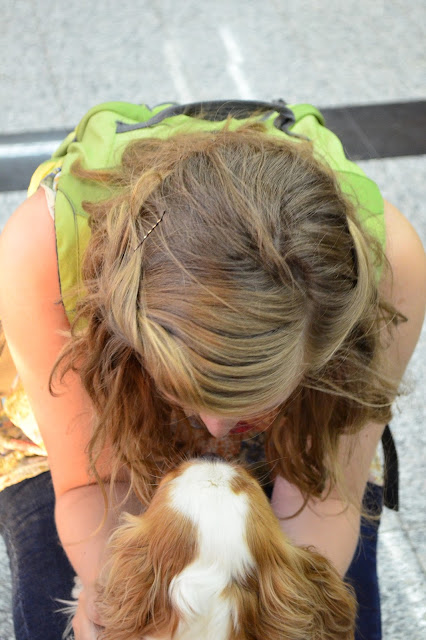 We take one last photo of who we've been for the past year... 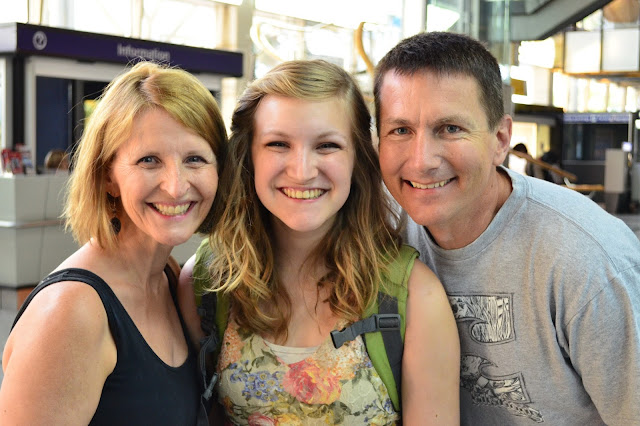 And one more mom-daughter shot to mark this precious moment. I couldn't help but remember the first time I held her in a German hospital, so excited about God's gift of a daughter on top of two sons. What an amazing gift she was then, and still is today.

Yet now I must release her. Whew. Definitely not easy. 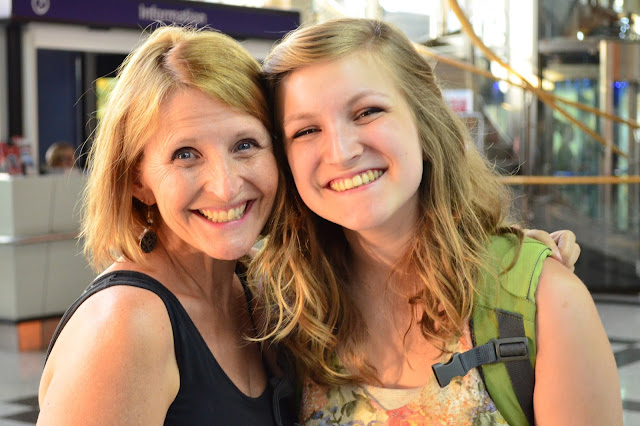 For a few more moments of normalcy, we headed upstairs to get coffee in the very place we had it four years ago with Tyler before that goodbye with him. It felt so good to sit there and just be family with our precious kids before it becomes just "us" again. 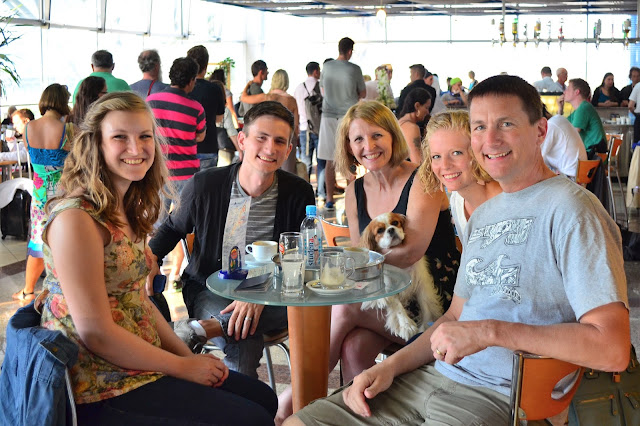 But the clock keeps ticking and finally it's time to go downstairs and do what we came to do. 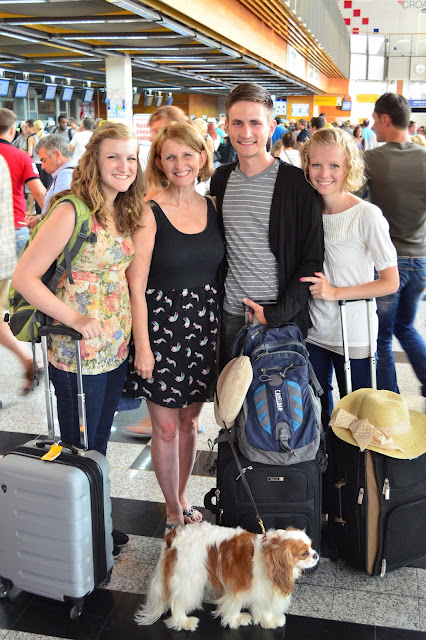 Release our dear ones into God's arms and let Him be their daily caregiver.

As if I ever was the main one! God entrusted me with three darling children to mother, but often reminded me that I was not their Father. He was...and He is! 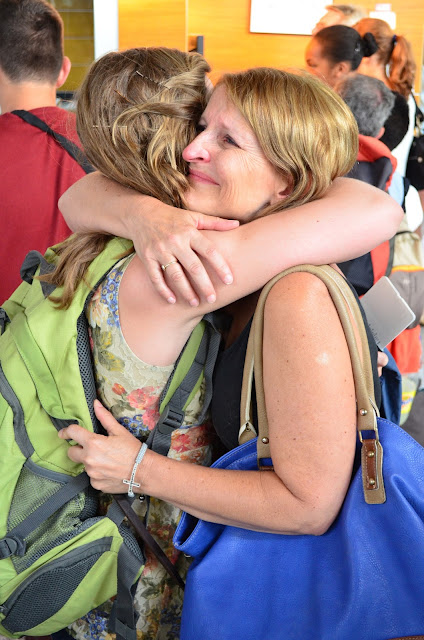 Remembering that fact makes it a tiny bit easier to smile, to say a few last words, to let go. 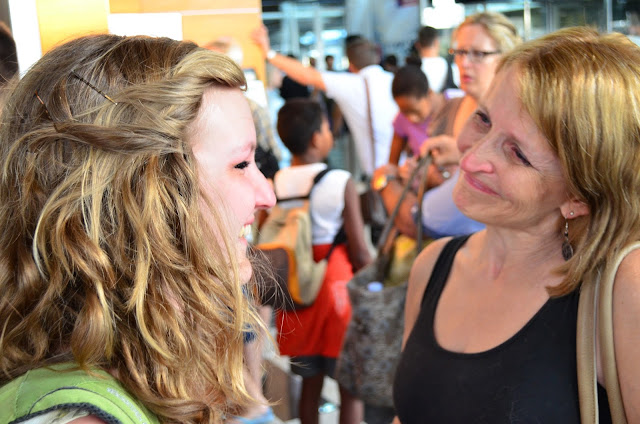 With final hugs and kisses to everyone, including Kaylee, it was time.

The time that's been coming for twenty three years. 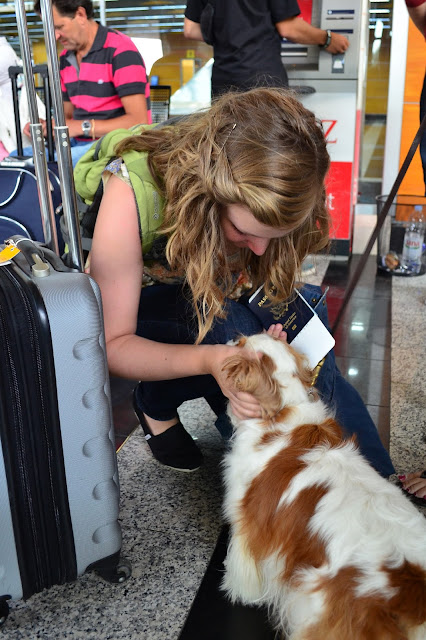 The time of letting go. Of letting others step in to love, care, encourage and be there for her. For them.

I absolutely love that Dave captured this while the three of them waited in the security line.

The older sister, caring for the little sister, with the older brother looking on.

Yes, there will be not only family in Chicago for her, and a host of friends, but also her Father, who loves her more deeply than even I can.

Though it's hard to imagine that through my tears as I watched them leave. 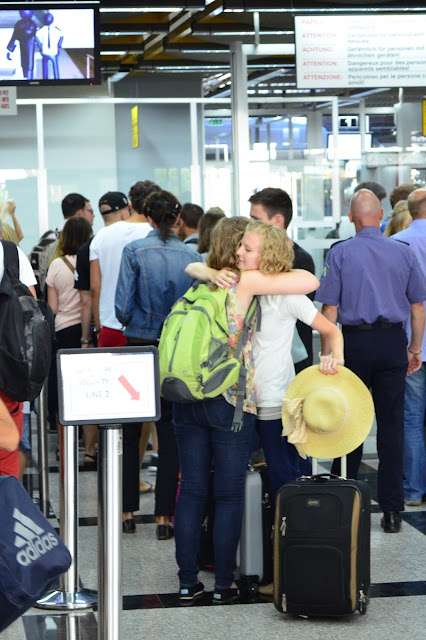 I sobbed in Dave's arms after we took our last glance of them going to their gate.

And we cried together in the car after that.

This business of saying goodbye is not for the faint of heart! It's hard. It's sad.

Claire is ready, just as Tyler and Caleb were ready when it was their turns.

I wouldn't want to keep any of them from all the richness that God has in store - that will only come as they're out on their own. 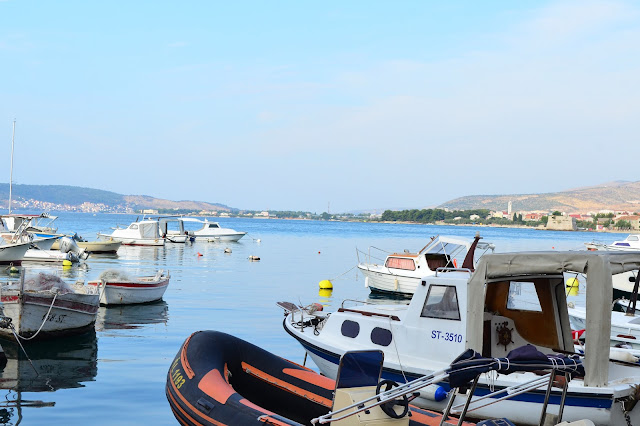 After we prayed and pulled ourselves together, we left to find someplace to have breakfast along the waterfront not far from the airport.

While Dave stepped into a restaurant to see what they had, a notification came through on the "Flight Tracker" app on my phone saying the plane had just pulled away from the gate.

I walked out to where I could look back at the airport to see if I could watch if taking off.

Instead, within five minutes, I saw this beautiful sight overhead. 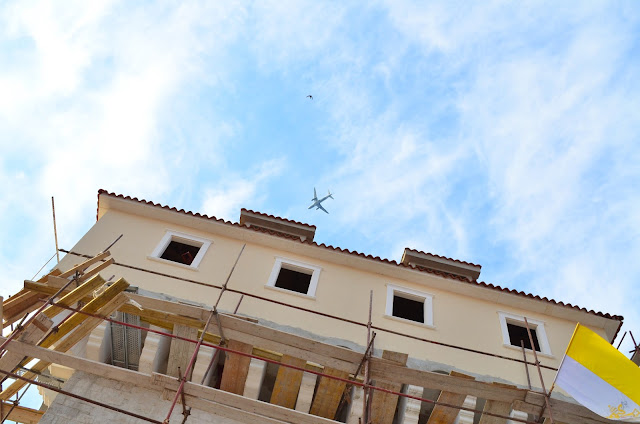 I could see the Lufthansa emblem on the tail as it flew over me, and knew that it was their plane, and that they were safely tucked inside.

Flying on the wings of eagles, being lifted up to soar into all that God has for them, with the care of a Father going with them.