If I ever opened a coffee shop (which I don't intend to, but I'm just sayin'!) I now know what I'd name it.

Several days ago Dave and I were out wandering around the area where we're staying. Just a short walk away, we came across a little cove with not a person in sight. Right then and there I wanted to go back some morning and have coffee, just the two of us. 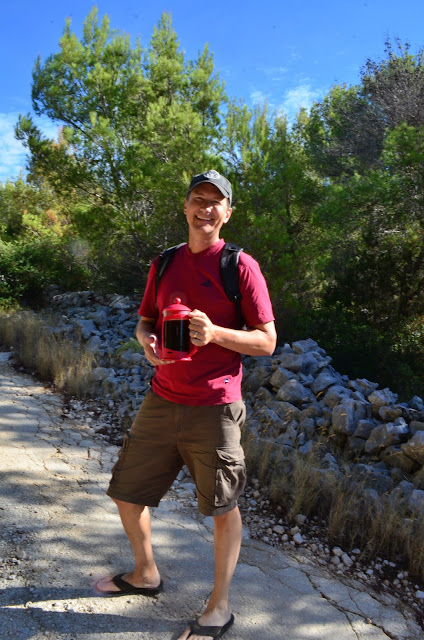 With cooler, cloudy, rainy weather the past few days, this morning was the first day that it was possible. How happy I was to wake up to sunshine and know we could set off for a little morning adventure!

Down the rambling path we went, French Press coffee in hand (we don't have a thermos so had to walk fast so it'd still be hot). 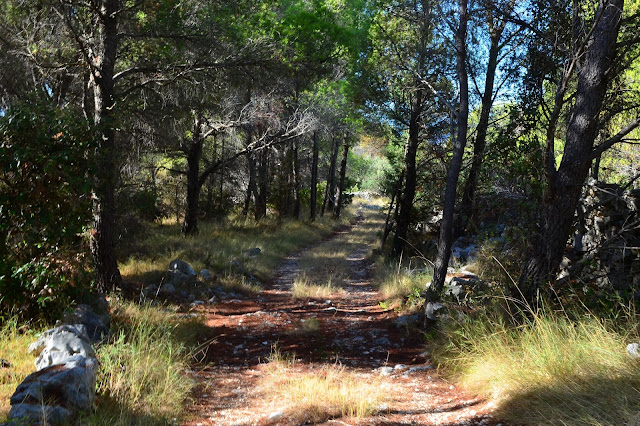 Seriously, you'd never know there was anything down this path, which may look like a road, but the farther you go, the bigger the rocks in the middle, and the narrower it gets...so I don't think any cars travel down there!

Summer homes are scattered in the trees, though no one's there at this time of year so it's all quiet as you reach the steps down to the sea. 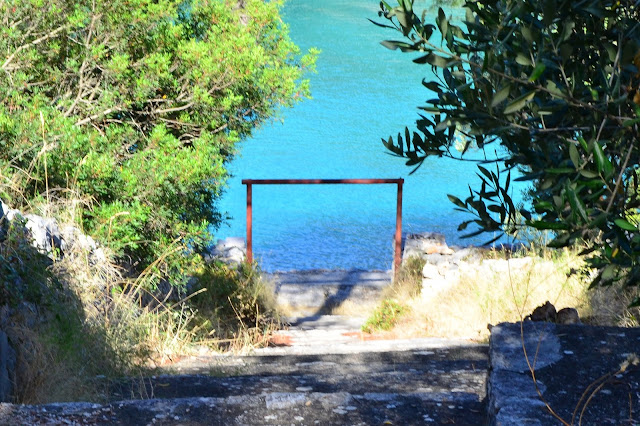 And enter into the Secret Cove! 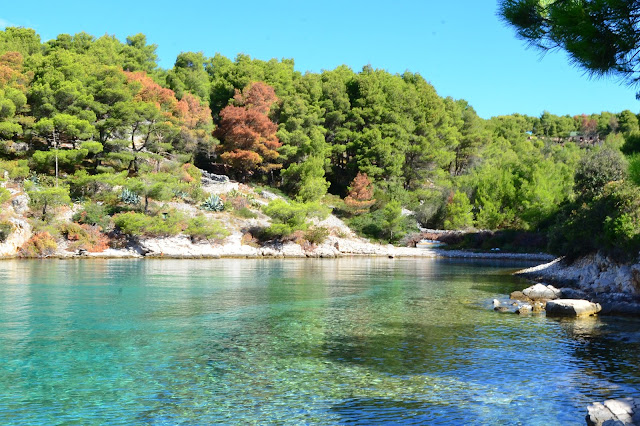 Well, it wasn't as secret as we thought...there were a couple of sailboats moored there this time. When we'd been there before, it was completely empty, giving it the feeling of being in the middle of nowhere. Made for some nice pictures though! 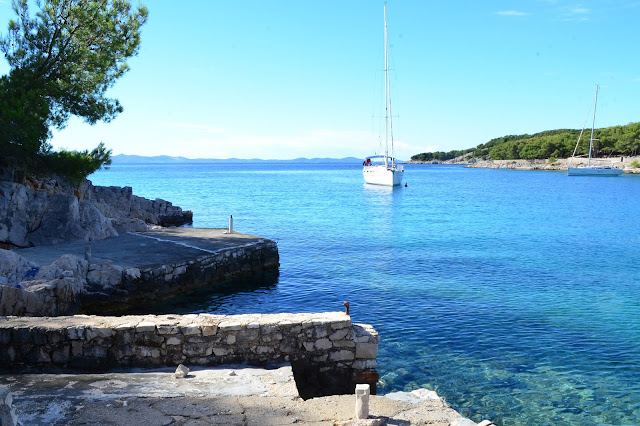 An old dory turned upside down, made a good spot to sit for a picture before we embarked on our morning ritual... 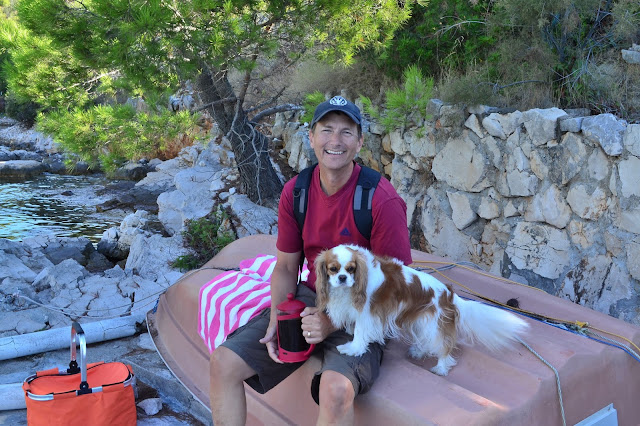 Because now The Secret Cove Cafe is open for business!

This time, with a pot of "Sisters Coffee", from Oregon. I'd brought a bag of beans with us that were in my pantry at home after buying them last year (shhh, don't tell my boys I'm using year old coffee. They're baristas, convinced of the need and rightness for freshly roasted beans).

But I'm telling you...it sure tastes good to me! 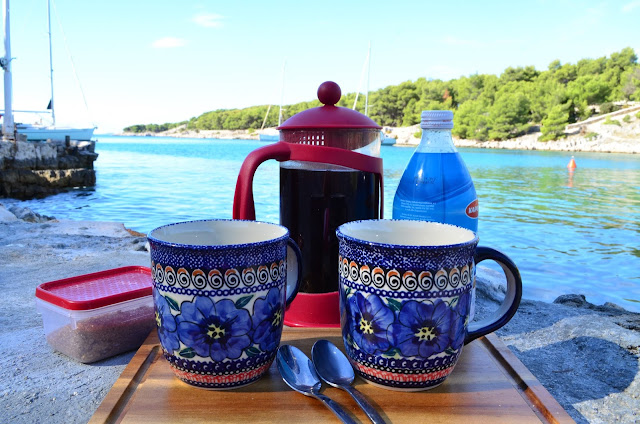 Especially sitting here in this absolutely breathtaking cove. Wow. It really is stunning. 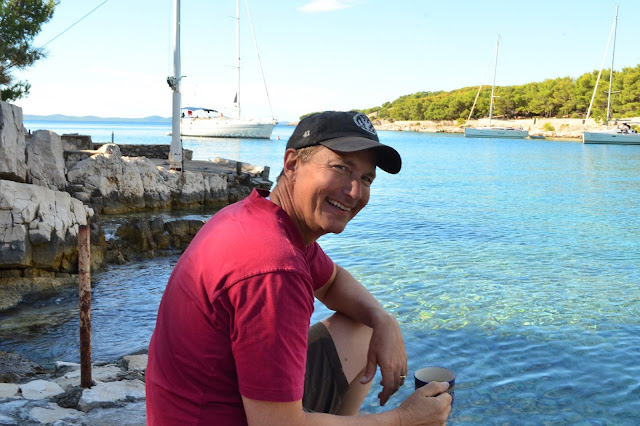 Though I had an interested little girl who thought she wanted what was in that cup (don't think she'd enjoy it like me), it just made my morning to sit there in the peaceful, serene cove and drink a cup of coffee with my husband. 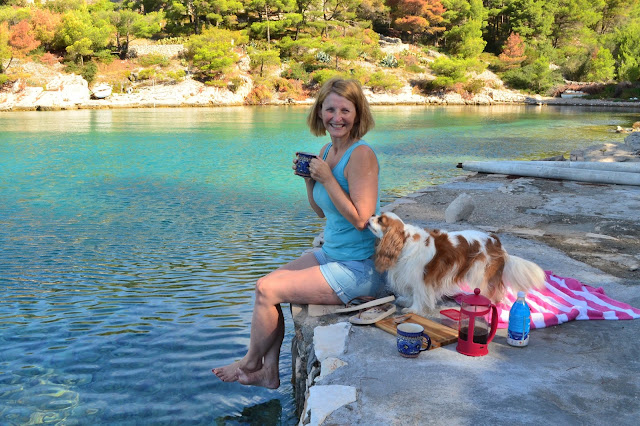 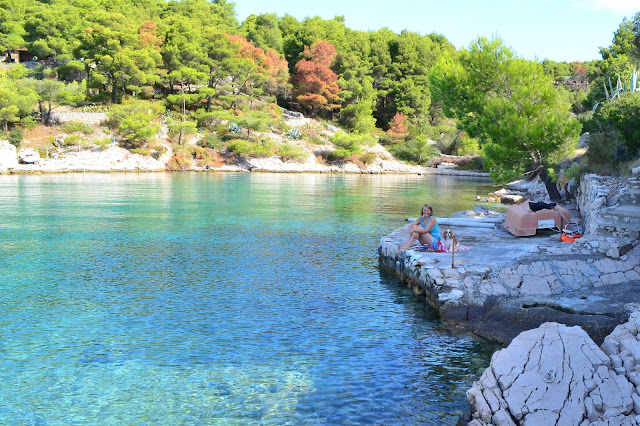 We stayed for a couple of hours. Talking. Dreaming. Thinking. Being. 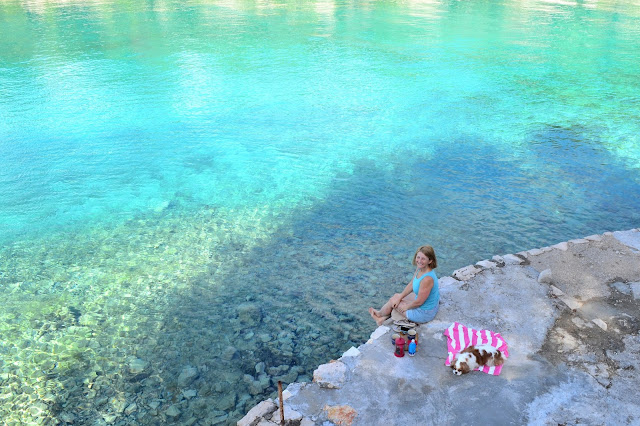 Just the sort of thing you'd do in The Secret Cove Cafe.

**By the way, I Googled the name and as far as I know, there is not another cafe like it. So for now, we're the only ones in business!

However, there is a Secret Cove Marina in British Columbia! :)
Posted by Unknown at 2:17 PM