A week ago, for his birthday, Dave and I hiked in to a monastery here on the island of Brač. It was such a spectacular view that we opted to go one more time before leaving the island.

But this time, we chose to enter from a different angle. And while it's hard to believe anything could top last week's hike, this one did!

We drove down the island, on a very bumpy, rocky road, twisting and turning on what most of the time was a one lane road (thankfully only encountering a few four wheelers along the way). With no guard rail on the edge, we glimpsed one gorgeous view after another.

When I uploaded the photos today, there were so many that spoke to me. I could probably just about write a blog post on each one! Have I mentioned how I like taking pictures?! HA! It sure does help me remember the beautiful things our eyes are seeing. 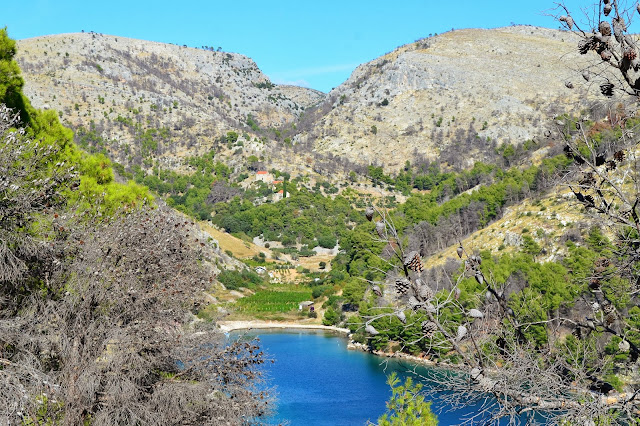 In 2010 there was a devastating fire on the island that burned sections of the island extensively. And yet the beauty of it remains. 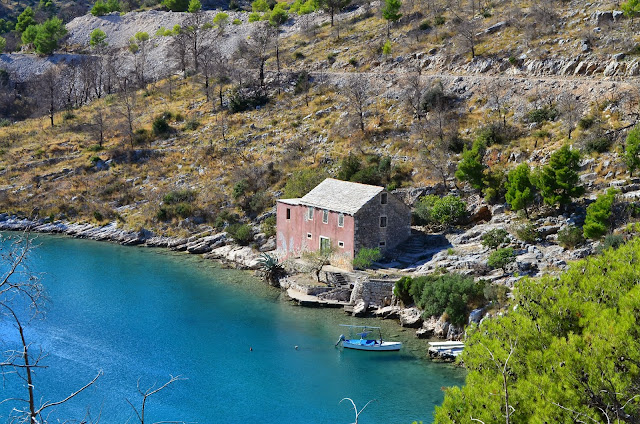 You can see how close the fire came to this, now abandoned, house on one of the coves we drove by. Did people live there up until the fire? You can't help but wonder. 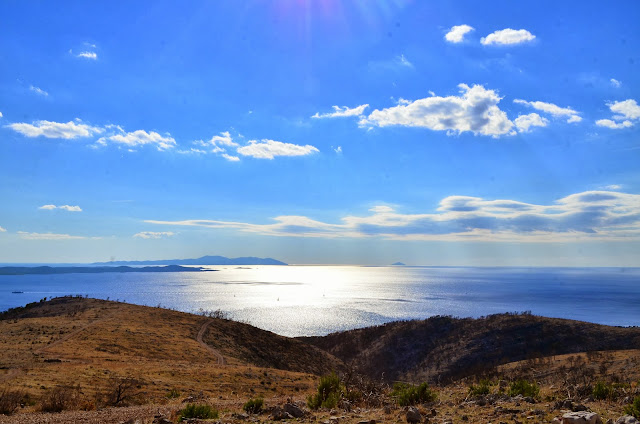 After about 40 minutes of driving, we came to the top of the ridge where the trail head into the monastery begins. We stood there in awe of how beautiful it was from that vantage point, looking out over Hvar, and the island of Vis in the distance.

It's a steep hike down into the valley, but totally doable. And worth it! I felt like I lost my breath as we looked across and saw this. Absolutely amazing from that perspective. It brings up all sorts of words from the Bible that it illustrates: refuge, stronghold, protected, hidden away, fortress. 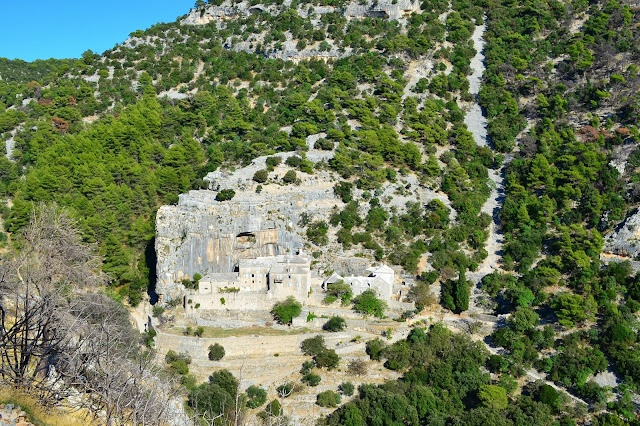 While the trail was doable for us, not so for Kaylee! She was a good hiker the other day, but yesterday she protested at going down steep grades on rocky, uneven surfaces. Good thing Dave's a willing dog carrier! 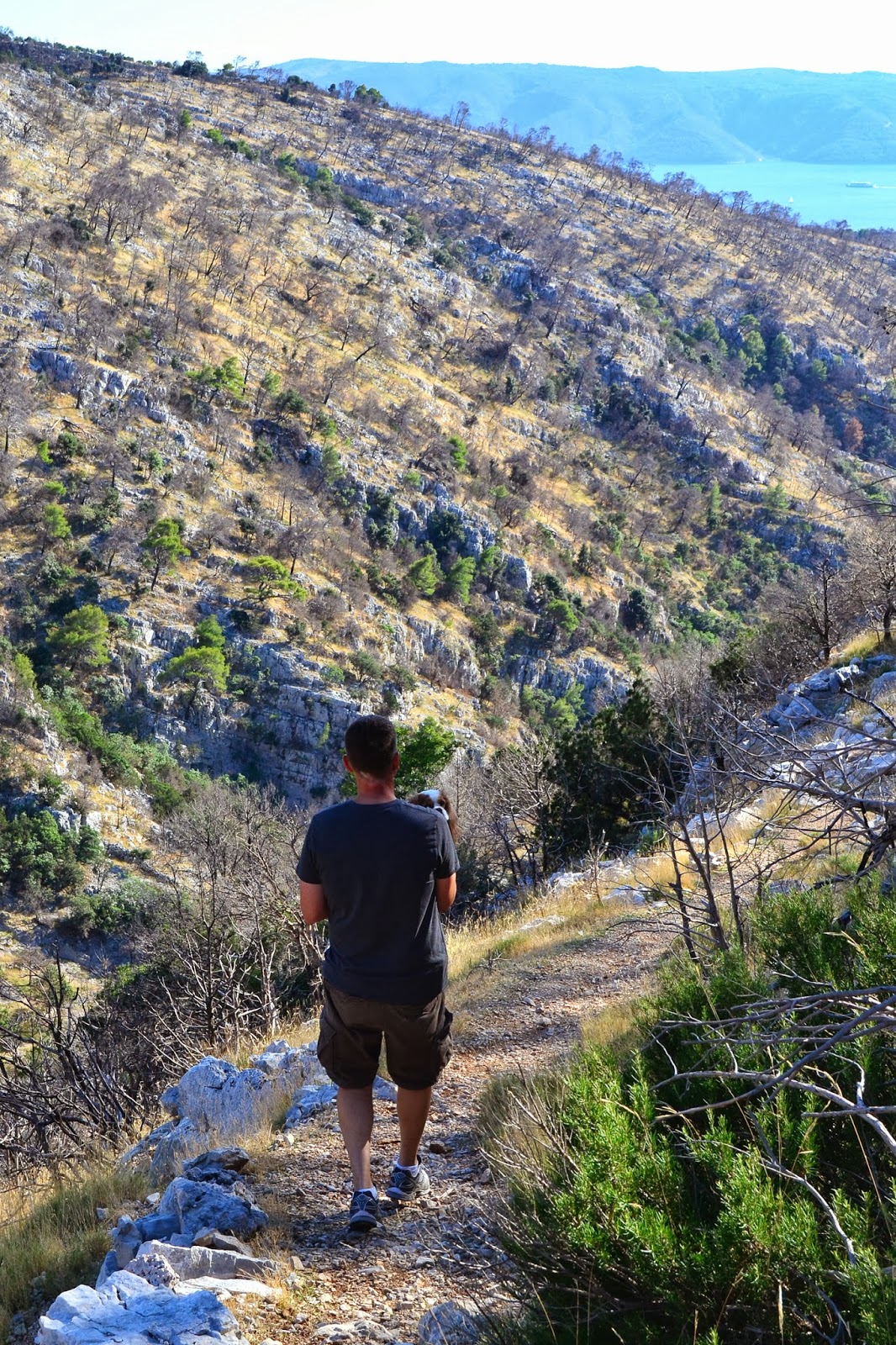 The monastery is open for tours six days a week. What we didn't know was who gives the tour. What a fascinating story that was!

The last monk died in 1963, after over 400 years of it being an active monastery. When he died, a man was given the job of caretaker, which he did for twenty years. And in 1983, a new caretaker took over. His son. Who is still the caretaker today, thirty years later! He was the one there giving tours yesterday.

And one other tidbit. All the monks, over those four hundred plus years, came from the same family! There were always three monks on site, with thirty workers there to assist them. At harvest time, over a hundred people came in as volunteers. They kept meticulous records so this is how they know what took place there through the years. 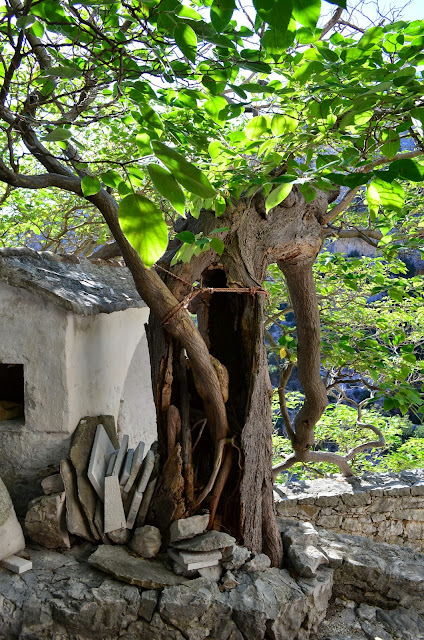 Do you see that tree? It's a tree, growing out of another tree! New coming out of the old. Surely there's a good illustration in there somewhere.

Just a ten minute walk from the monastery is where they kept bees for years and years. 237 hives, to be exact! Since Dave was once a beekeeper (in Colorado with his family), he was fascinated to see the remains of their hives. And to imagine what the sound must've been like when there were all those active hives! 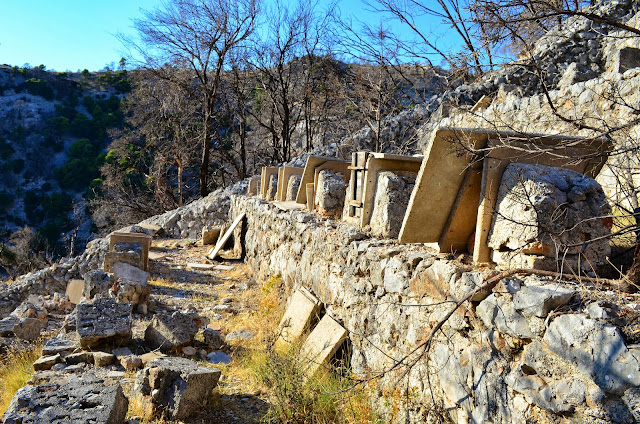 Picture taking wasn't allowed in the actual monastery, and neither were dogs! So Kaylee and I stayed out while Dave went in for a tour with the man who'd been giving tours for thirty years.

Since there wasn't anyone else there at the time, Dave had a private tour, which he loved, and was free to ask questions to his heart's content.

He said it was absolutely fascinating, and looked like time had stood still as almost everything is "as is" from 1963 when the last priest died.  Even down the barbells left in the room where the priest had last used them! The man giving the tour was proud to show those, saying how the priests liked to keep in shape and were "body builders"! 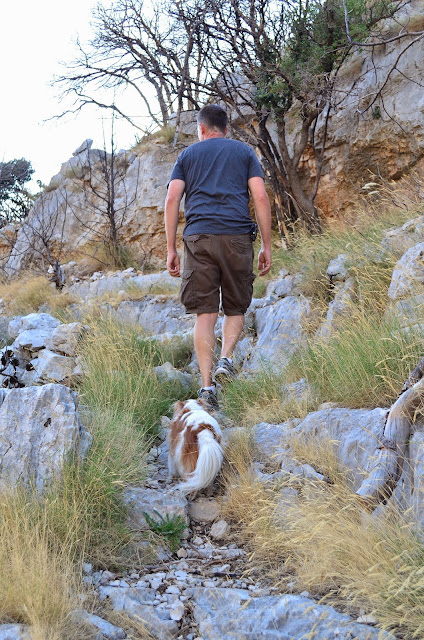 As we hiked back up (this time Kaylee was willing to go at it on her own!), we marveled at how this little community survived, and thrived, for so many years. What a sanctuary it must've been for those men, and even those who worked there, as they sought to do what they felt was the Lord's calling on their lives. 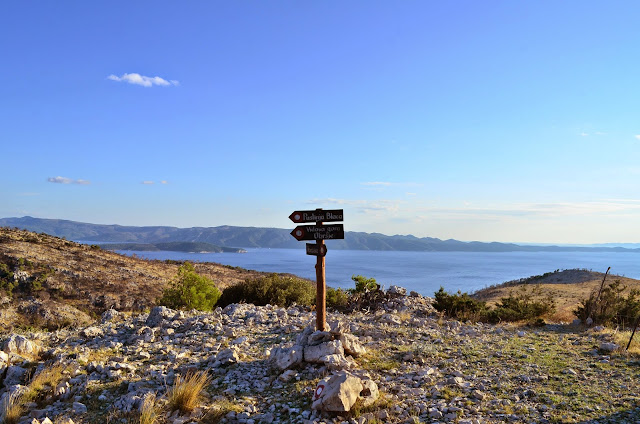 We resonate with that! We're seeking to do the same...live out His calling on our lives.
Posted by Unknown at 5:49 PM