Since Dave and I are "see and do" kinds of people, and love soaking in the atmosphere and sites of such a beautiful place, we decided on one last outing over to Hvar to finish up our sabbatical here in Croatia. 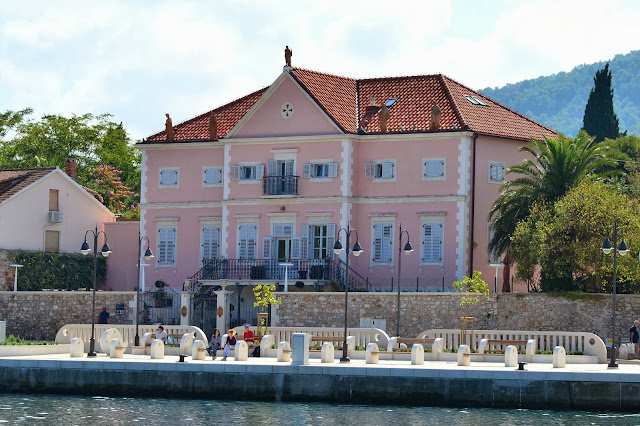 Although we've often been on Hvar, we've never spent any time in Stari Grad, other than to get off the ferry that docks there.

We didn't know what we were missing! 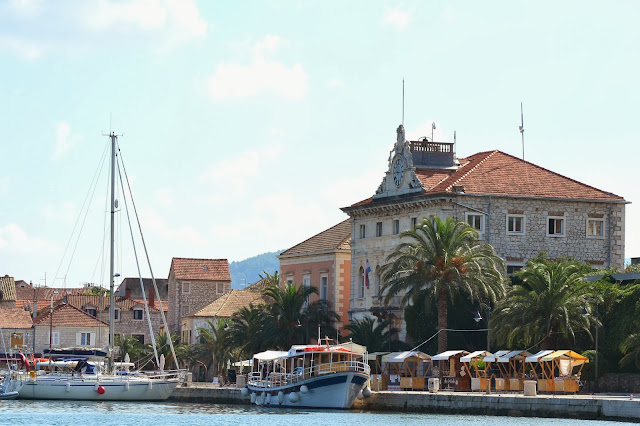 One of the oldest towns in all of Europe, it was first settled by the Greeks in 384 BC. Imagine that! 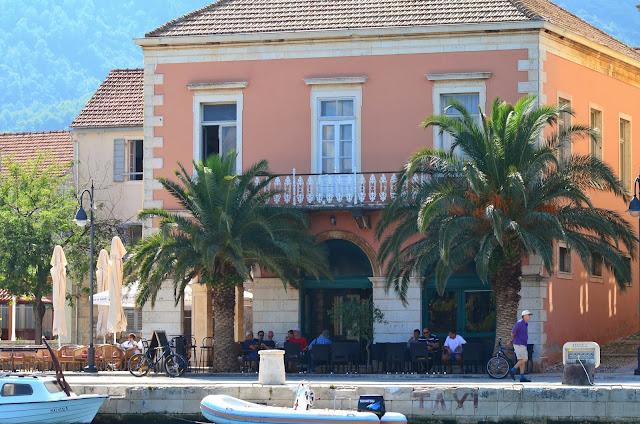 It's been under rule by the Roman Empire, the Slavs, the Venetian Republic, the Austrian Empire, and the Dalmatian Kingdom, which was part of the larger Austro-Hungarian Empire. It's certainly seen its share of rulers and leadership. 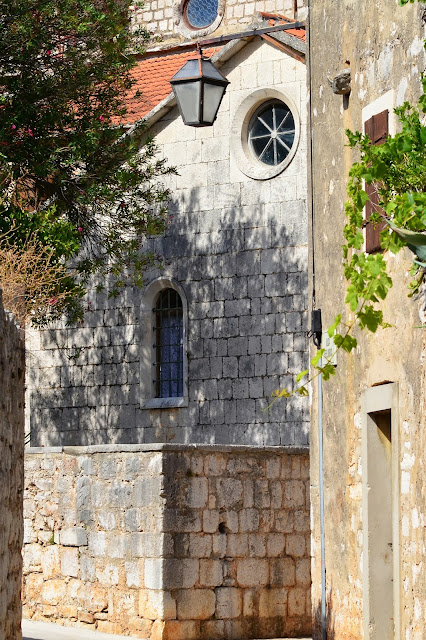 The city was almost completely destroyed by fire in the 16th century, but was rebuilt and is a beautiful city today that hearkens back to its roots in the past. 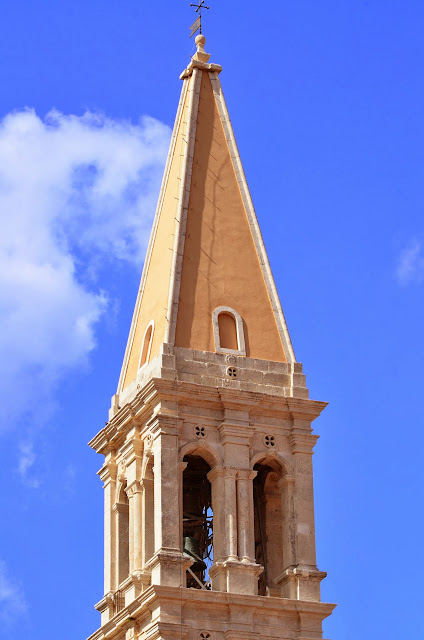 We wandered the back streets for hours, just soaking in the beauty. 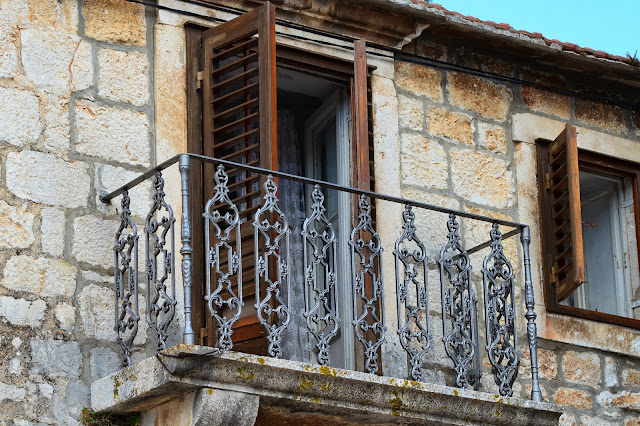 And sat for a while on the soft, well worn steps of one of the churches, enjoying local life as a few people passed by. 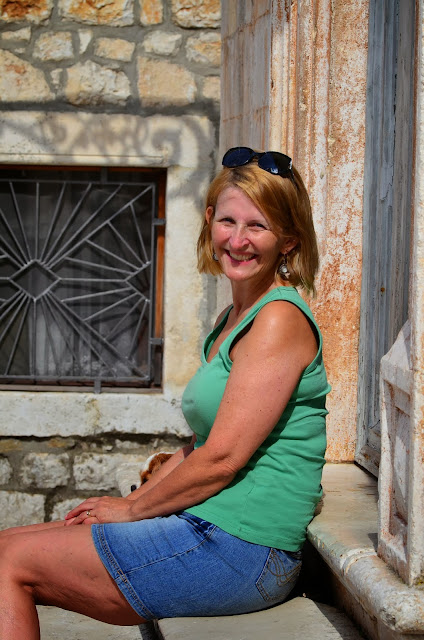 Just around the corner from this old square was a preschool. We could hear the sounds of children floating through the air as we sat on the steps, and then were treated to this sight as a grandpa and his granddaughter wandered in.

We chuckled at the long route she was taking as they, most likely, were headed for home. She skipped, jumped, wandered and stopped to observe the tiniest of things, taking well over ten minutes to walk through this square, which would normally take all of thirty seconds!  He commented to us as they rounded the corner, "She's non-stop from morning til night like this. I'm too old to keep up with her!" 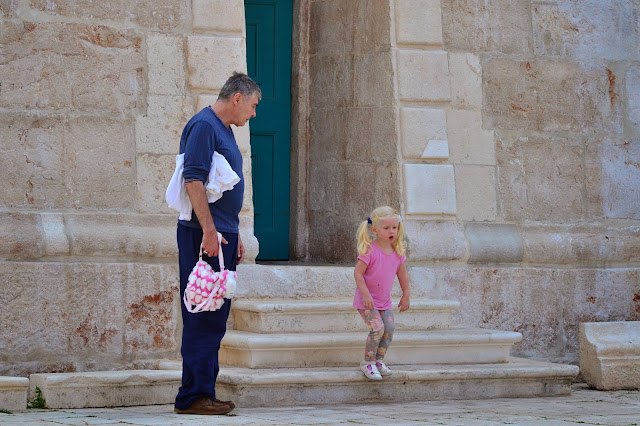 Around every corner there was a treasure to take in. Couldn't help but wonder who was being waited on so they could sit down at that table together and enjoy the contents of the pretty pitcher. 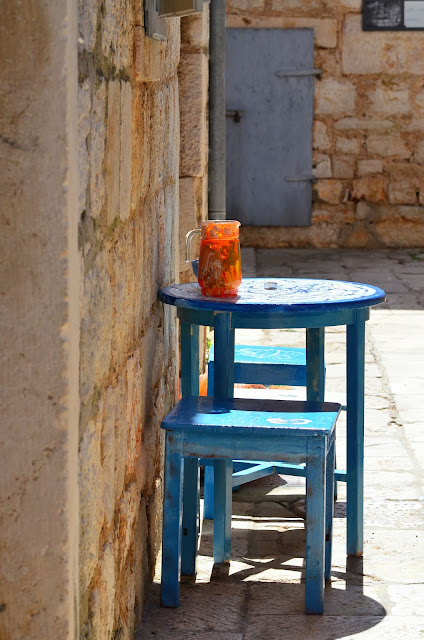 There were so many nooks and crannies throughout the town, which has a population of 2800, though you would hardly have known it yesterday as we walked alone through most of the streets. 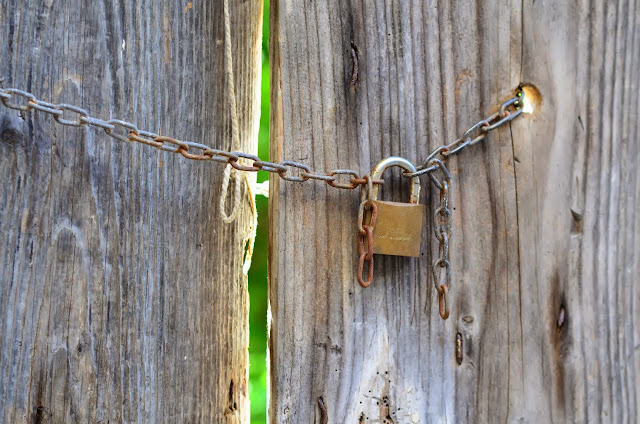 Just to the right of that old gate with the padlock, was a wide open door into its garden. And one of hundreds of pomegranate trees we saw throughout the town, just waiting to be picked. 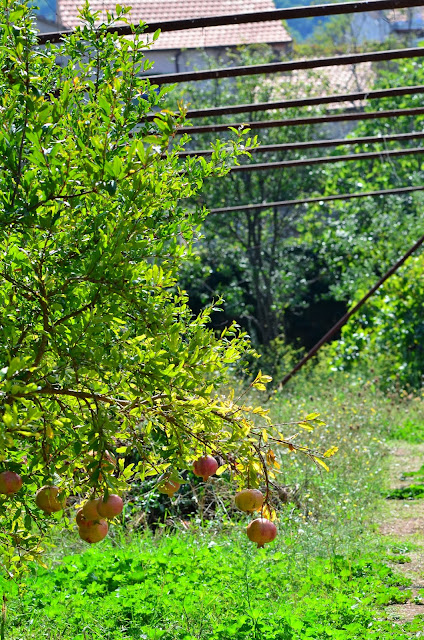 Since that was obviously someone's garden, we of course didn't pick! But at the edge of town, in an abandoned field, we found a tree where we could. Such amazing fruit! 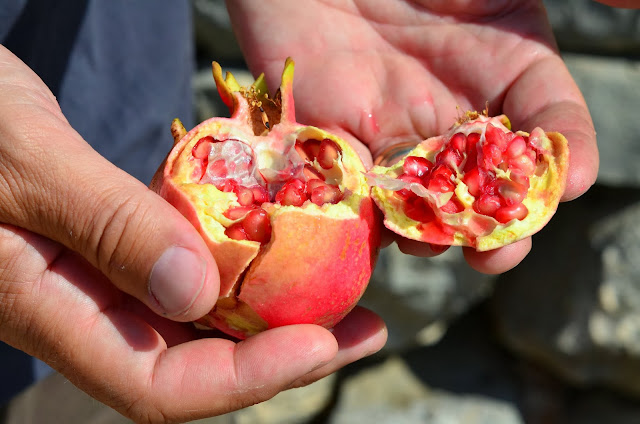 We wandered back into town, seeing only a few people here and there in these winding, cobble-stoned streets. 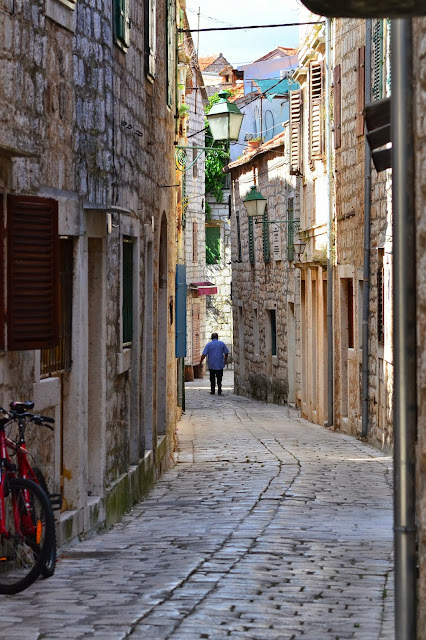 With not another person in sight, and not even a sound except for the chirping birds overhead and church bells ringing in the distance, sat this woman. As we passed by, she didn't even move. It almost looked like she just elegantly sits there day after day, year after year, giving people like us a beautiful site to photograph!

Don't you wonder what her story is. 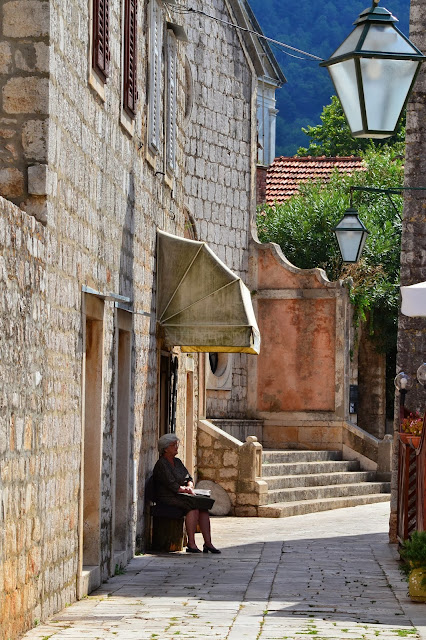 Back out onto the waterfront, there is no lack of cafes and restaurants to enjoy. Wish we had time to try them all out and find out their specialties! 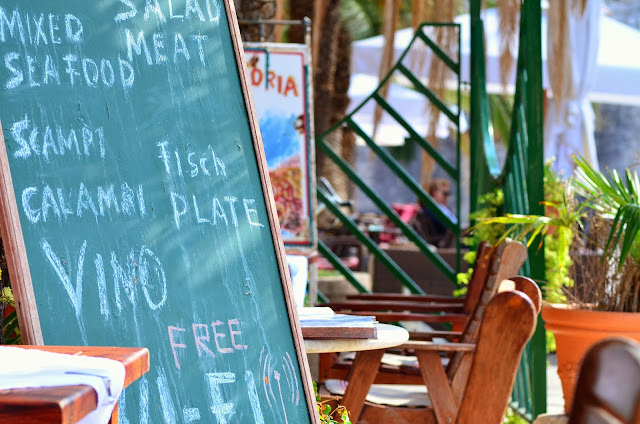 We headed over to the other side of the harbor, walking as far as we could on that path, much to Kaylee's delight. She's a great walker, except for every time a local dog came by (there are a lot of sweet, but wandering dogs there) who wanted to check her out. Then it was "Dad???"

He was only too happen to oblige! 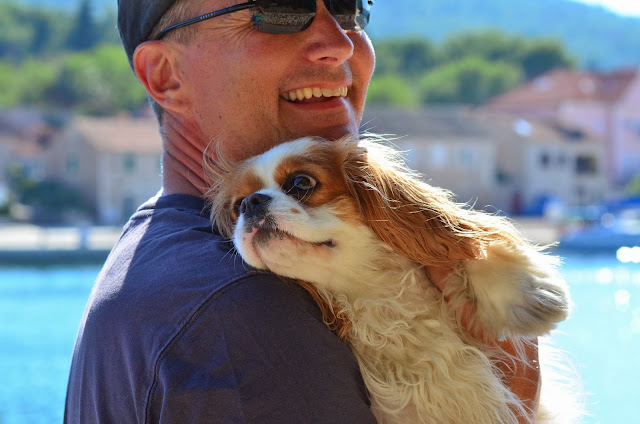 This church, one of at least six we saw in the town, was built in the 13th-14th century, down at the water's edge. 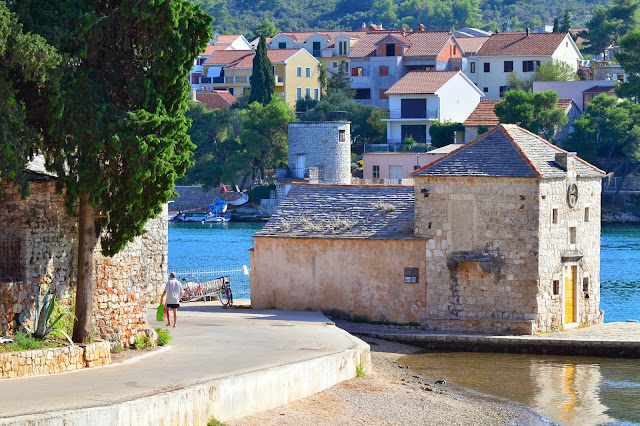 After hours of walking, we stopped at this cafe for coffee and ice cream, always a good afternoon pick-me-up! 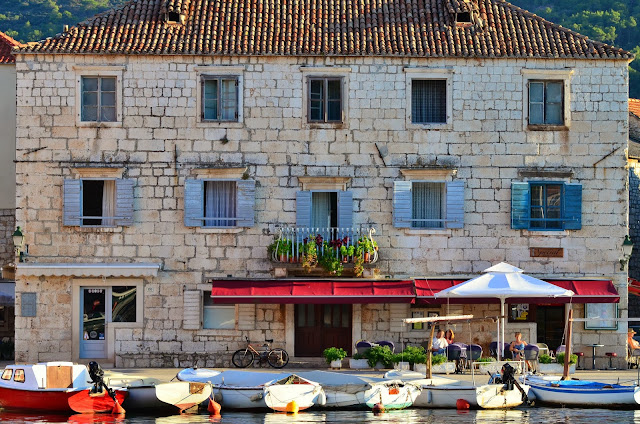 Then, with one last glimpse of Stari Grad, it was time to head back to Brač. 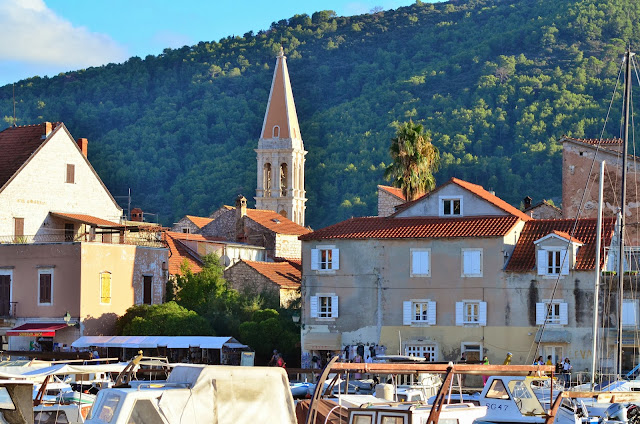 Even this last day was nourishing and refreshing to us. I felt so thankful for every last bit of beauty we saw.

We feel deeply renewed and ready to head on to the next months of our time in the States as we begin writing, as well as visiting friends, family, supporters and our churches. 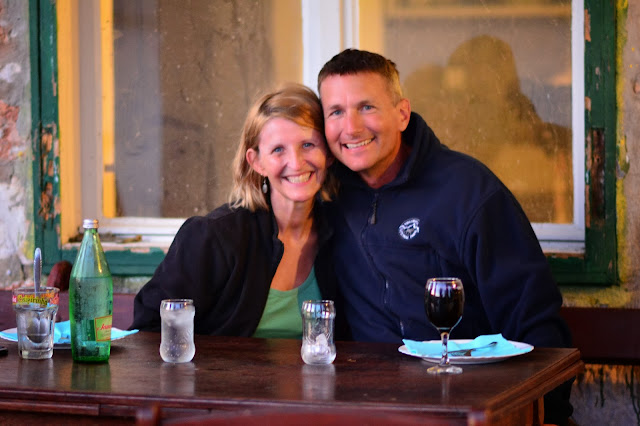 Thankful to be on this journey together!
Posted by Unknown at 12:11 PM