Not Short on Adventure

After spending the night in a cove on Peljesac with free moorings (free that is, if you eat at their restaurant, which, thankfully turned out to be awesome. Best meal of the trip!), we left at 6 AM to head back up the coast to the house we're staying at, hoping to be there by evening.
But, those were our plans! It didn't quite turn out like we thought.
Wind was, once again, a factor and we were delayed not just once, but twice today because of it.
The first time we found a town on Mljet where we were able to wait it out for a few hours at a great cafe.
The second time we had to seek shelter in this rather deserted looking cove. 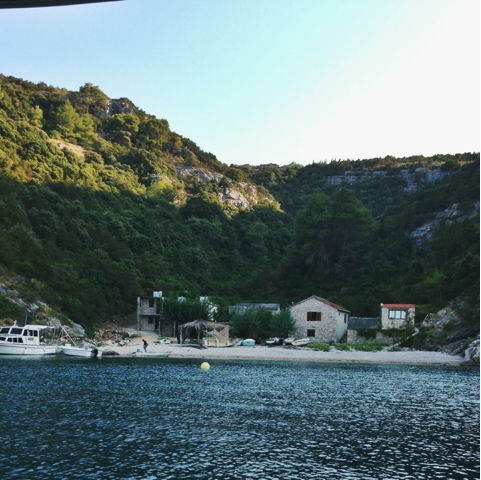 After a half hour of bobbing around there, we did see a guy, so it wasn't quite as deserted as we thought. But it kind of felt like we were in the middle of nowhere!
Dave is a pro now at checking the website that tells about the wind in this corner of the world, and believe it or not, had wifi in this crazy spot where we were waiting! He had known the wind was coming, but was hoping we'd beat it.
We didn't. But waiting in this cove for an hour and a half turned out to be a very peaceful part of our day. 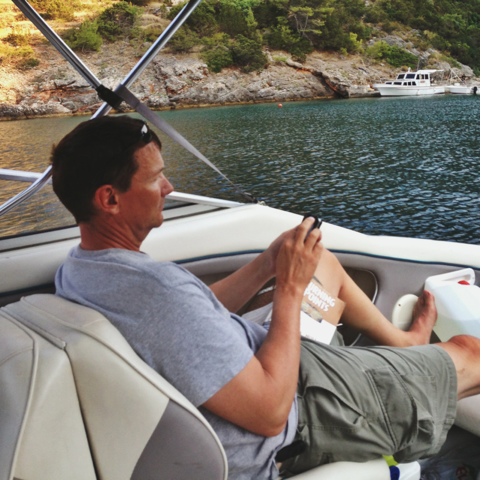 Sometimes I wish I knew what was going through our dog's mind! Not once has she gotten up on the backseat of the boat by herself, even though it's been completely accessible to her this whole trip. And believe me, there's not a whole lot of space on the boat so it would've made sense that she would have by now.
But it wasn't until we were in that cove, just waiting, that she finally did. Glad I snapped this on my phone, even though I was laughing and could hardly keep the phone still to take the picture (see below).
What was she thinking at that moment?!
I'm writing this blog post on my phone, in the dark, from the harbor of Jelsa where we finally made it to this evening. It's calm, quiet, and pleasant to be here - especially because this is a town we are familiar with from previous vacations. So it almost feels like we're home!
Hopefully we will make it to the other place we are calling "home" tomorrow!
We are definitely not short on adventure these days! 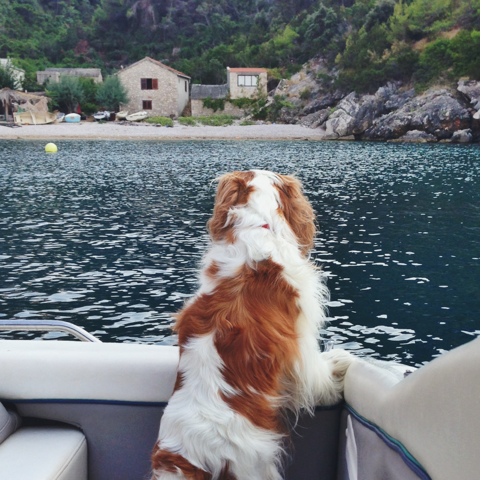