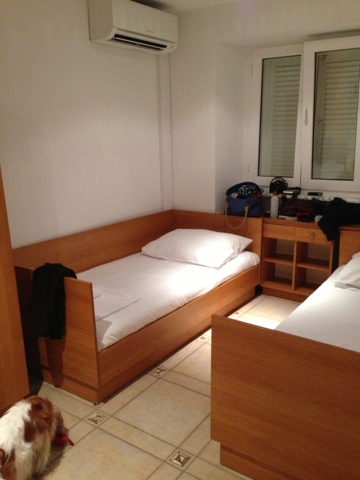 Our trip continues to be adventure on top of adventure!
We woke up yesterday morning in Jelsa to a boat that wouldn't start. Oh but that was after a wonderful breakfast on the delightful square there, and a sweet surprise that I'll write about another day.
It took Dave three hours, literally toiling in the beating sun, as he worked on the electrical connections which had corroded (that's what salty water does for ya!).
We missed our window of good traveling weather back over to the house we are staying at on Brac, but were able to slowly make our way, through wind and waves, to the town of Bol on that island.
Getting to the house we are staying at on this island wasn't as easy.
Since this town has the only marina on the whole trip that requires you to pay to stay in it, Dave moored the boat out on a buoy farther away, and swam into town where we enjoyed dinner and a nice walk on the long promenade.
Finally by 7 PM it seemed the wind had died down enough for us to make the trip back to our house, just a half hour boat ride away.
In good weather, that is.
After swimming out to get the boat again (all a great adventure to Dave, I might add!), he picked Kaylee and I up at a dock and we headed out.
The sunset was truly one of the most magnificent I have ever seen in my life. It just went on and on, deeper and deeper in color as the minutes ticked by. Glory if I've ever seen it.
But also, the waves got bigger and bigger the farther we went down the coast.
I don't mind telling you that I was afraid. It's so strange to be completely captivated by beauty, and afraid all at the same time. There's got to be a lesson in that somewhere, but that's for another day.
We pressed on for fifty minutes, all the while the waves were getting bigger and bigger, and it was getting darker and darker.
My heart was in my throat, as I sat quietly holding Kaylee while Dave fought through those waves. The lyrics "...and when the oceans rage, I don't have to be afraid. Because I know that you love me and your love never fails" passed through my mind over and over.
Finally it was clear. Fight the waves and lose, or turn around and go with them, back to safety. Again, more lessons to write on another day.
Riding the waves with the wind, we were back in Bol within fifteen minutes. Just minutes before it had seemed we were all alone in the depths of the ocean!
We moored in the very wavy marina and waited to see if the wind died down so we could spend the night in the boat. Dave got me off while we waited, and treated me to two scoops of "the best ice cream in Bol" (that's what the sign said!) right in front of where we were tied up on the riva. And they were right! Gelato never tasted so good. But then again, on the heels of what we had just been through, anything probably would've tasted good.
By 10 PM, it was apparent we (or rather, I) would not make it spending the night in the rocking boat. Without even asking, Dave set off to see if there was "room in the Inn" for us somewhere.
Twenty minutes later, we were in a room. Nothing more than two beds and a sink. But it was cheap and the beds were not going to be rocking and rolling in the night.
And nothing could have said "I love you" more than that room and those two beds! Dave's a good man who definitely loves his wife.
Dave went off to moor the boat again outside the marina - no point in paying for a room AND a spot at the marina. What a guy! He was even up in the night going out to check on the boat when he woke up hearing the wind howl. I never heard him. Was sleeping like...well, a happy, content wife!
It's morning now. We slept long, have been for a walk, had coffee and breakfast at yet another delightful outdoor cafe. And we are still waiting for the wind to die down.
But I am feeling loved, cared for, safe and protected.
It's a very good day.
Posted by Unknown at 11:09 AM