Even with the time change it was an early morning for us. 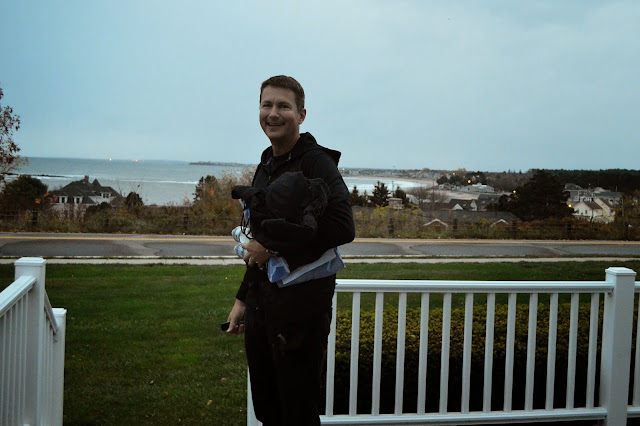 And a cold one! There were actually snowflakes falling as we drove to Manchester at 6 this morning, on our way to the half marathon that Dave was running in today. 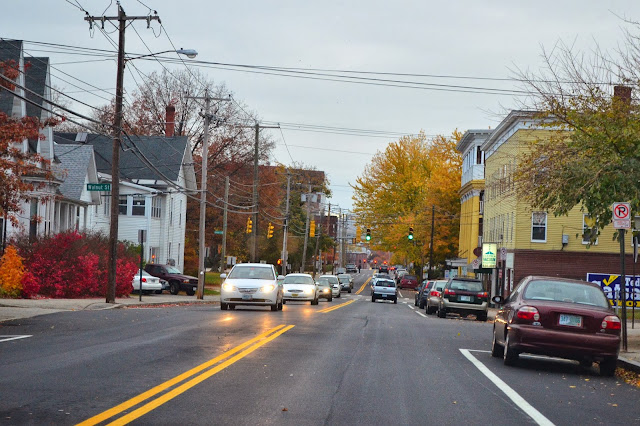 By the time we got into the city, it was a drizzle, with a cold wind blowing. Glad the Radisson let us all hang out inside until the start of the race. 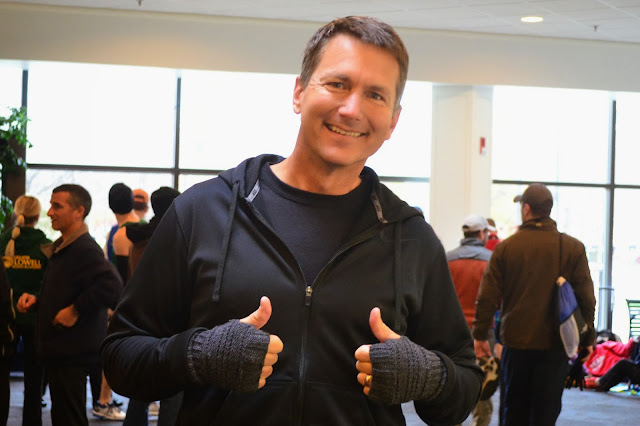 Because once we were outside it was a super wintry day.

I was completely bundled up, while Dave and the rest of the runners were preparing to spend at least a couple of hours out there in that chilly weather. 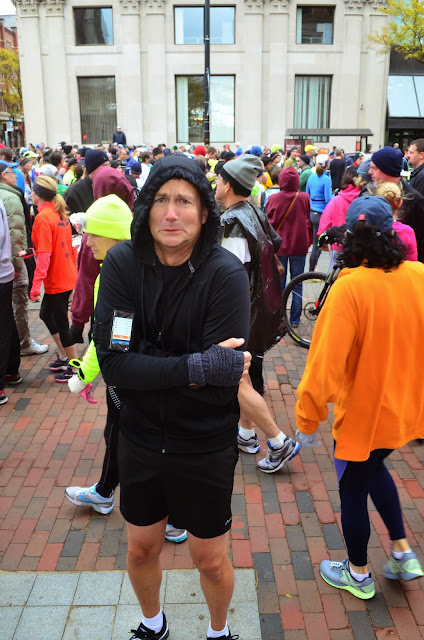 I was clicking pictures as the announcer was introducing people, and then all of a sudden, over the loudspeaker a woman started singing the National Anthem. I was happily surprised to see people being so respectful, but couldn't figure out why they were all looking "up". 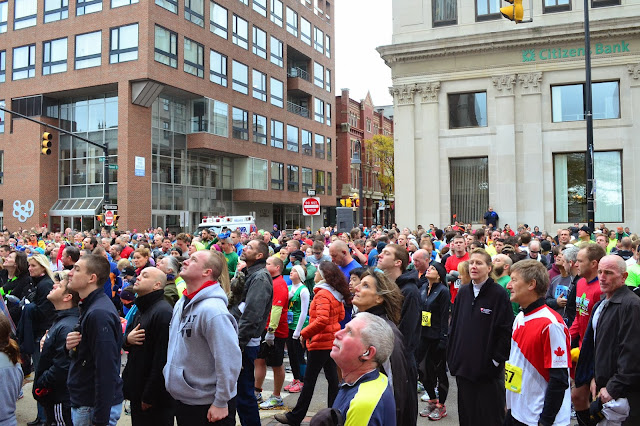 Everyone seemed to know what was up there except for me.

Honestly, I had  no idea what it was until I turned my head too and saw it: the American flag WAY up there! Guess I've been gone a little too long to remember that people here in the States still give respect to the flag. 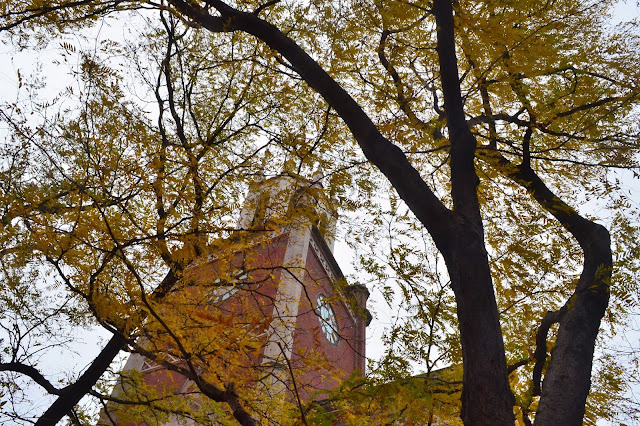 There was a lot of cheering after that, some loud music, and then the starter gun to get that race on its way!

Can you see Dave there in the crowd? 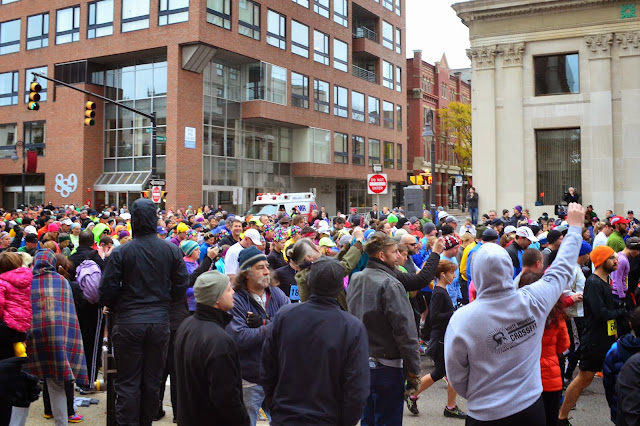 Though I'd planned to walk through the city to see Dave at various points, I quickly realized that was not going to be possible for two reasons: it was COLD, and there are a LOT of hills in Manchester. Whew. I'm glad I was not running them today.

I felt pretty proud of myself for navigating a city I'd only been in yesterday, and that was only to go downtown to get Dave's race packet. It's amazing what a GPS can do for you! I made it here, parked and walked over to that street as fast as I could. 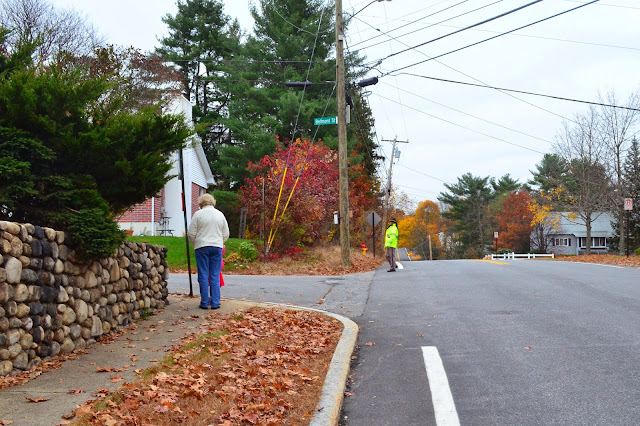 And I was rewarded by seeing the front runners of the race! The guy with the yellow racer's number is running the marathon, while the other three are doing the half. All of them were FLYING down that road. 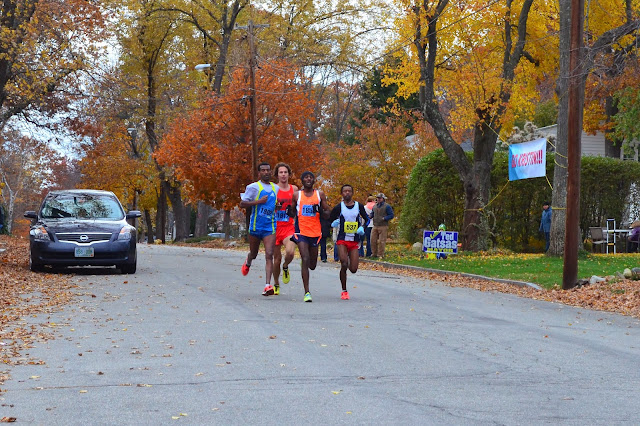 About ten minutes later, these three women came by. They were running hard too.

See the sign in the back? That's the home of a woman who was running the race, and her neighborhood was having a party to cheer for her! Just after I took this photo they called me over and gave me coffee and asked if I wanted breakfast!

It about made me cry! I was so cold by this time I could hardly take it. Coffee never tasted so good, and a big cup of it warmed me to my toes while I waited to see Dave come running by. 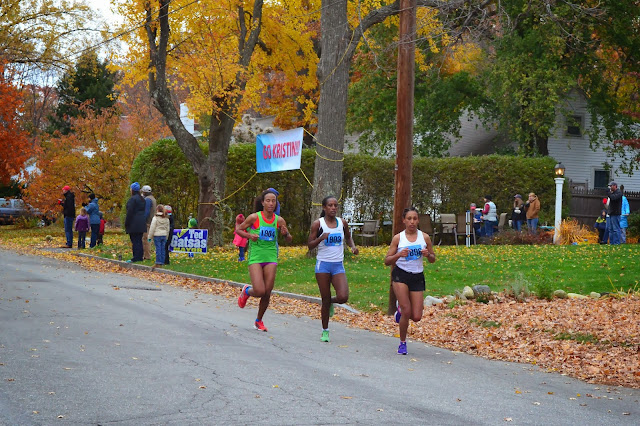 I remember when I ran the half marathon four years ago and was SO happy to see my kids along the route, taking photos. It was fun being the one to do that for Dave, especially since I was his only fan for the day! 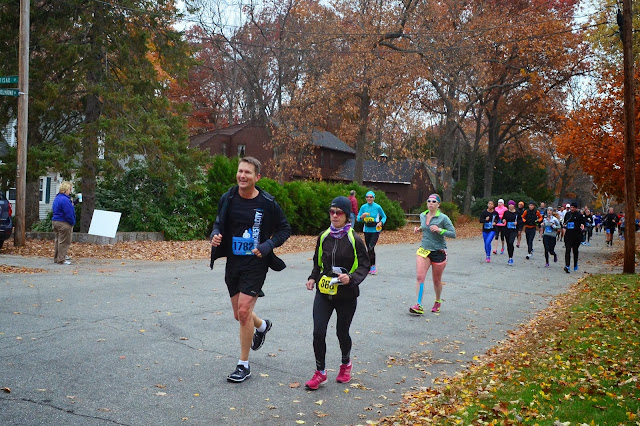 I don't know if you can tell, but those hills just went on and on today for those runners. I'm glad the course I ran years ago was a flat one! 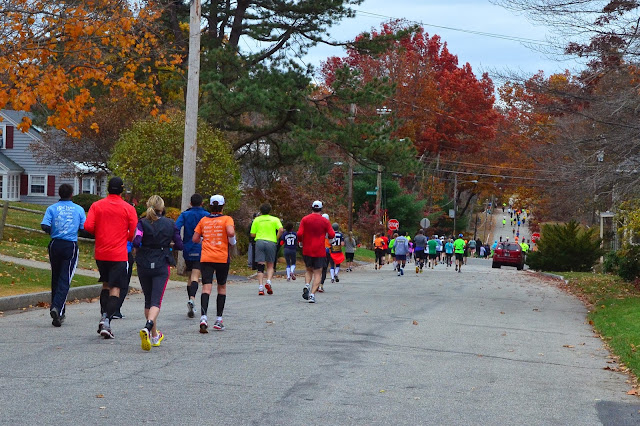 I just missed Dave at this turn, but there he is! He didn't see me, but I saw him. That counts for something! 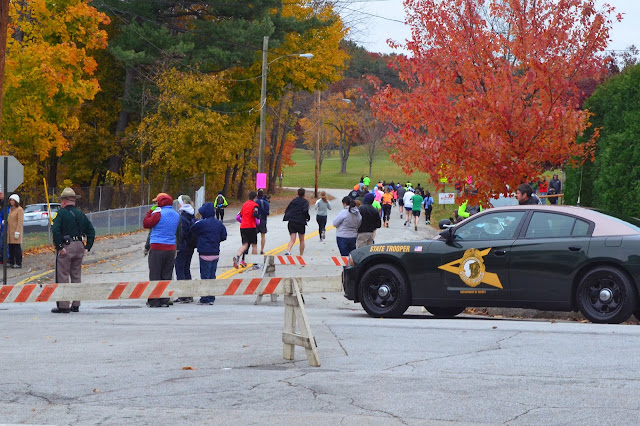 I headed to one more spot in hopes that I'd see him, and I did! He was getting near the end here, but still had a smile on his face. 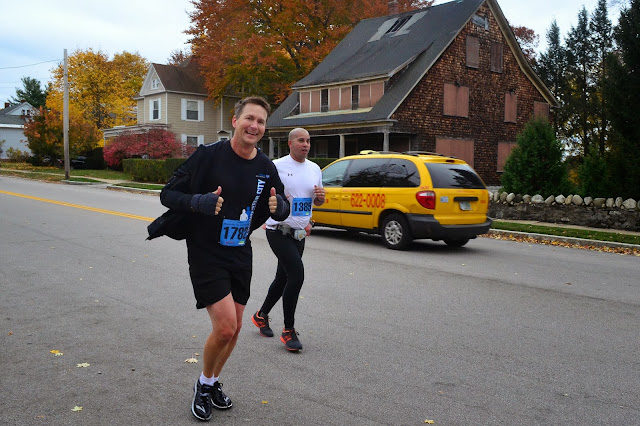 After that it was time to head for the finish line, park and hope to see him there. Thankfully found a spot by this pretty park and literally snapped this as I was hurrying by. Oh those leaves! Will I ever get over having been in New England for its gorgeous fall?? 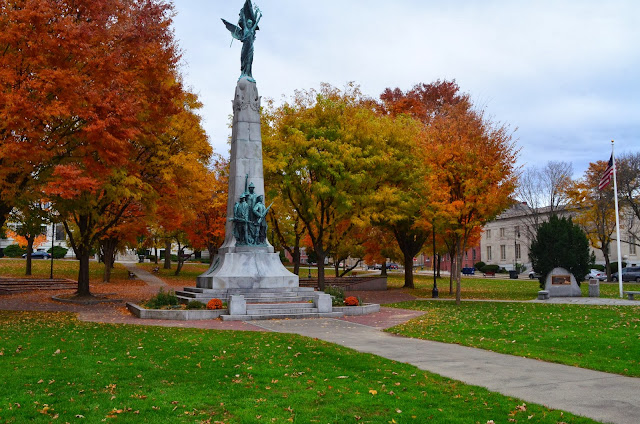 I missed Dave crossing the finish line by about five minutes, but still met up with him right near there. It was so thrilling to see him, congratulate him and tell him, "GREAT JOB HONEY!" 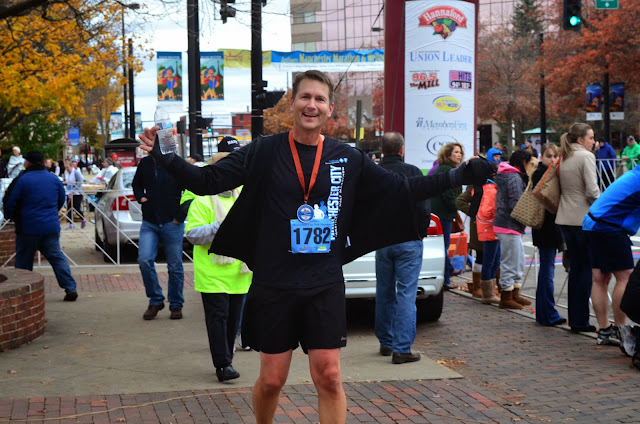 Just a few minutes after seeing him, the winner of the marathon crossed the line right beside where we were standing. It was the same guy I'd seen at the first spot where I'd gone to take photos of Dave. Pretty cool that I saw him there, and that Dave got a shot with him afterward! 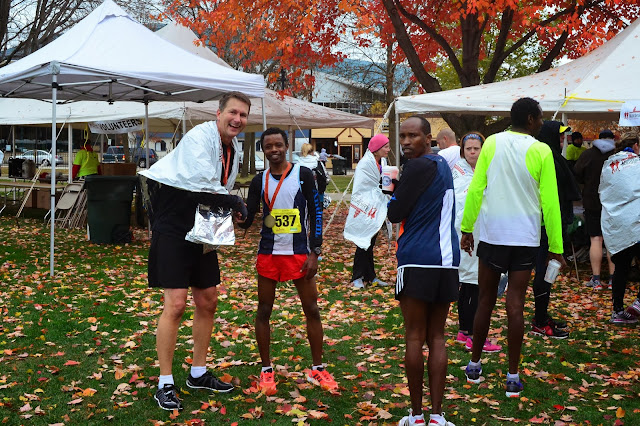 But you know who I was most proud of, right?! Dave only decided to run this race last week-end! What a guy!

He ran the race in 2:09, which is not bad for a guy who hasn't run a race since he had heart surgery three years ago! 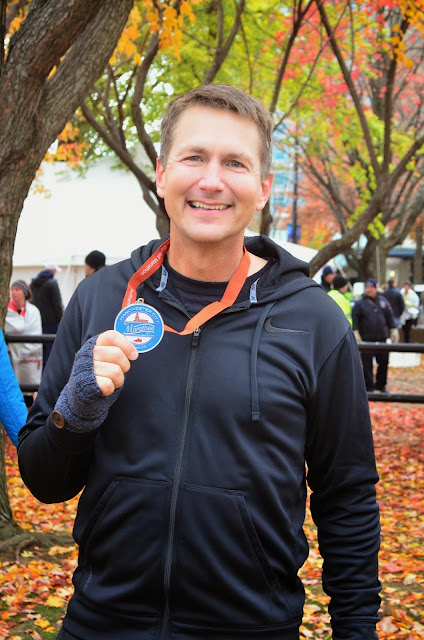 Great morning in Manchester, and a very fun memory of our time here in New England.
Posted by Unknown at 8:00 PM