It started with an email on Tuesday night, while I was still with my parents in Eugene.

Nothing like a little excitement less than 12 hours before you're supposed to fly!

I called United's Customer Service immediately, trying to get re-booked on something that would get me to Chicago in time to meet up with Dave, flying from Denver, for our 8 PM flight to Portland, Maine.

After 45 minutes on the phone, which the agent apologized for profusely, she gave me a solution. 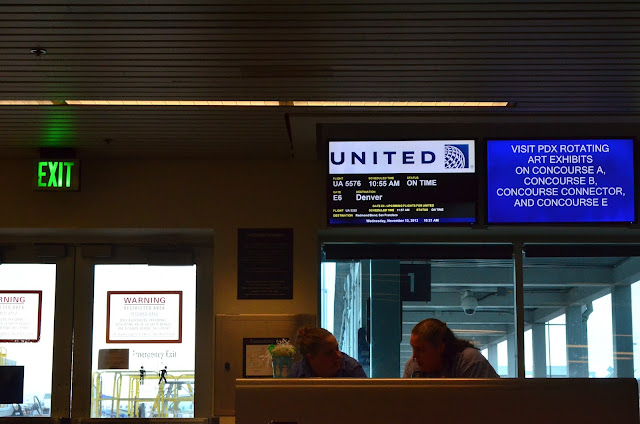 "If you don't mind a 5:45 AM flight out of Eugene to Portland, I can get you on a flight from there to Denver and you can meet up with your hubby!"

Early in our phone call I'd told her that I needed to get to Chicago in time to meet up with my husband who was flying out of Denver. Jokingly I said, "Could you route me through Denver so I could surprise him there?" She'd told me no.

I don't know what changed her mind, or what went on all those minutes while I sat on hold, listening to the United theme song play. But it was good news in the end, that's for sure. 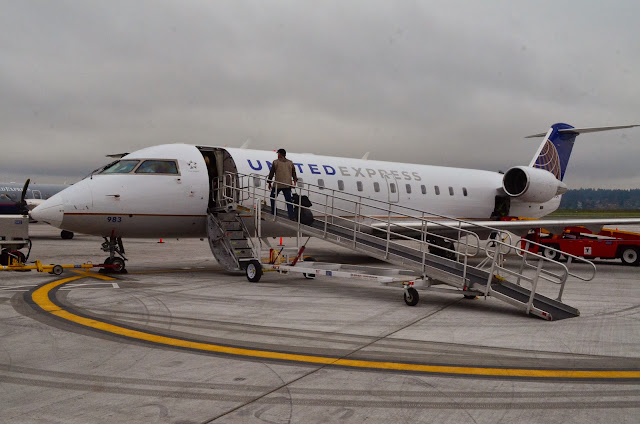 I was giggling to myself as I got on the flight, and for the whole two hours of it, thinking about Dave's reaction when I showed up at his gate. 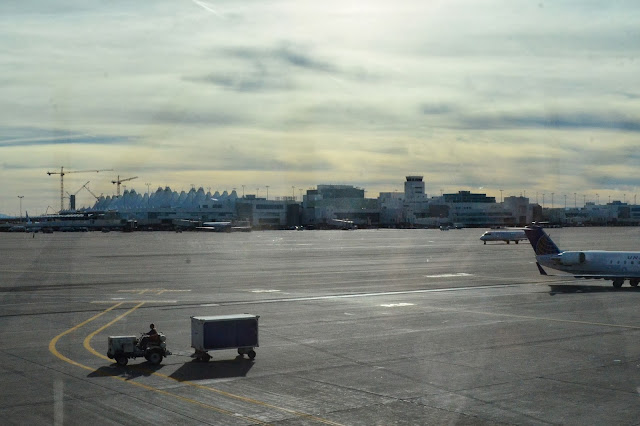 It was surreal to actually fly into Denver, knowing I was just minutes away from surprising Dave.

Not knowing what time he would get dropped off at the airport by his mom and dad, I rushed to the gate so I'd be there when he arrived. 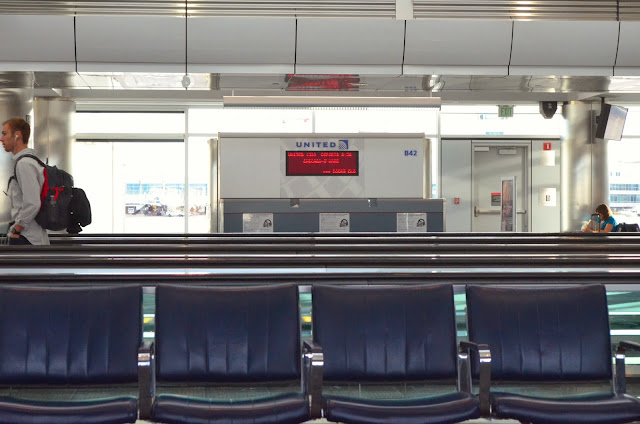 Good thing I did! As I sat in the gate across from B42 watching for him, Dave walked up just minutes later.

Time to make this surprise happen!

Sneaking up from behind, I started just clicking the camera as I walked around the side in order to end up in front of him. He has no idea what's about to happen! 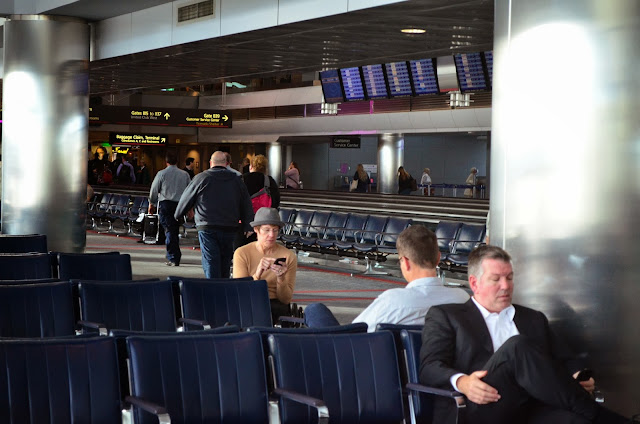 By this time, I'm within just one step from him, and he hasn't looked up yet! 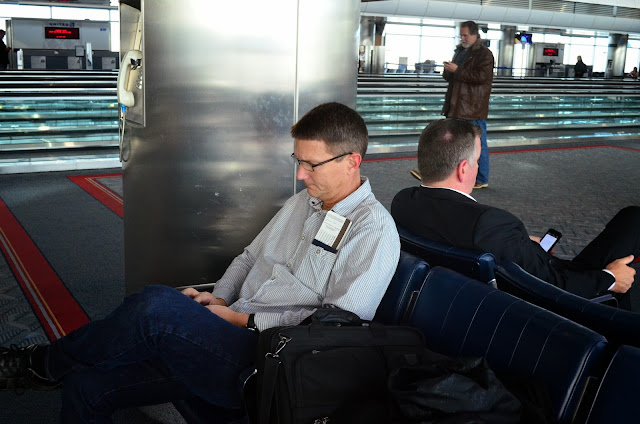 He then looks up, but doesn't yet recognize who it was, since I'm behind the camera.

I started laughing and couldn't keep clicking the camera anymore...it was time to greet him! 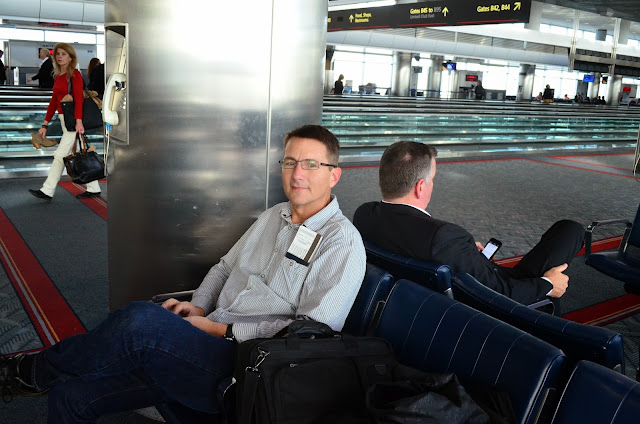 "How did you get here??????!!!!" he asked as I pulled the camera away from my face. Laughing out loud by now, I started to explain what had happened.

Oh so fun to get his hug afterward as he stood up to greet me! 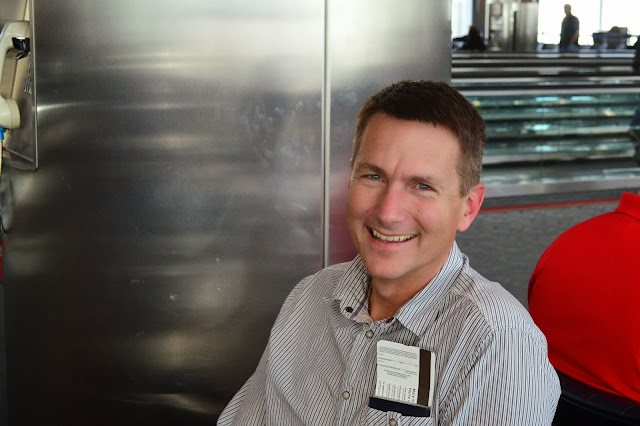 I think we must've disturbed the businessman that was sitting behind Dave when I came from behind to greet him. He was up and out of there immediately, and another man took his place right after that.

Maybe he wanted to give us privacy, or maybe he was just a little freaked out by all the commotion!

In any case, it sure was fun, and funny, being able to pull off a surprise like that.

The extra blessing in the cancellation?

A three hour layover in Portland early that morning. My sweet, best friend of 34 years got up and met me at the airport at 7 AM for breakfast! I wasn't even supposed to fly through Portland that day, so that truly was a blessing. 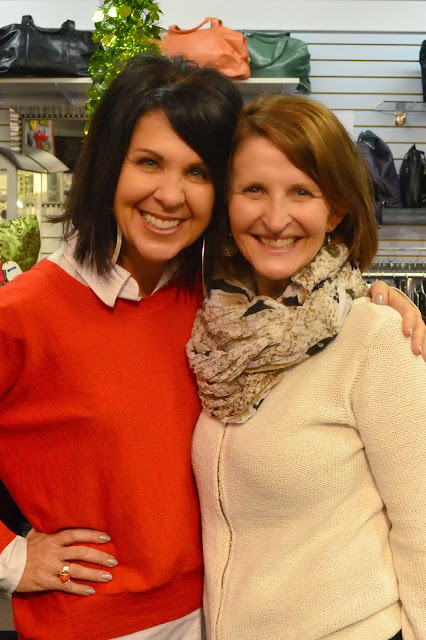 What a great day of surprises all the way around!
Posted by Unknown at 5:50 PM