I arrived in Vsetín this morning, the city where Dave has been staying since Tuesday. 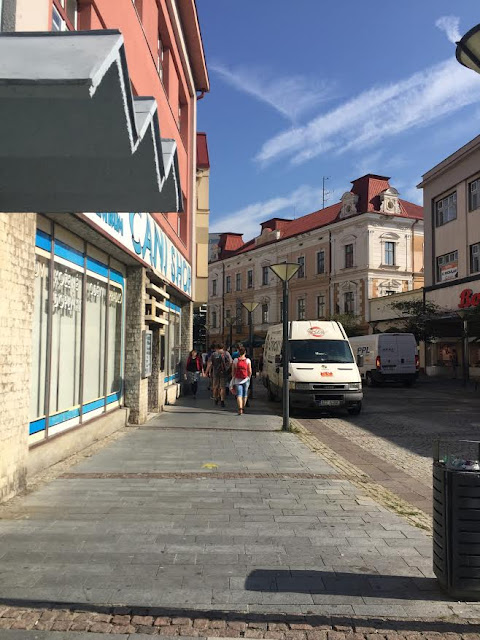 Groups of people were already making their way towards the main square, in anticipation of the morning program at Festival United.


In its sixth year, Festival United's vision is to reach the young generation for Christ here in the Czech Republic, through a multi-genre festival. This includes bands, seminars, workshops, places to hang out, counseling centers, booths, activities, and a main program in the morning and evening.

For the past five years that main program has taken place in the cultural house downtown. But with over 3500 young people attending last year, and more expected this year, they could no longer fit in that space.

After discussions with the mayor of Vsetín, they were allowed to bring those sessions outside into the main town square. 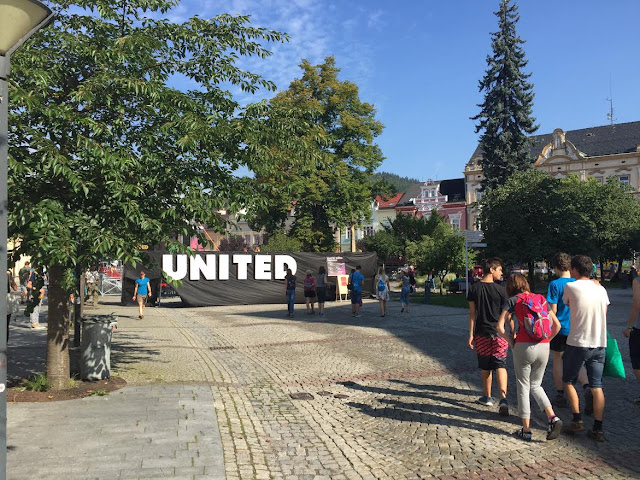 A stage had to be prepared and set up. And all the logistical aspects had to be thought through. I'm sure it was months and months of work to get ready for this week! 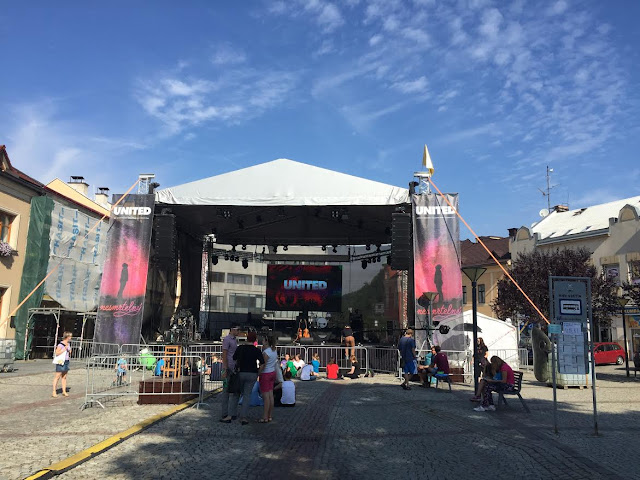 Slowly the square began to fill with people this morning: some on bleachers that were set up, others on chairs, but most of them on the ground throughout the square. 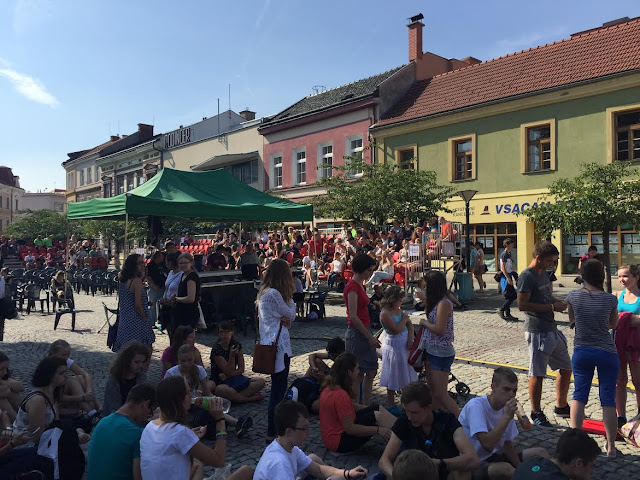 While it's not a perfect picture, at least my iPhone has the "pano" option so you can get a small feel of what it was like!

A wonderful music group opened the morning session with worship. Although most of you won't understand the words, you can go HERE for a video clip of a song from the Adam Bubík band. I really enjoyed them! 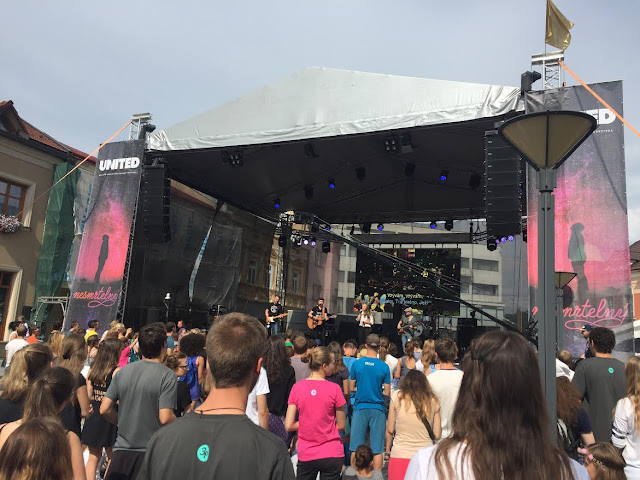 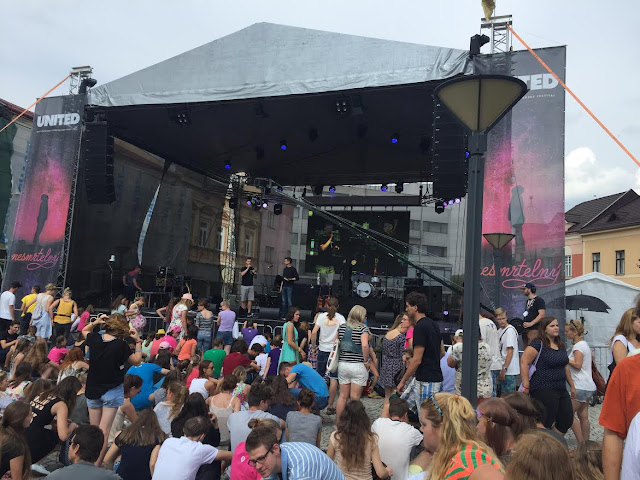 I wrote a friend this evening and told her that in twenty three years of living here in Czech and listening to Dave speak to people, I've never heard him more powerful than today. 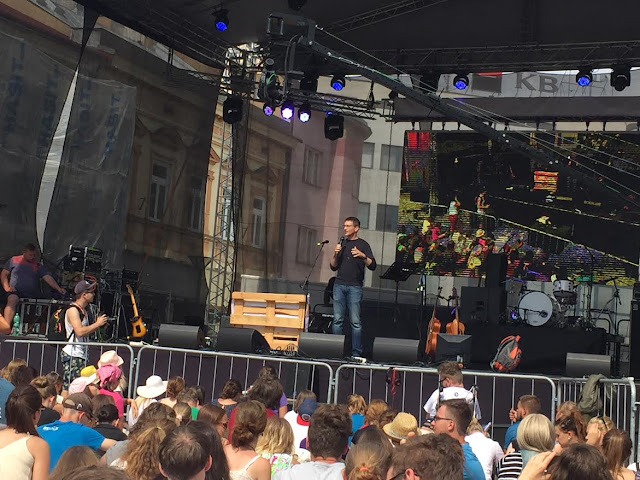 And by the hush and attentiveness of the crowd, it seemed like they were listening. 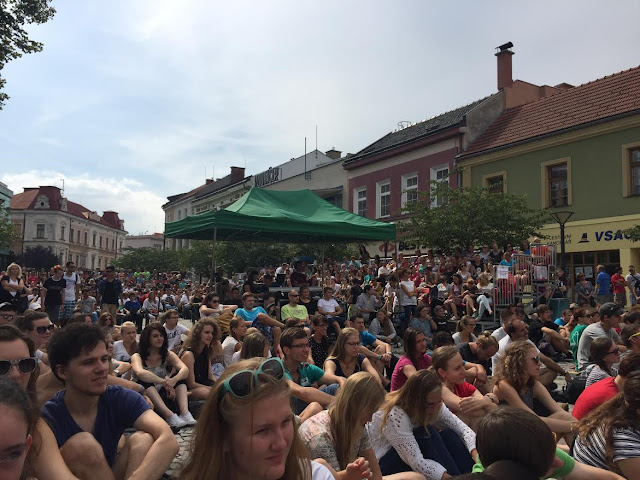 Speaking from Philippians, chapter 3, he talked about what it means to know Jesus, and power of his resurrection. 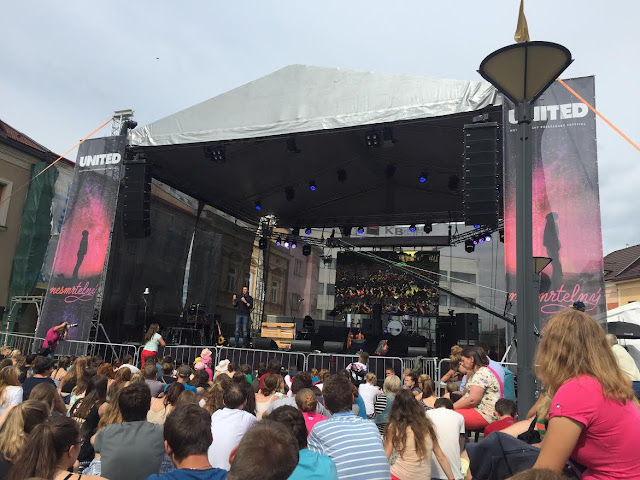 In true Dave style, he made it real by sharing a story of a friend of ours who has walked through much pain and suffering, to the point where she wanted to die.


Dave put on a heavy backpack, filled with big rocks, and talked about her sufferings as being like those rocks: she carried them around with her every day. 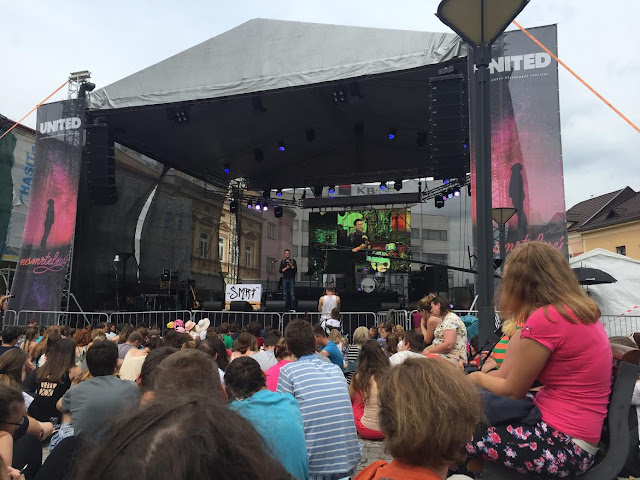 "Death is your worst enemy, but your best friend is the death of Jesus," Dave said.

He talked about how we met with her and helped her take those pains, sufferings, hurts, anger and lies out of the backpack and in prayer, give them to Jesus. 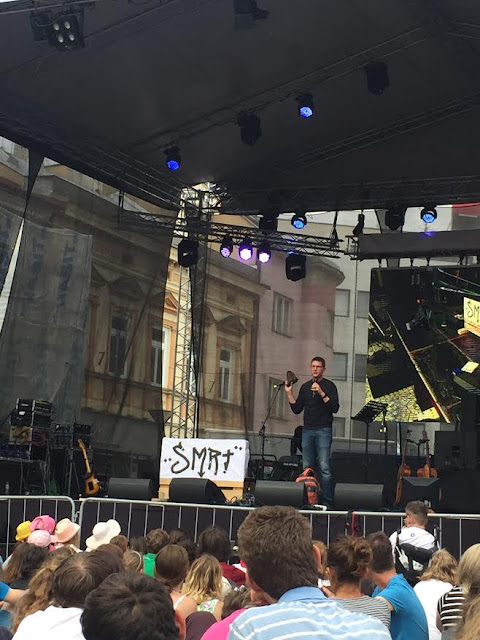 "Jesus didn't come to die for his own sin, pain and suffering, but for yours," Dave shared.

"He died and took all of that to the grave, and on to resurrection life...for you. And you can know that power, the power of his resurrection." 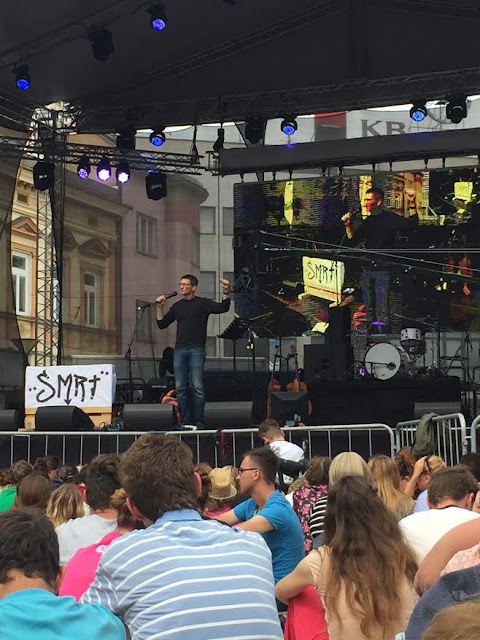 Dave had asked our friend if she had any words for these young people at Festival United, and he then read from her letter:


"Only Jesus heals, only he makes you whole…you don't have to be the sacrifice...he was! We are called to place our burdens on him and he TAKES them. You have to let him do that…you have to put it all on Jesus. PUT IT ALL ON JESUS so that you can live in freedom with him!"

When Dave came to the end, he prayed for each person there - that they would place it all on Jesus and let him take it to the grave and out the other side into resurrection life. 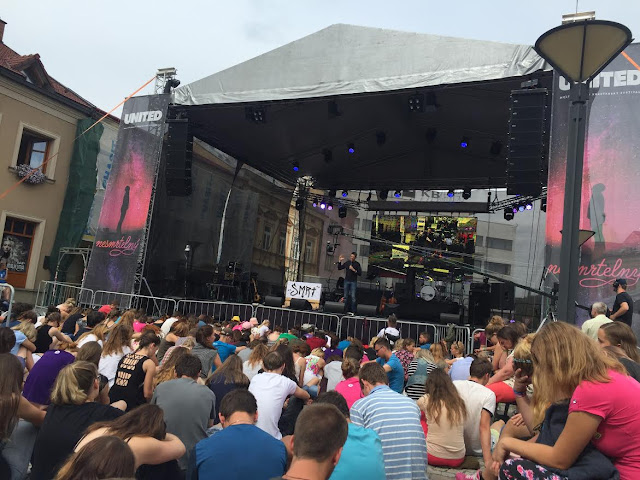 You could've heard a pin drop in that square. 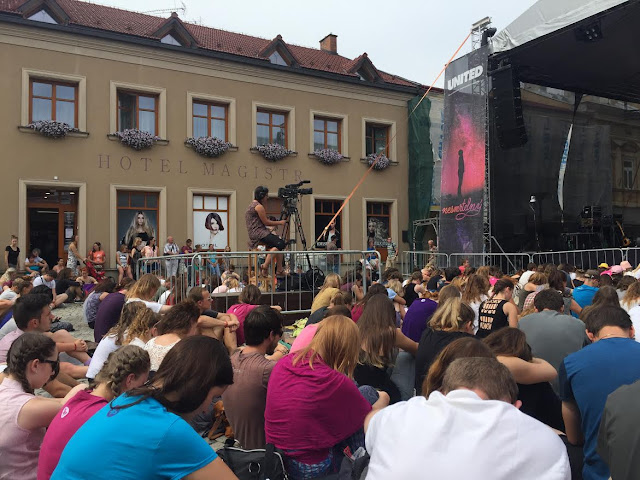 I'm simply not doing justice to the significance of the moment. All I can say is that it was very, very powerful, and I prayed that for many who were there, the truth would soak in and they would know Jesus in a very different and powerful way as they release their burdens, cares, sufferings and pains to him. And as they receive his power to conquer and be victorious over them.

How good it was afterward to see Dave and give him feedback (all good!) about how it went. I'm so proud of him! And in case you don't know, like always, he did that talk in the Czech language. 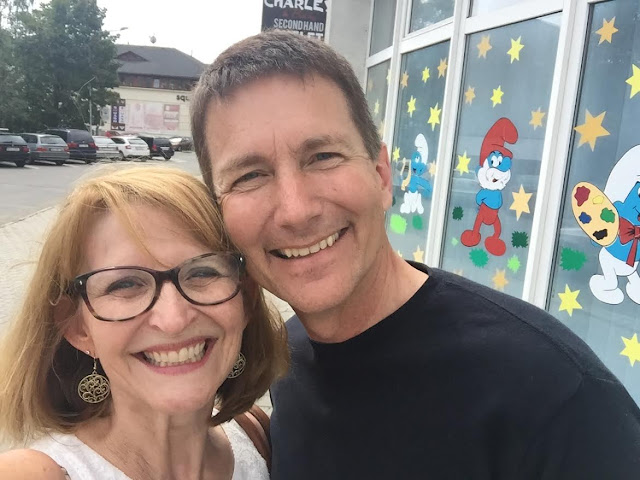 He told me that they already know of hundreds who have put their faith in Jesus at this festival. I'm praying that there will be even more by the end.

One of the volunteers (there are 600 in total to make this event happen) told the leader of the entire festival, "I am an atheist. Well, at least I was!"

"Change the heart of that man, and thousands like him Lord Jesus!!!"
Posted by Unknown at 11:00 PM