Eight days ago I made a mistake. I left my laptop in a rental car at the Denver Airport.

I tried calling and contacting the agency, not to mention, praying without ceasing, but to no avail. My original report disappeared on the website where I'd listed the lost computer, so I wrote another one a few days later. It disappeared too.

The chances of getting it back didn't seem very high.

On Friday a friend said, "Have you tried tweeting about it?"

Although I have a Twitter account, that was certainly not in my arsenal of possibilities to try in an attempt to get it back! But what did I have to lose?

I tweeted, calling out the name of the agency to say I was disappointed and feeling ignored over my attempts to contact them. An hour later I got a response.

"I'll email my colleagues about it. Private message me your details and I'll see what I can do." I did. And then I waited Saturday...Sunday. But nothing.

Wanting to give them the benefit of the doubt, I held out hope that I'd hear news by email on Monday, when perhaps they were back at their regular business day hours.

That email DID come today...but only to say they hadn't found it.

Assuming after eight days that there was no hope, I began to make arrangements to get another laptop, cringing at the thought of spending money for something that I already had. SAD emphasis on that last word.

In the afternoon I went to spend time with a friend who's been having a very difficult time. I had no idea what I could possibly say or pray that would make a difference. Plus I'm still struggling with jet lag which makes me sleepy and low on energy. But I went anyway, having read just today, "God gives power to those who are tired and worn out; he offers strength to the weak."  Isaiah 40:29

I trusted God's words would be true for me.

While listening to her hurting heart, all of the sudden the Lord "turned on the lights" and I understood what was at the core of her pain. I shared it with her and it resonated with her. We began to pray and seek the Lord, and then rejoiced with all our hearts when he brought powerful insight, redemption and transformation into her life. It was one of the most awesome and special moments I've witnessed.

As I drove away, I spoke out loud to the Lord, expressing my utter thanks and joy over his work in my friend's life. And then I said with a laugh, "If you could do that for her, surely you could find my computer! But apparently you don't plan to. And I'm really okay with that."

I got home late, made a quick dinner for us, and told Dave what God had done. My heart was at peace in all things at that moment...a glorious feeling.

But I was also tired. I sat down in a chair for a moment, contemplating whether or not I should just go to bed even though I had things I was still planning to do.

It was then I checked email on my phone. 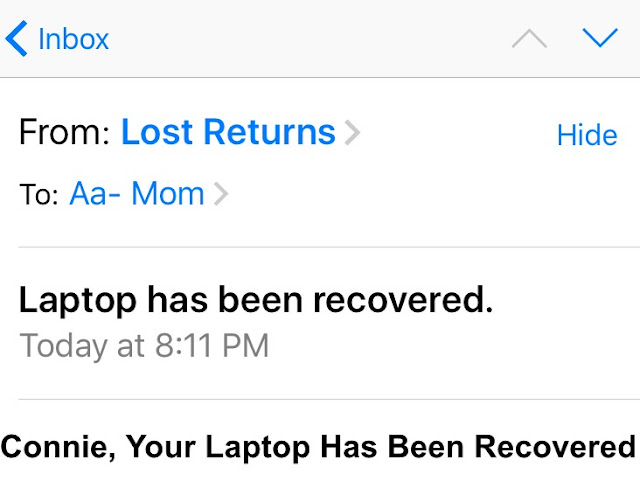 After eight days, the rental agency found my computer????!!!!

I don't know where it was all this time, or how it was found. I don't know if Tweeting about it helped, if my report was finally found, or if God wanted to bless me and was waiting for JUST the right moment to do that. I rather suspect the latter.

Thank you LORD for hearing my cries, for answering my pleas today! I first give you all the praise and honor for what you did in my friend's life. That was spectacular!

And second, thank you for caring about little things like lost computers. I'm so thankful for your protection over it, and for bringing it to the surface at just the right time. You are good, all the time, no matter what. But it's extra special to me that you had grace and mercy for me, and found my computer! Praising you, doing a happy dance, rejoicing out loud and feeling thankful with all my heart!!


Claire goes to Denver airport on Thursday to fly back to Chicago for her last semester at Moody Bible Institute. I've arranged for her to pick it up for me. She'll hang on to it, then pass it on to Tyler and Lara when they fly out here in early September. So I won't see it for a few weeks but that is OKAY!

I'll just be so thankful to see it again when it gets here safely.

If you happened to be one of the people who prayed about this, THANK YOU! God heard you!
Posted by Unknown at 9:12 PM