When I was a senior in high school, I thought I wanted to be a lawyer and do something to change my world.

I declared myself as a political science major and headed off to the University of Oregon as a freshman.

Somehow during spring semester that first year, I ended up in a junior level government class. Don't ask me how that happened - it shouldn't have, but it did.

I struggled terribly, and only made it because of a wounded Vietnam veteran who was a teacher's assistant and offered to tutor me. He worked so hard to try and help me understand what the professor was teaching, and I only passed the class because of him.

Shortly before I took the final exam I remember him telling me, "This field is not for you. It will chew you up and spit you out, and you're too nice of a girl for that. Go find something else that you love and give your heart to it. But don't pursue political science. It's not a place for people like you."

I took his advice, transferred to a different college, got a teaching degree that led to a year as a teacher in Spain, dated Dave, got married, and the rest is history.

I did what the veteran said: I found something else and gave my heart to it...following Jesus and making disciples.

However, I never lost my love for the USA and what it stands for. 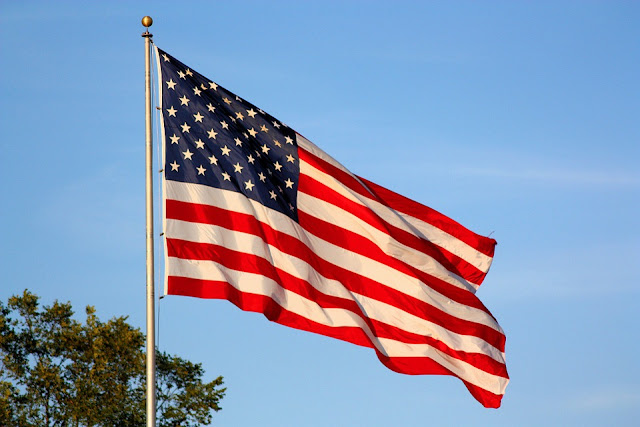 That love increased during the years we served as missionaries in Germany as we worked on US military bases with the teenagers whose parents served in the military. Often I found myself with a lump in my throat and tears pressing at the corners of my eyes when the color guard brought out the flag at different events.

Being in the midst of people who were sacrificing for the sake of freedom, made our country and what it stands for all the more meaningful to me.

In the past 32 years, I've only lived in the United States for a total of 2 years and nine months. But I still carry a US passport and am a US citizen.

For that reason, I voted in this year's election, as I have since I turned 18 years old. It's my right and my privilege to cast my vote for the leadership of our country.

There are many things that make me sad about today's state of my country, and I'm not proud of decisions, policies and abuses of power that happen in the name of the United States.

However, having just returned from a month there, I can say as I've said before: this is a nation of many people who follow hard after God, who invest their time and resources in His kingdom, and care about reaching the world for Christ. For THAT I'm proud!

I don't know how this election will turn out or what I will find when I wake up tomorrow morning here in the Czech Republic. Most likely, a winner will have been declared as the next President of the United States.

But no matter what, there will be people in the United States who will continue to care, give, serve, love and honor the Lord as the Savior of their lives.

That's what I will continue to do as well.
Posted by Unknown at 11:00 PM