Just a few minutes before boarding was complete on our flight from Chicago to Frankfurt, a young woman came and took the third seat in our row.

On an 'over the ocean' flight you're always hoping that you'll have that extra seat to stretch out on, so honestly it was a bit disappointing that she came at the very last moment. Not only that, she was coughing uncontrollably which was both worrisome (that she was really sick) and bothersome (that it was so close by).

Before we even left the ground though, the Lord convicted me that I should not be critical, that it wasn't that big of a deal, but that I should be compassionate towards her. So I leaned over Dave and asked her if she was doing okay. She said she wasn't sick and didn't know why she couldn't stop.

We pushed back from the gate at that point, and I thought to myself, "When the seatbelt sign is off, I'll ask her if I can get some water for her."

But I never got a chance.


That's because as soon as we were in the air, Dave turned to her to say hello and from there, two hours of conversation took place where he shared the Gospel, and she put her faith in Jesus! 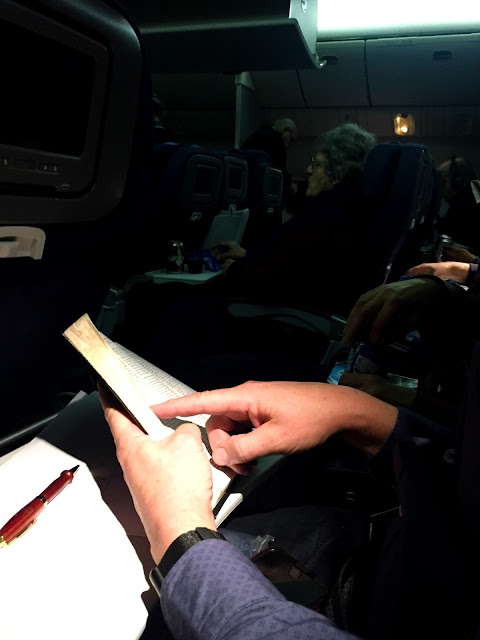 To protect her privacy, I'll only say that there was a real need in C's life that had prepared her to receive the message of hope, and to say yes to Christ.

As she bowed her head to pray, I was overcome with tears. And awed at how God had strategically placed her next to us when she shouldn't have been there; she'd switched places twice already before coming to sit beside us for her third try at a seat.

We had THE most delightful conversation with her throughout the flight, and exchanged addresses in the end, assuring her that we'd send her a Bible. She lives in a middle eastern country, but it's one where she should be able to receive it.

Please pray for our new friend, C, that she will get connected with believers where she lives (it's possible), and become grounded in the Word and in her new faith. And pray that her faith will grow and that she will cling to the Lord for the rest of her life.

We look forward to spending eternity with her!
Posted by Unknown at 4:30 PM