Pastor Orawski: Giant of the Faith

Twenty five years ago, when Dave was doing research throughout Central and Eastern Europe, seeking where God would have us begin Josiah Venture, he met a very special man here in the Czech Republic. 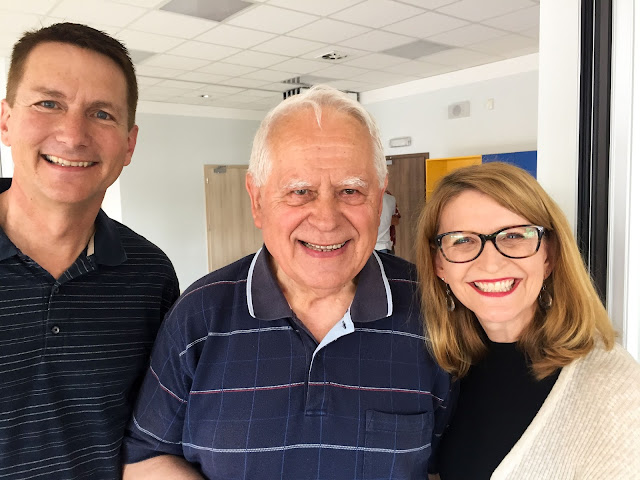 Jarek Orawski, a pastor in Ostrava at the Církev bratrská (the denomination we would become a part of once we moved to Czech) opened doors for us to begin the work of Josiah Venture in Ostrava, inviting one of our founding couples, Ken and Andrea Pitcher, to come work with youth at his church in 1994.

Fast forward six years later in 2000, Pastor Orawski, who was also a building engineer by trade, became the project manager for our reconstruction project at Malenovice, the Josiah Venture training center. This led to many hours of working together as he competently managed that project, tirelessly seeing it to completion in just 52 weeks.

As years have gone by, he has continued to be part of our Malenovice projects, as well as having managed the construction of our home back in 2002. 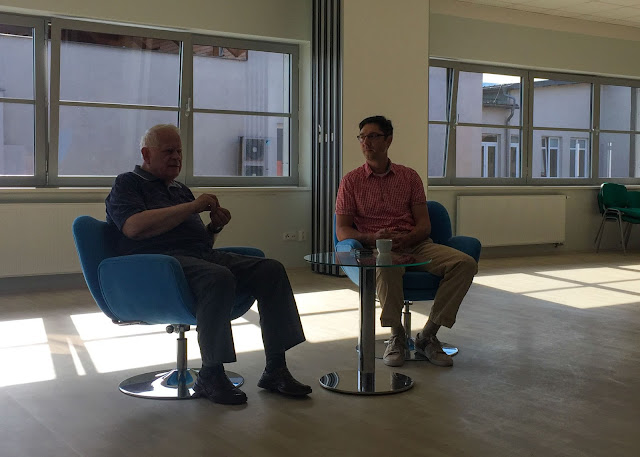 Today, the KAM team, our Czech partner organization, honored Pastor Orawski for his 80th birthday by bringing him to their Tuesday meeting to share about his life and commitment to Christ for 60+ years. 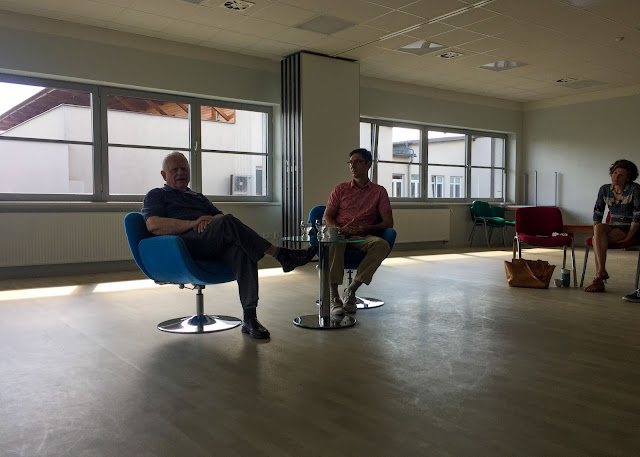 Many today don't know his story of coming to Christ during the years of Communism, and his steadfast faith through the subsequent years as he eventually pastored and built several churches in the CB denomination.

As he shared, I could hardly hold back the tears. This man is a hero of faith to me, and means more to us than he will ever know. His deep faith in God, that has persevered through the test of time and trial, is still an encouragement to us, as is his unwavering support of our work with young people in this country and across Europe. 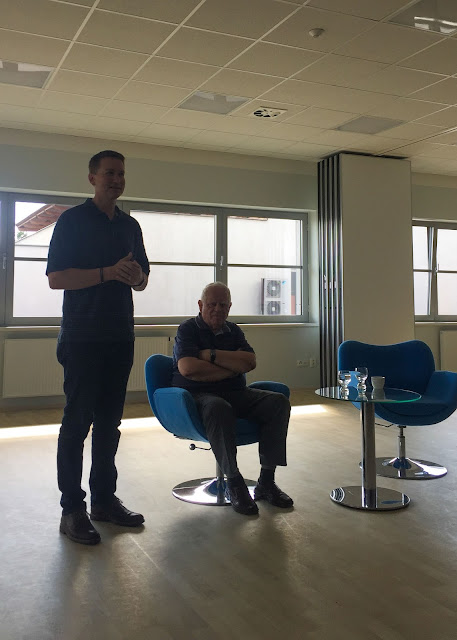 Dave shared some of these thoughts today, thanking Pastor Orawski for his dedication and perseverance to walk with God for so many years.

For weeks we have been trying to think of a gift for this servant of God, and dear friend of ours. Through a small miracle, we found just the right thing to honor him for all he's done. 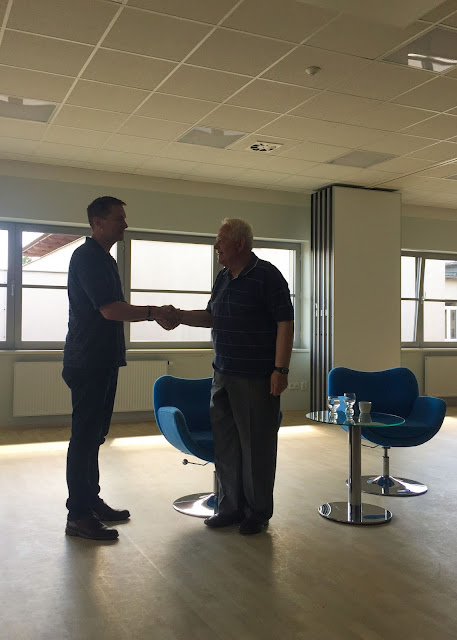 Just yesterday God literally led us to the perfect gift! 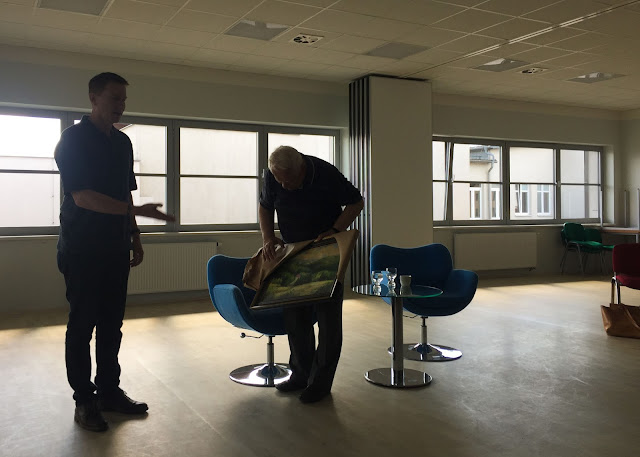 A painting of the Malenovice training center by a local artist! 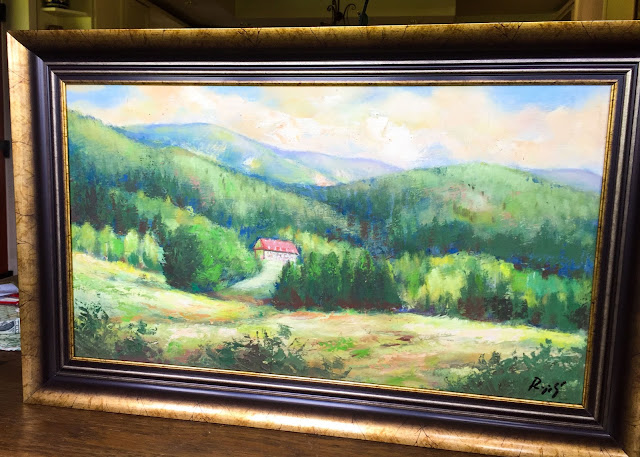 We stopped by his studio in hopes that there would be something of meaning to give this man who has given so much to us. Little did we know HOW perfect the gift would be! The artist told us he had painted it years ago, wondering why he did because it was such a specific painting that he knew very few people would want.

We know that he painted it for us so we could give it to Pastor Orawski!

Not only that, but our local frame and glass shop in town was willing to frame it "same day", which is unheard of. What a treasure we could give to honor this man of God. 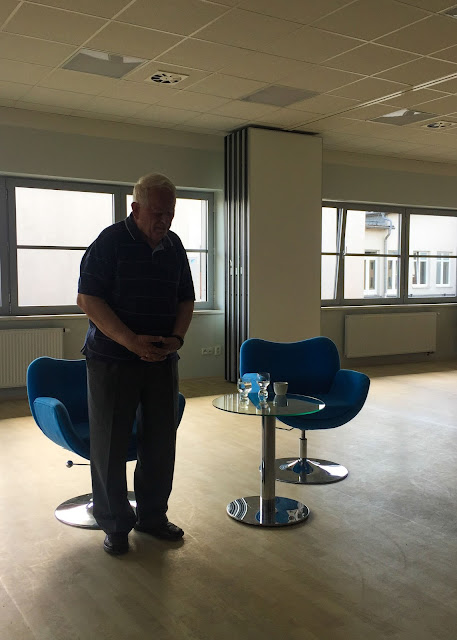 After sharing his story of faith, he (in typical fashion of being centered on the Lord and others), prayed over all of US who were there this morning. Again, I could hardly hold back the tears.

This man, with an ever present smile, is a giant of the faith. 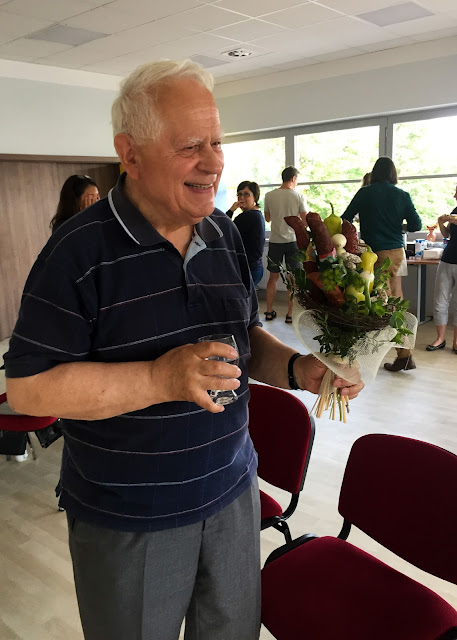 We, and so many others, are richly blessed to have him part of our lives here in the Czech Republic.
Posted by Living By Lysa at 10:00 PM