On the Lighter Side...

There are days when we see the power of God at work. Those are AWESOME DAYS!!

Then, there are days that are...well, just frustrating normal!

In one area of our lives, I've been experiencing a frustration that's lasted a while.

Back in early March, before my parents left to come visit us, my mom mailed a package of very random items, worth almost nothing, in order to save space in her suitcase for her more important things. The only thing of real value was a small quilt top that my grandma had made before she died.

Normally packages take between 10-14 days to arrive from the US. But two weeks went by and no package.

A week after my parents arrived (so this is now three weeks after she'd mailed the package) I got a registered letter in the mail saying that the package was in customs in Prague. I could either go to the office in Prague (a mere 3 hour train ride away) or send in multiple forms, along with the receipts, for everything that was in the package.

If it wasn't for the fact that the package was from my mom, I wouldn't even KNOW what was in the package! And they want receipts???

I wrote to them to say that the package was from my mom, that she was here visiting, and that it was going to be very difficult to get those receipts.

This set off six weeks of back and forth with a man in the Prague post office. He and I were almost pen pals by the end!

Finally, after 9 weeks from the time my mom mailed the package, and many forms filled out and sent to him, it arrived at our post office.

Of course my mom was long gone by then, so the vitamins she'd sent for herself were no longer needed, and the sewing project she was going to do with Claire was past the point of possibility.

We have lived here 17 years and only once have I had to pay customs for a package. However, after receiving this package, and reading the enclosed papers, I could see that times have changed.

Due to some new EU postal regulations (since March 13th), packages are subject to customs searches, and you can be charged a tax to receive the packages.

I have searched, and searched and searched, on the internet to try and find and/or understand what the regulations are...to no avail! (And the post office ladies don't know either!)

A padded envelope with some things in it arrived with no problem a few days ago. My mom's package was in a box. Are there different regulations for envelopes vs. boxes? I don't know!

I do know that I had to sign over power of attorney for that package so that my "pen pal" could go to bat for me and get it out of customs! How weird is that!

In the end, the day I finally received the package, I found out how much the customs charge was supposed to be. 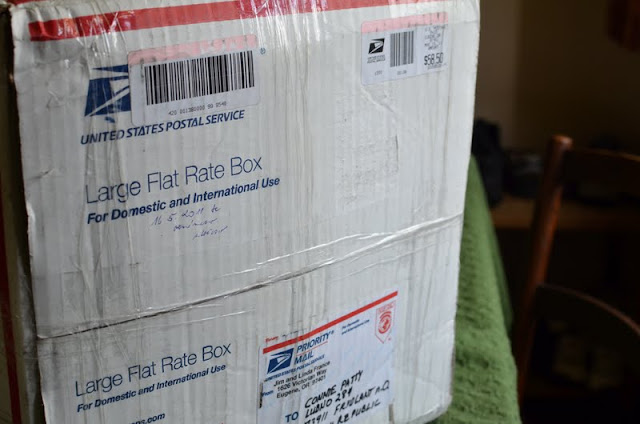 Such is normal life around here sometimes!
Posted by Unknown at 6:14 PM