Claire headed back to the States to begin her third year of college on Saturday. But due to internet issues, I didn't get to write about it. I think I have a stable connection today so I'm going for it while it lasts! 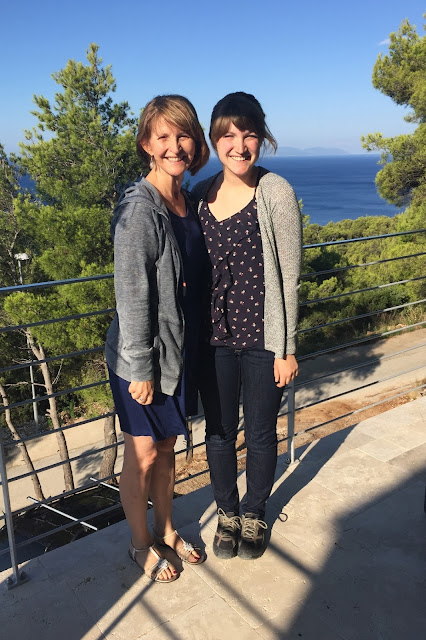 Saturday morning, bright and early, she and I headed off to the airport for her flight.

Due to a storm the night before, the parking lot closest to the airport was closed (the gate wouldn't open!) so we parked at another lot and had to walk a ways. 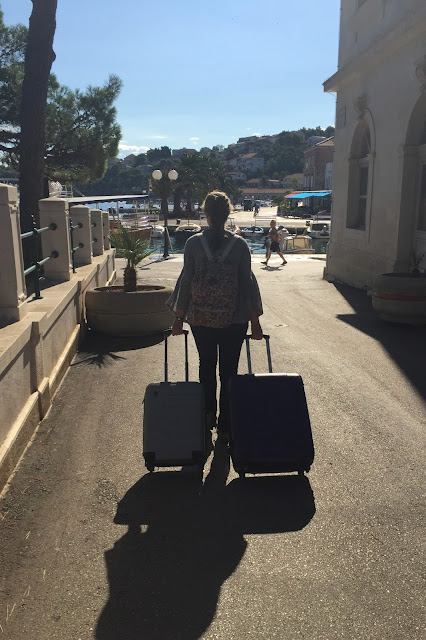 By the view of where Claire's walking, you'd be right to wonder what kind of airport we were leaving out of. And why I was going with her. 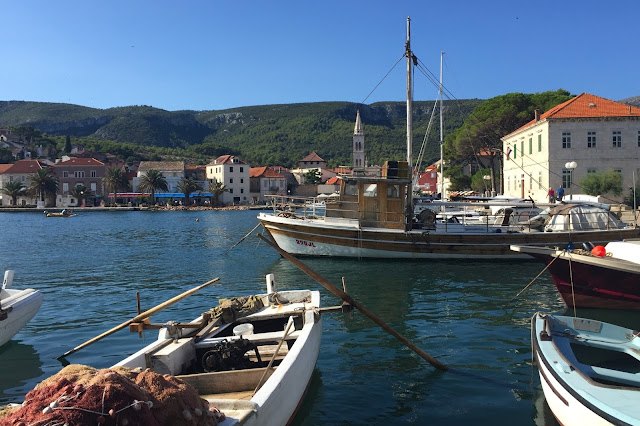 We made a quick stop at the airport to check in, and then headed for the plane. 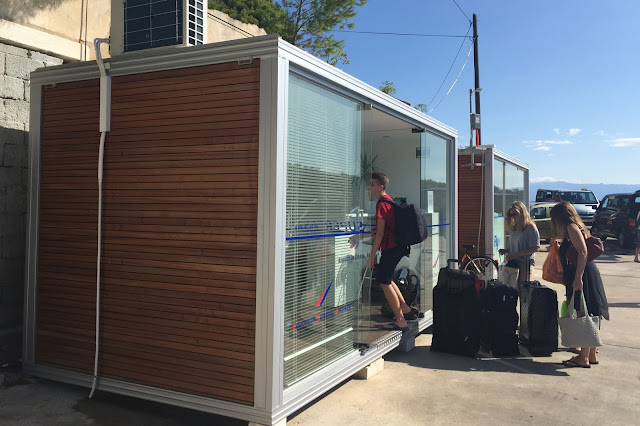 Can you see the plane we had tickets on? 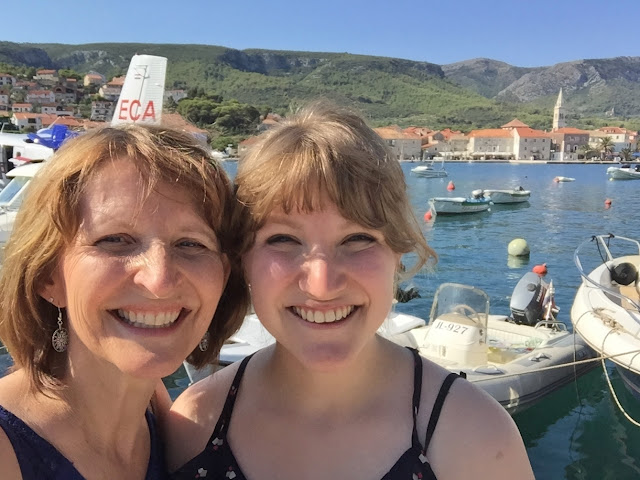 Yes, we were leaving on a seaplane from Hvar, headed over to the main airport in Split! 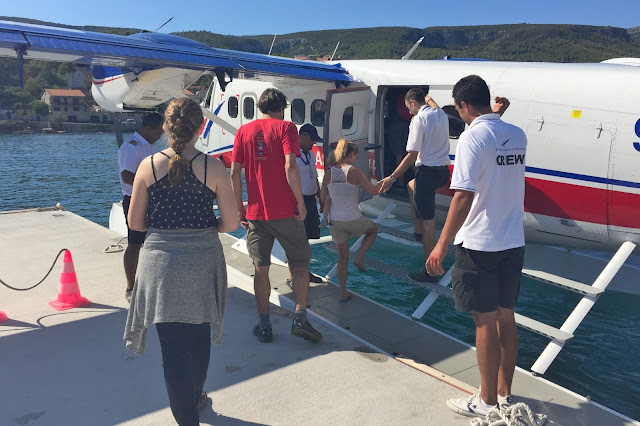 Fifteen years ago someone began the process of registering a seaplane airline here in Croatia - a very smart idea, I might add considering how long it takes to get between islands and to the mainland by ferries. It literally took them all those years before the permissions were given, and regulations were met. They flew their maiden voyage last summer and have been expanding ever since.

But the first flight ever was out of Jelsa, here on Hvar. And that's where Claire and I left from on Saturday! 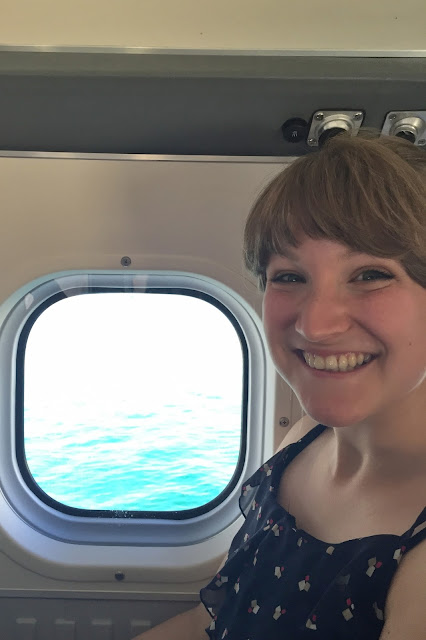 To say it was a thrill doesn't even come close to describing how cool it was to get into a 16 passenger plane, have the pilot give the pre-flight talk, and be able to see him in the cockpit the whole way! 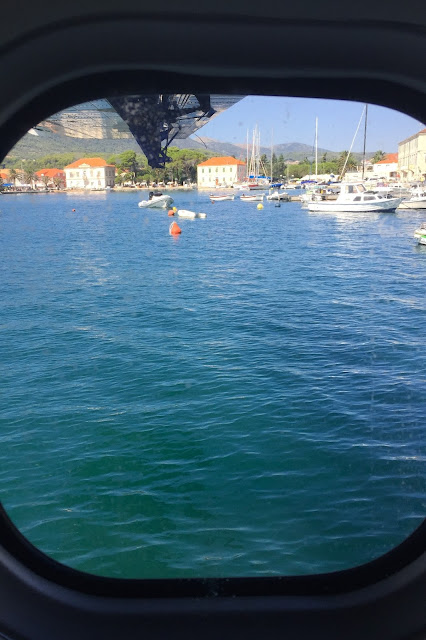 You can reach the mainland by ferry in 2 hours, and by catamaran in 1 hour and five minutes. But by seaplane? 13 minutes! 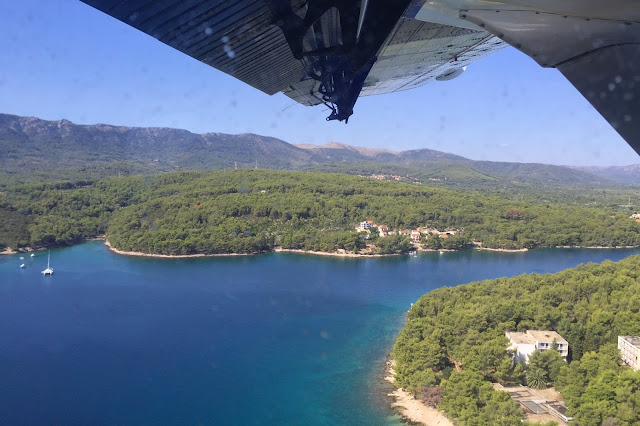 Yes, I admit I was pretty giddy all thirteen minutes! It was just so fun to see the island we love from the air! 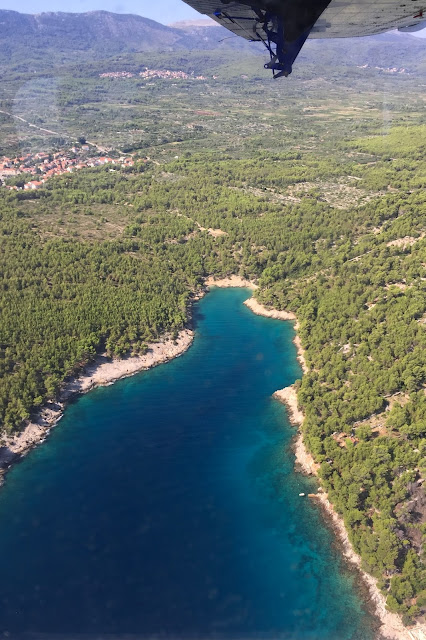 Though it was a bit of a bumpy flight (didn't bother either of us), a sweet little German girl sat behind us throwing up the entire flight (poor thing!). I felt so bad for her. And her mom! But before we knew it we were back on the ground/sea. 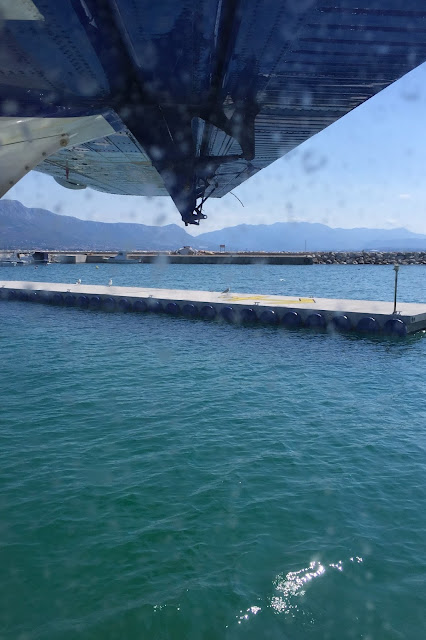 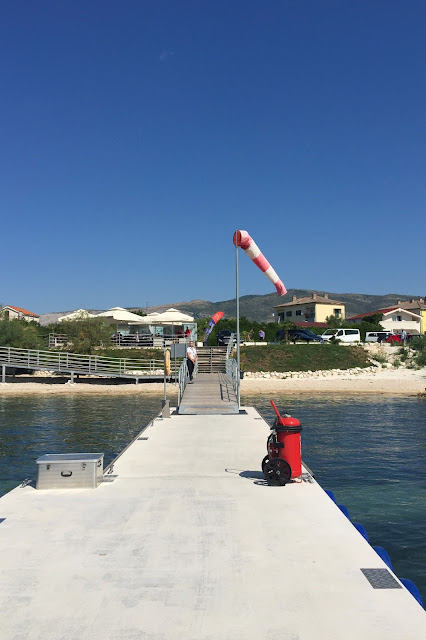 The crazy thing is that this is the very place where we brought Tyler in our little boat when he flew to Chicago for his first year of college! We literally parked right where those boats are to the left of the seaplane. How funny to be back here six years later taking Claire to the airport via a very different transportation mode! 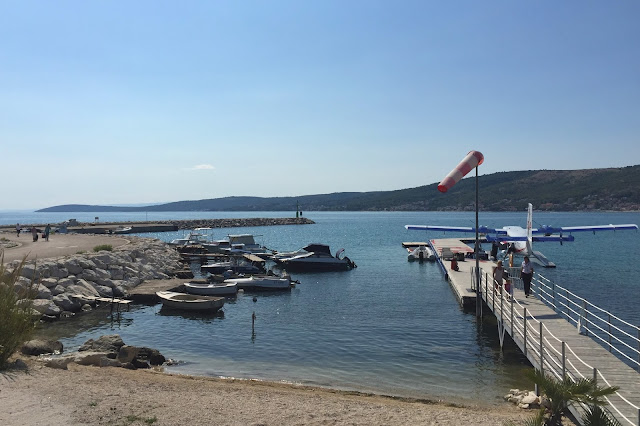 Check-in went quickly and soon it was time to say our goodbyes. 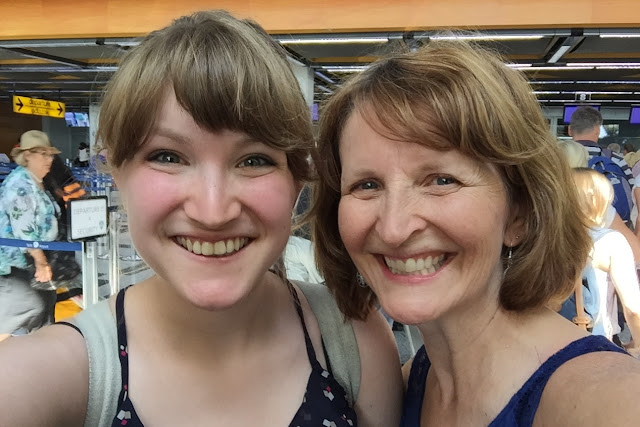 It was definitely less emotional than two years ago when we sent her off for the first time!

Oh and why did I go with her, besides wanting to take the seaplane? Because the plane has quite low weight allowances so I had to take a bag for her and then repack everything at the airport! I took an empty one back to Hvar after saying goodbye. 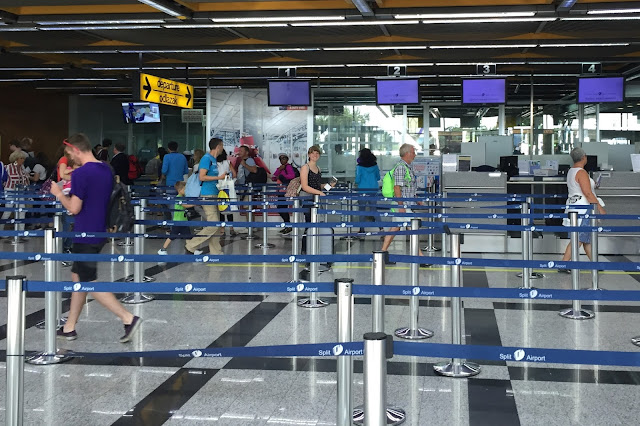 While she headed through security and on to her flight, I walked back over to the terminal to wait for my seaplane flight back to Hvar two hours later. 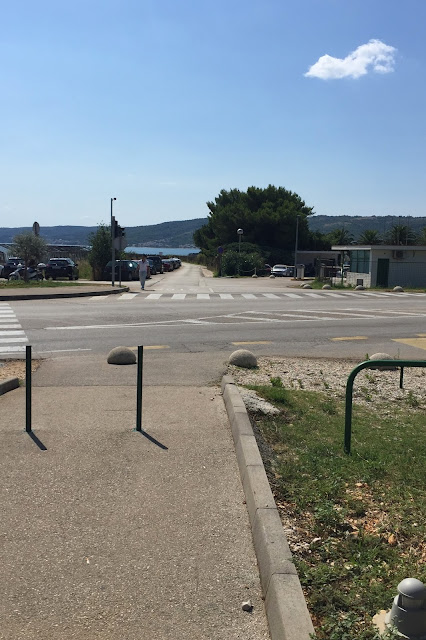 I thought I'd just sit and read for those couple of hours while Claire headed towards Copenhagen for a quick layover, and then on to Chicago. Unfortunately, that's not what happened.

Her flight left Split two hours late, which bumped her from the flight to Chicago. They couldn't rebook her from Split as there were no flights, so sent her on to Copenhagen with the news that she would most likely be rebooked the following day, and put up in a hotel overnight.

But after hours of standing in lines, she was told there were "no rooms in the inn" in Copenhagen due to a marathon taking place there. NO ROOMS!! That's hard to believe. I don't know what they expected her to do when they told her to get out of line because there just wasn't anything available.

Someone finally had mercy and actually put her on a flight to Stockholm at 8:30 PM, just so she could have a room to sleep in! But it was a very long day for her getting to that room. And so hard for me to be unable to help her from Croatia. 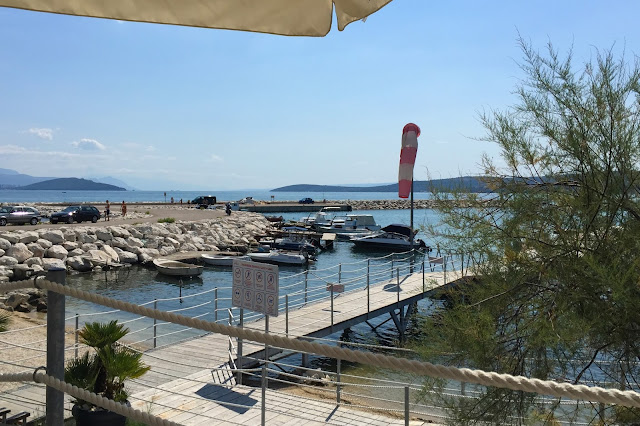 But the Lord is good. ALWAYS. He met her needs in some beautiful ways, and she ended up in a $300 a night room right at the Stockholm airport - like she could look out from her room into the airport! She slept well, had good food and coffee the next day, and was finally on her way at 10 AM and made it safely to Chicago Sunday afternoon. 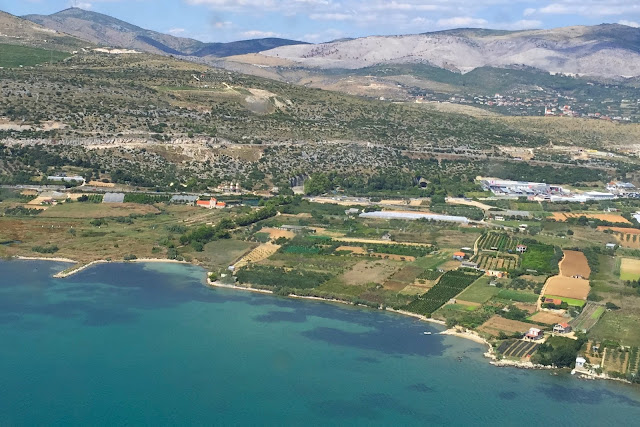 I made it safely back to Jelsa after my two hour wait, praying the whole way, and for the rest of the day for her. And again remembering that while she is my daughter, she is her Father's daughter in a deeper and even more amazing way. And he's "got her" more than I ever could! 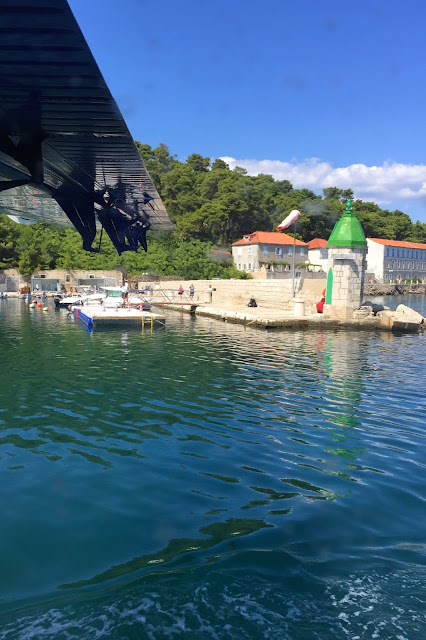 She already started classes back at Moody today and is right where she needs to be!
Posted by Unknown at 5:19 PM