It started in 2003, one summer afternoon in the backyard of our friends' house.

"What would you think about going on vacation together this year?" I offhandedly asked Mel and Amy as our kids played together in their yard.

The idea to ask Ellenwood's and Hash's, JV teammates, to join us on vacation had been percolating in my mind for a few weeks. 'What would it be like to go on vacation with friends rather than just our family?' I mused.

With seven kids between us, ranging in ages from 7 to 13, and good friendships between the adults, it seemed like a fun idea to try.

Later that summer, despite Noah breaking his leg days before we were to leave, we caravanned down to Croatia to spend a week camping together.


When the next summer rolled around, we all agreed it had been so good the summer before that we should try it again. So off to Croatia we went for another happy week of camping.

Two summers of vacations together turned into three, four and five...and finally nine years in total. We didn't miss a year between 2003 and 2011.

It's hard to describe the sweetness of those years together with our dear friends. We had never-ending days of fun, spoke into each others' lives, shared adventures, laughed and cried together, took turns cooking for each other, taught our kids to love coffee in the mornings, hiked mountains, swam in the sea, and made a lifetime of memories.

But eventually we made the decision to end our vacations together. Our kids were growing up and heading off to college. Tyler was already gone, and Hannah was about ready to leave. We felt it would be too sad to dwindle down to just a few kids each year, until Noah was the last one. So in August 2011 we said goodbye to vacationing together after nine wonderful years of sharing those special times with each other each summer.


However, that's not the end of the story!

Four years earlier we switched vacation locations and headed down to the island of Hvar, off the coast of Croatia from Split. Dave heard it was the sunniest island in the Adriatic and thought we should try it out one year. So again, we caravanned together from Czech and Poland, driving through the night to get there.

But after a long, hot drive down the island, looking at every campground along the way and not finding one that seemed right or had room for three families to pitch tents next to each other, we almost didn't stay.

As a last ditch effort, Dave and I left the group at a campground that didn't have room for us (adults needed naps, kids needed out of the car!) and headed to the south side where someone told us there was one last campground to try.

Driving past the hand lettered sign that read "Camp Lili" we weren't very hopeful as we drove down the steep road.

It wasn't fancy. In fact, it was probably the most "roughing it" campground we'd yet to stay in. But there was something magical about it. Maybe it was the whisper of the pine trees, the scent of rosemary, or the glow of sunshine peeking through the treetops. We hadn't even seen the beach which we would soon discover was one of the most magical parts about the campground. Whatever it was, we knew we'd found our spot to stay.

And stay we did. For the next four summers. 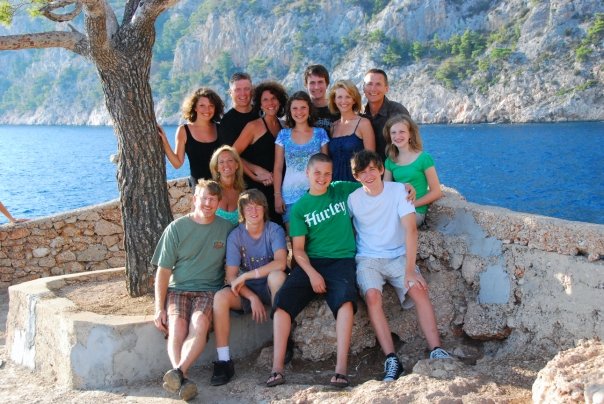 And still, this is not the end of the story! Hang with me.

By this time we'd been camping with each other for five years. We'd all settled into various roles that made vacations work, and one of the things Dave and I always did in a new location was scout out what was in the area.

On our first morning in a new place we'd go out looking for where to buy groceries, where to get ice cream (essentials, you know?!) and looking for what kinds of activities there were for us to do.

The first morning at Camp Lili, on the south side of Hvar in between the towns of Ivan Dolac and Sveta Nedjelja, we chose the latter to go into on a Sunday morning. And this is where the story of "The House That Friendship Built" begins.

That morning, as Dave and I walked through the little village of Sveta Nedjelja, something happened in our hearts. We fell in love with it. I don't even know how to explain why. It just happened.

As we walked up from the harbor through the trees, I remember Dave saying "I'd like to have a house here."

In all the years we'd vacationed in Croatia, neither of us had ever had a thought like that. It was always just the vacation place. But somehow that Sunday morning, we felt like we'd come home.

We quickly drove back to the campground and got Ellenwood's and Hash's to come back with us to see the little town (population 150), and tell us if we were crazy or if there really was something about it that was special. As soon as they got out and walked around, they felt the same way.

What's even crazier is that this was a Sunday morning and do you know what the name of the town means? Sveta Nedjelja means "Holy Sunday". And honestly, we felt like we'd stepped into something that really was holy and from the Lord.

After talking about it together, dreaming and wondering if it was at all possible, Dave spent several days of that vacation over in Stari Grad at a real estate office, finding out if there was anything available to buy.

At first it was all just in fun. We didn't really expect to buy anything. Who does that on vacation?? But then the first of many of what we call miracles, occurred. A piece of land was for sale in the village. It had just been discounted and when we went to look at it, we were mesmerized. It was a really special plot of ground at the edge of the village, on a hill, with a view out to the sea.

The six of us adults prayed, talked and prayed some more during our days of vacation.

"What would we do with the land? Would we camp on it? Would it be an investment? Would we ever build something? Or would we just end up selling the plot of land someday?"

We asked these questions of each other, and many more, as we pondered what God's purposes were in bringing us there and leading us to the piece of land.

By the end of vacation we decided to take the next steps: to see if we, as foreigners, could buy the land, to look over our finances and see if we could all manage it as an investment, and to see if our bank in Czech would give us the loan we'd need to buy it.

When all the pieces came together, we purchased the land in early October 2008. Just before the economic crash happened. If we'd tried to do it even one month later, we wouldn't have been able to. But we all give credit to the Lord for working out the timing of the purchase as it went quicker than expected and by the end of that month, we three couples owned a piece of land in Sveta Nedjelja, Croatia.

Over the next three summers as we camped at Camp Lili, we'd go over to the land to look at it. There were a lot of different versions of what we might do with it back then. But in the end, we all felt that the right next step was to see if it would be possible to build a small vacation house on it - something that we could rent out during the summers that would give us a return on our money, but which could be used for family and friends during the off season.

With the addition of a family member of the Hash's coming in to join us as an investor on the project, "The House That Friendship Built" was born.

It's taken seven years to become a reality. We've all invested many hours of thought, time, labor and love into bringing this dream to life. There were times along the way where it looked like it wouldn't happen, yet the Lord kept opening doors that we walked through.

As I write tonight, I am sitting in that house...the house that love and friendship built. We've walked an incredible road with each other these past seven years...well, it's really many more years than that. But seven years of being in this crazy dream together of creating a "home away from home" for our families, a place where we hope to make many more memories together for years to come.

The house is nearly finished now. While we had a builder on contract to do the main construction, we've done as much work of our own as possible. If you've followed my blog over the past years and seen posts about being in Croatia in summers or off seasons, it's because we've been here, working!

We had hoped the house would be ready to rent out this summer, but that didn't happen. So we continue to work during our vacation and hope that all the permits and final work will be done in time for next summer's rental season - a period of 100 days where we hope it will be full!

In the meantime, we'll keep working on it until it's done, and try it out this winter to see how it works in off season.

We haven't taken a lot of photos yet since it's not completely done. So this is just from my phone. But this...this is the house that friendship built! 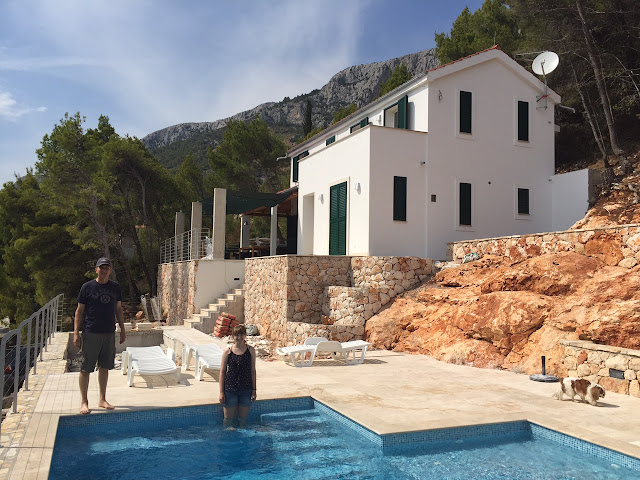