About three weeks ago our neighbor started come over daily - the one I've written about before here and here.

Each time it was to say something about a woman she called "Pani [Mrs.] Muchova". I didn't fully understand what the context was, or why she was telling me about her, so just smiled and nodded as she talked.

When Dave got home from the States a week later, she came to talk with him about Pani Muchova too. And even he didn't quite understand who she was, or why our neighbor was telling us about her. All she kept saying to both of us was, "You know her...she knows you".

But neither of us know who she is talking about!

Last week she came over every day while Dave and Caleb were away...and most times wanted to tell me about something that she is making for Pani Muchova. Each time she asked if I thought she would like it, to which I replied, "I'm sure she will"...but thinking to myself, "I really don't know what to say since I don't even know this person!"

On Monday this week, she showed up at our door again with this in her hands: 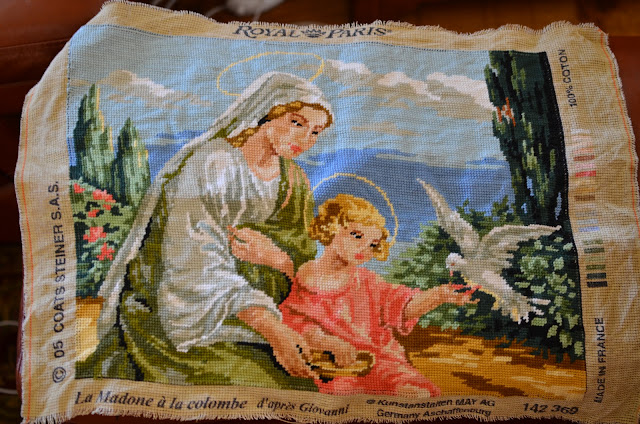 I don't know how well you can see it, but it's a beautifully hand-crafted needlepoint.

As soon as I had given her my thoughts, she folded it up and put it into my hands saying, "Good...then you can take it to her!".

*GULP* I was literally speechless!

She assured me it was...and then walked away, smiling to herself.

So this mystery is not solved! I still have no idea who Pani Muchova is, where she lives, or how we will deliver this needlepoint to her!

Hopefully there will be an update to this story as soon as Dave gets home and we figure out who this mystery woman is.
Posted by Unknown at 11:11 AM

Email ThisBlogThis!Share to TwitterShare to FacebookShare to Pinterest
Labels: Neighbor