When I wrote about Freedom and Democracy Day last week, it prompted me to ask my brother a question, which led to this longer post today.

I wanted to know if he still had photos from his trip to Czechoslovakia back in 1985, before Communism fell, and I wanted to hear more about that trip.

I was living in southern Spain that year, teaching school for some missionary families. Mike came to visit me, then went on a month long trip throughout Europe using a Eurail pass.

One of the places highest on his list for that trip was Czechoslovakia. In a recent email telling me some more details from that trip, he wrote:

"I wanted to go to Czechoslovakia because our relatives came from Bohemia and it just seemed so magical to think of Prague." 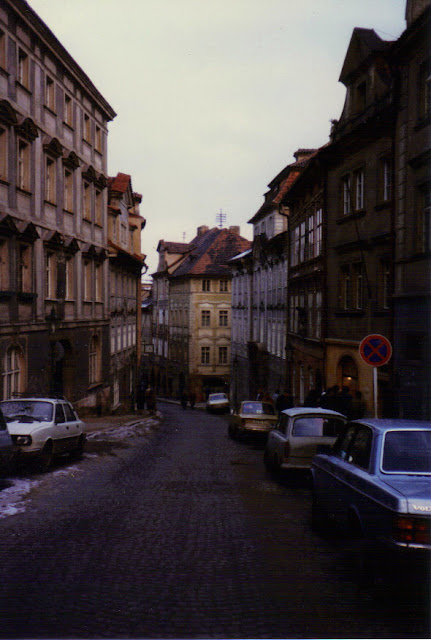 So off he went, into a country where he didn't speak the language, nor did many speak English back then! He wrote:

"My most vivid early memory is of the old woman on the train going from car to car selling drinks and snacks. I can't remember buying any snacks but I did buy a Budvar or two! I don't remember changing any money at the border, but I do remember going across the border and sitting there while the guards came through the train.

"It's difficult for us to remember now just how tense the Cold War was, but once you crossed the border it felt like you lost any of the rights that we enjoy in the Western world. It really felt like no-mans land."

"I met a man on the train ride and started talking to him sometime around Plzen. He didn't speak English, but somehow we communicated...amazing how beer brought us together! By the time we got into Prague the Cedok office (official tourist bureau) was closed so my friend took me to the Zlata Husa. It was probably the only hotel he knew of.

"The first night they put me up in a large room, really had an old world charm to it.

"I got back to my room that night and they told me my room had been moved. The room they put me in was a very small one, right next to the boiler room. All of my possessions in my suitcase had been gone through, but my Bible was still there!" 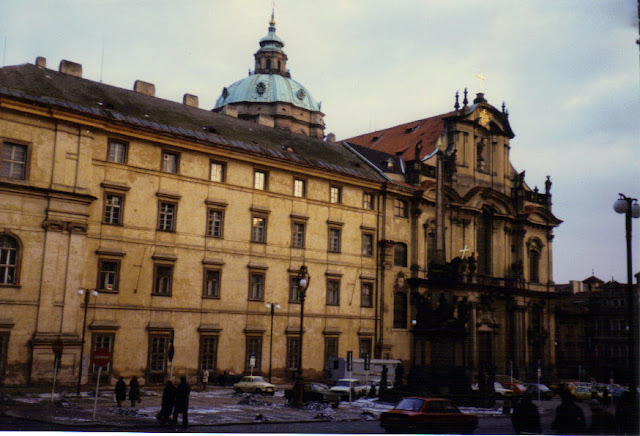 This is not the Zlata Husa hotel (which is still on Václavské náměstí in Prague!), but it's a church in Prague where Starbucks, McDonalds, Subway and the American Embassy are all just a few minutes away today! Who would've ever thought of that being possible all those years ago when Mike took this picture? 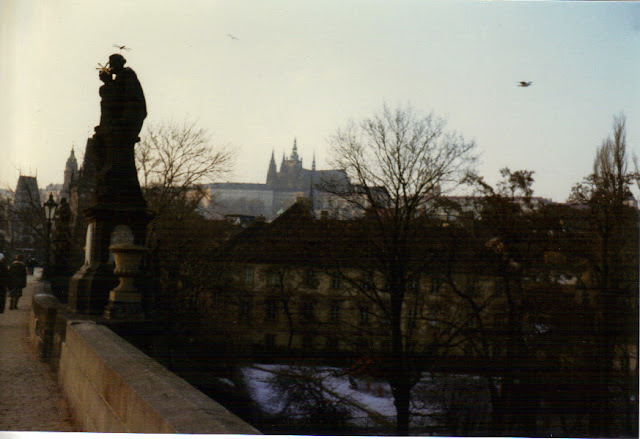 "I stayed in Prague for a couple of days and mostly just walked the city. I was there in late January or early February 1985 so of course it was cold. But what I really remember and often contrast with my later visits was the amount of people out and about.

"I recall being the only person on the Charles Bridge one morning, except for a few older women in their babushka's (head scarves...what my great grandma, who was from Czechoslovakia, called it). Every time I've visited later there were hoards of tourists on the bridge at any time, day or night! But everything seemed so grey and lifeless back then. However, to be fair, it was in the middle of a cold winter." 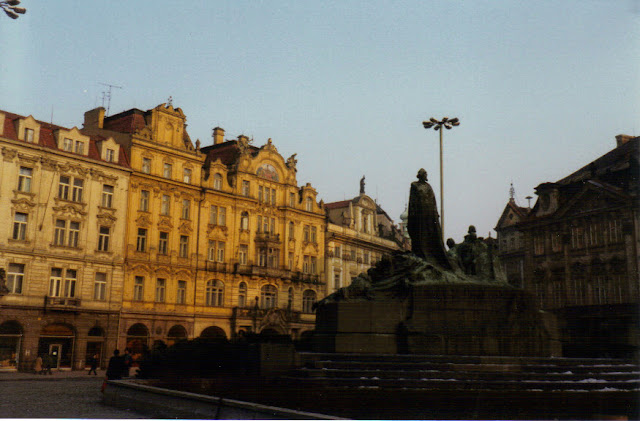 His first night in Prague was certainly memorable as well:

"After getting situated at my hotel for the night I was very hungry because I had not eaten all day and it was like 10 PM. At the front desk I inquired about a restaurant and was told there was a discotheque a few doors down. Hmmmm, not really what I had in mind, but it was the only suggestion, so I set out.

"I walked into a mostly empty large upstairs room and it took a while to catch the glimpse of someone working there. This was not American service! When I finally talked to someone we couldn't communicate, of course. I was asking for something to eat and for some reason the waiter said "orange". I thought OK, at least I'll eat an orange for dinner. But he brought me some weak orange drink instead! Needless to say I went to bed hungry that night." 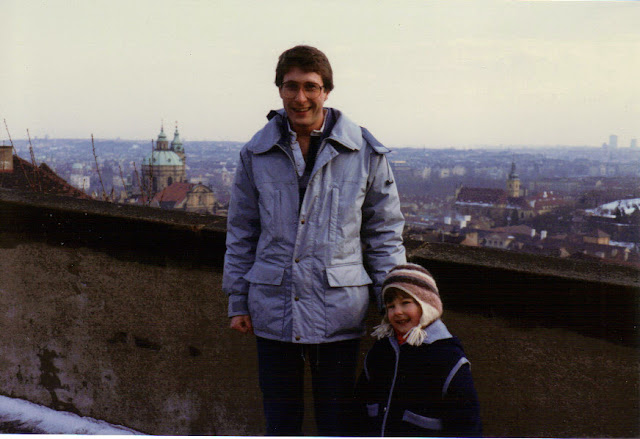 " I figured out the tram system and took it to my train friends apartment the next day and his wife made a wonderful lunch for me. I think I was the first American they had ever met. I gave the little girl a dollar bill and they all exclaimed "George Washington" as they examined it. We took a tour of the Castle and then went to his favorite pub (Mike and the man's little girl in the picture above, taken up by the Prague Castle).

"Later in the evening I took off from the hotel and walked along Václavské náměstí and found this stand up food cafeteria. I pointed at what I wanted to order and paid for it. Now my eating problem was solved for the next few days. Every time I was hungry I would visit the stand up cafeteria with the stainless steel tables!" 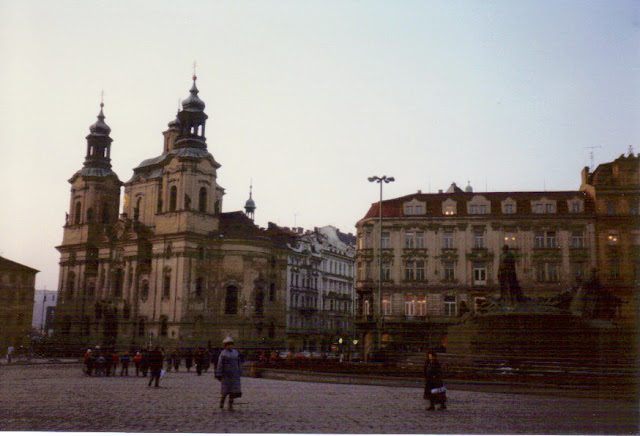 "I remember leaving after a few days thinking, 'I will be back'. I did make it back, probably 5 or 6 times over the years. Much of the old town is the same, but somehow more like a Disney version of a romantic Central European Capitol than the gritty working city that I saw in 1985.

"Buildings now get cleaned more regularly and since they don't burn coal as much, the black soot is mostly gone. On a few occasions that I've visited, the city seems overrun with tourists, which is a good thing, mostly.

"Somehow Prague still has a magical appeal to it and I'm drawn there on most every trip I take to Europe. I know I'll keep coming back...even though I know my way up to the castle pretty well by now!"

Thanks Mike, for sharing about that first trip here! It was 8 years later that I visited Czech for the first time, and then just nine months later, moved here.

Who would've ever imagined that when Mike first came to visit? Or when we were little people growing up in Coburg, Oregon?! 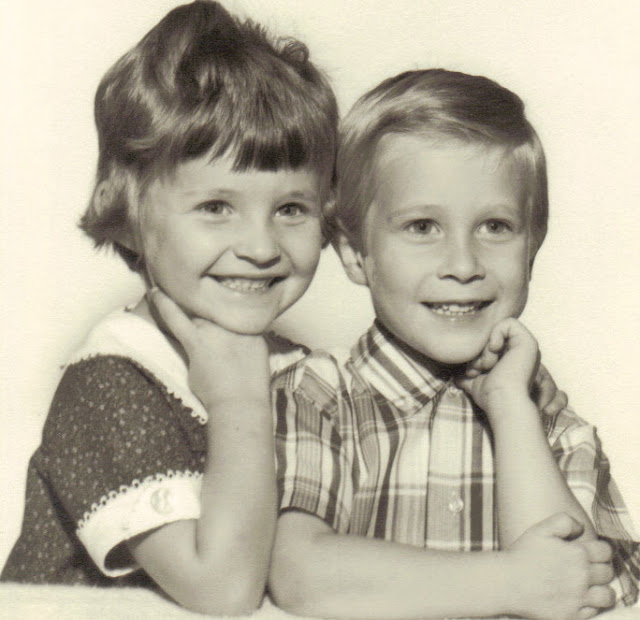