Having lived here in Czech for nearly 24 years means that some of our early youth group kids from Havířov (the first city we lived in) are now in their 40's!

But the even better part, is that some of those students who trusted Christ as teenagers have now been walking with the Lord for many years into adulthood.

Today, Dave received an email from one of those former youth group kids. It was to tell Dave thank you for the impact he made on his life, and that he is celebrating his 20th anniversary with the Lord today!

He included a letter that he still has in his Bible, a letter that Dave wrote to him the day after he put his faith in Jesus, when he gave him his first Bible. 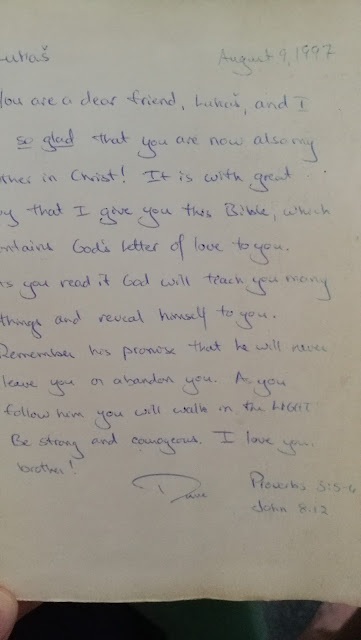 It is for this reason that we are here, doing what we do! We are still as eager as ever to be part of God's movement to raise up a whole new generation of disciples following Jesus.

What a privilege this life is, leading young people to Christ, discipling them, and cheering them on in their lives of faith.

And what joy to see fruit that lasts!
Posted by Living By Lysa at 11:12 PM